July 08, 2012
To quote Plato's Socrates only slightly out of context, I know only that I know nothing about chuckwagon racing. 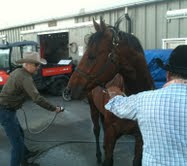 But I have spent the last few days at the Calgary Stampede and have gotten to hang out in the chuckwagon barns as part of ATB's sponsorship of rookie rider Codey McCurrach of Eckville. That means taking photos, posting updates via social media, drinking the occasional beer, hosing off the thoroughbreds, having the occasional beer, and hauling hay to the stalls of Primo, Bernie, Ernie, Googles, Mob and the rest of the horse team.

As for washing the horses, it's just like flooding a backyard rink. Except there's a giant horse wondering what you are doing, and an even bigger horse called Mike Obrigewitch who is wondering the same. But it's also the easiest post-race job there is. 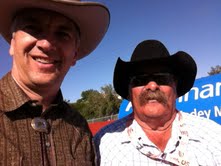 Mike is quite the guy with quite the stories, quite the face, quite the moustache, quite the heart. Mike was Codey's sponsor in the early years, and helped make a call that Codey's best chance to get to the next level  was to get to the next level of sponsorship. But he still travels with the wagon family. Ask him what the three most important qualities of a great chucks driver are, and he doesn't give you cliches. He takes his sunglasses off and thinks about it. Patience. Determination. Discipline. I would have thought courage and fearlessness would have made his list, but he says those are givens. And, of the three, patience is the key to unlocking success. 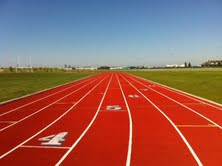 I was thinking of all this wagon wisdom this morning as I went out for a run around the Rotary track in northeast Calgary. Running seems to be the only time any thoughts come to me anymore. :) Shelagh and I still plan to run a half marathon in California this fall, so stampeding has to make for some jogging. I can't just go on stories and metaphors.

Two barrels, two knees. For the chuckwagon driver, the job is to not let the spirit (still represented  by the horses) knock over either of the barrels. Or else you pay with time. And there's never enough time.

Two barrels, two knees. For the runner, the job is to not damage either of the knees. Runners know horses just like chuckwagon drivers do. There are horses of pride and honour and there are horses of wanting to get a better time or catch the runner in front of you.

The barrels are too easily forgotten in chuckwagon racing. Certainly, there is more colour and thunder and speed elsewhere. But hit a barrel in your zeal,  and the rest doesn't matter.