July 26, 2012
For the longest time I thought Shelagh Of The Irish Spelling was a little crazy. She would lie there in bed, wired to her iPod, listening to podcasts as she drifted off to sleep, while I talked to her about things important to me, and our marriage. She was listening to things like National Public Radio's Fresh Air, This American Life, and Wait, Wait Don't Tell Me! And The Splendid Table and Spilled Milk and Stuff You Missed In History Class. And Garrison Keillor's The Writer's Almanac. Of course, Shelagh is a borderline insomniac, but, give her one thing:  she does put her waking time to good use.

And she's onto something. 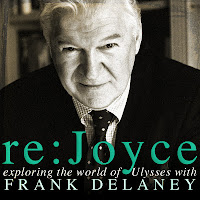 I am not at her level in terms of the number of podcasts that escort me into sweet sleep, but I have found one. * It's called Re:Joyce, and it's Frank Delaney's tribute to and guide through and analysis of James Joyce's Ulysses. It is published/shared/posted/whatever the word is these days every Wednesday, and I find myself looking forward to Wednesday for the first time in my life.

In the current episode, Delaney jumps into one of the famous thickets in chapter 3 in which Stephen is imagining himself in the home of his uncle. I think.


Cousin Stephen, you will never be a saint. Isle of saints. You were awfully holy, weren't you? You prayed to the Blessed Virgin that you might not have a red nose. You prayed to the devil in Serpentine avenue that the fusby widow in front might lift her clothes still more from the wet street. O si, certo! Sell your soul for that, do, dyed rags pinned round a squaw. More tell me, more still! On top of the Howth tram alone crying to the rain: naked women! What about that, eh?

Of the red nose reference, Delaney says this demonstrates Joyce's reductio ad absurdum. "He just wants to make nonsense of his Catholicism," Delaney says, going on to ask: "That's not something worth praying for, is it?"

I would like to suggest a slightly different reading based on the piece of ancient wisdom that has us remember that man, unlike other members of the animal kingdom, is the creature who feels shame. Throughout literature, shame has taken the colour of a red face. Memorably, Mark Twain re-minted the teaching this way: "Man is the only animal that blushes. Or needs to."

I don't know Stephen Dedalus like Frank Delaney does. But I think it's reasonable to try out the thought with Delaney that it is worth Stephen's praying to the Blessed Virgin to be protected from the lack of modesty, the embarrassment that manifests itself in a blush, or, perhaps, that red nose. The power of that prayer, the need for it comes from Stephen's assessment of his other side, his darker, devilish side.

An investigation of shame surely belongs here in this description of Stephen's base, unrestrained thoughts and words about women. Isn't that the arena, that is, the relations between the sexes, in which we first see shame, and start thinking about it?

As I read more of Ulysses, I will keep my eyes open for faces that are red.

Thanks, Mr. Delaney for our asynchronous conversation about the humanity of Joyce.

(* By the way, Shelagh Of The Brittle Sleep insists she told me about Re:Joyce. Thanks, dear. Time for bed now. It's late in Edmonton.)