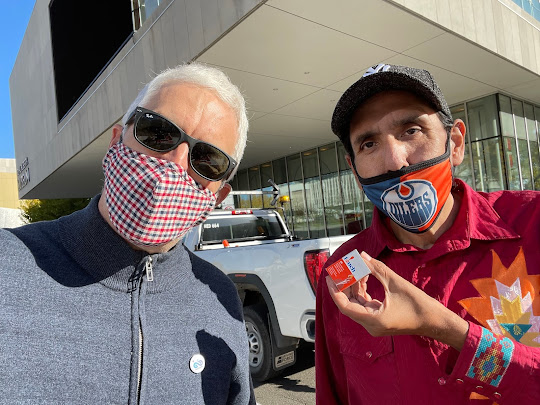 Thanks for stopping by the Three Things podcast.
Here's my bet. Maybe it's a long shot, but, here it is. If I can do a better job noticing the things I notice that make me happy and grateful each week, and then say those things out loud, then I won't feel, when it's time to add things up, that I have wasted my time. That's the judgment I fear the most. You wasted your time, Glenn Kubish!
Here is this week's Three Things podcast:
1. Firestarter
A couple of days ago, I found a black Bic lighter on the sidewalk downtown. I don’t smoke, I have virtually no need for a lighter, but whenever I see a discarded lighter, I pick it up. It’s a story in my hand. Scene 1: Man walks across Jasper Avenue. Scene 2: Man spots lighter, wonders if it works, spins spark wheel, waits. Scene 3: Finger of flame emerges. The end. 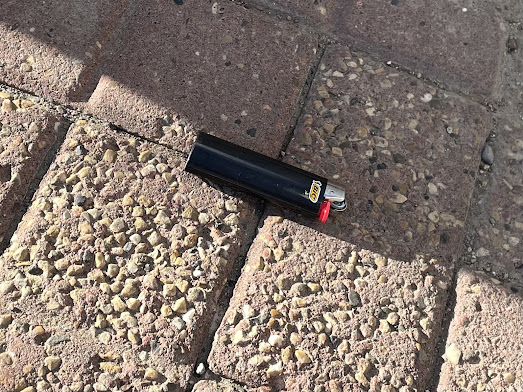 Standing there on Jasper with my new lighter, I flashed back to a conversation about fire with Wallace from the Alexander First Nation a few days earlier. We were hanging out together watching City crews paint a commemorative crosswalk in Edmonton. He had helped with the fire at the ceremony before crosswalk work started. He was in a theorizing mood. He held up a box of matches.

“The original flame came from lightning, that’s where we got it from,” he said. “What did I call this earlier? Lightning in a box. It’s all about technology, like I said.”

He continued with the history-making question: “But how are you supposed to harness that lightning for future use? 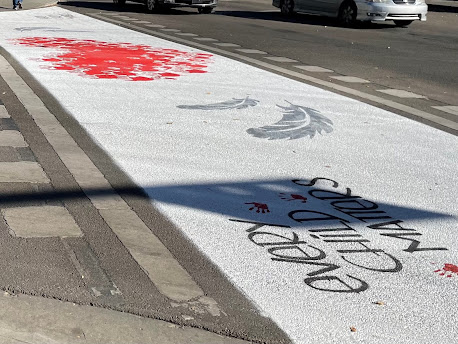 A match stick or a lighter are technologies, he said. Yes, I thought, those items do capture and do hold fire and play it back on request.  As I watched people with cellphones take pics of the crosswalk—it’s on 103A Avenue and 99 Street and features Every Child Matters artwork—I saw that their phones were like matches and lighters. In photography, the light of an image is captured and stored and brought back to life when swiped to. Photo-graphy, literally, light writing. Wallace also helped me see why the Bic company makes pens and lighters.

2. Tomatologist
There’s a uBic-uity to lighters that masks the technological marvel they are. Tiny, mobile fire factories. Amazing, and now commonplace. Like a ripening, reddening tomato. This week, I’ve been taking photos of a cluster of 11 tomatoes still on the vine in the back container garden.  My friend Alan is precise with his words. He typically finds the right term for whatever he’s describing. Except when he’s talking about coming back into the house from the tomato patch. 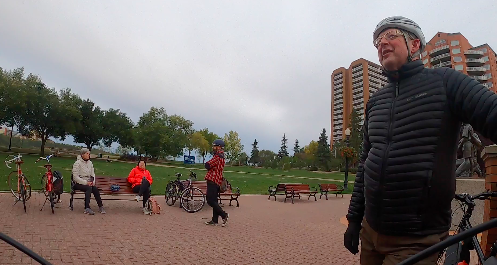 “When I went back into the house and sat down on the couch, at some point I put my hand up to my face and that deep, green tomatoey smell, oh, like, like, wow,” he said.

Alan said tomatoes suffer a bit from their everywhereness. They’re in supermarkets in abundance. They’re on restaurant plates as garnish. Just as he grew tomatoes, he grew into tomatoes and tomatoes grew on him.

“More, probably, as an adult that I came to not take tomatoes for granted. You know, later, when you taste a good tomato...this...this is something.”

Growing tomatoes adds to the experience. Watching them slowly detonate from green to red is a slow-moving but moving show. I’ve grown attached to my tomatoes. It’s why each night this week, as the temperature flirted with frost, Auntie Shelagh and I covered our the tomato plants with sheets, so, the next morning we could raise the curtain and watch the show together for one more uncommon day together. 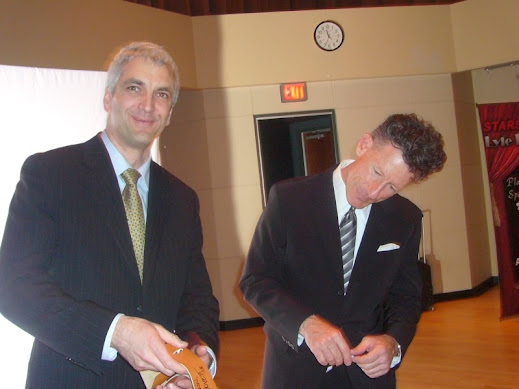 3. Family reservist
If you happened to see a grey-haired dude walking across the middle of 101 Street on Saturday morning, October 2, 2021, looking at his phone, then jaywalking right back, that was me. I immediately retraced my steps after seeing that Lyle Lovett had tweeted me back, and I was off to share that social media news with Auntie Shelagh, who was at Headlines in Manulife, getting her hair done for our son Alex’s wedding later that day. Alex met a woman in Italy a few years ago, and, mama mia, they’re married now. It’s a big world. Viva gli sposi! It’s also a small world. Kendra was visiting Italy. She’s from Drumheller.

Anyways, Shelagh and I are Lovett fans. He has a song called Family Reserve. I love the song.  It makes you think about how memories are stored in music and in photos. In the song, Lovett’s Uncle Eugene dies on October 2, 1981. On a flier, as a fan, I tweeted condolences, and  mentioned that our son would get married on that day 40 years later. From Klein, Texas, or wherever he had his boots up that morning, Lovett tweeted back a thanks, explained a little more about the meter in the song, talked about his cousin Burke, whose birthday it was that day, and about his great uncle Alexander, who started a funeral home in 1922.  We went back and forth with family stories for a bit. I relayed all of this to Auntie Shelagh while her head was in the sink at the salon. I realized in a new way how time washes away so much, and how a particular family is the only institution that has an interest in preserving the memory of the particular people who make it up and give it life.
#familyiseverything was the hashtag Lovett used.
Have a good weekend, y’all. See you down the road.
Three Things podcast, episode 39, features sound from Wallace and Alan, original music from BrendanMcGrath and end bells courtesy Slavo Cech: