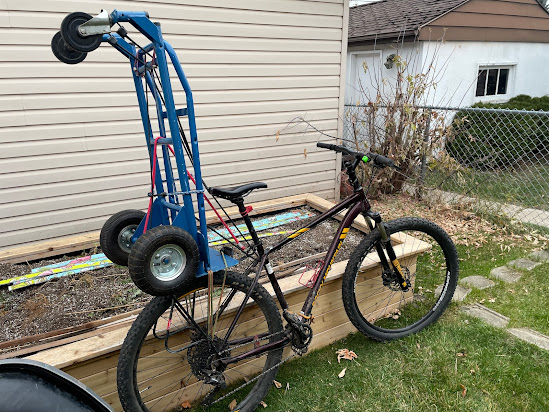 Happy end of the week, y’all!
Each week, I try to notice three things I noticed that made me feel happy or grateful. Noticed that I noticed, because it’s good to try to be semi-conscious. Happy or grateful because anger and outrage, because how’s that working for everybody?
Here's this week's Three Things—episode 41 (5 minutes, 3 seconds):
1. Hauling dolly!
There are days, we all have them, where you have to haul a 50-pound delivery dolly downtown and your driver’s licence is two years past its renewal date, so, putting the wheeled contraption in the trunk of the car isn’t going to work. And there are times, we’ve all felt those times, when your commitments to yourself, your very identity hang in the balance, even with mundane challenges like how to get the dolly downtown. And there are, to keep everything together, we all have them—bungee cords. 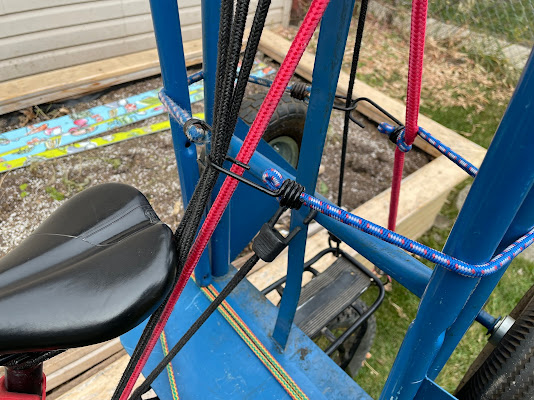 I used eight bungees to secure the dolly and its handle to the back rack of my mountain bike last week. It was a spider web, a multi-coloured, stretchy cat’s cradle that kept the dolly in place. Which allowed me to keep in place my agreement with myself to try, whenever I can, to use my own energy to move myself on bicycle, even if I have to haul awkward objects. I can’t do it alone, of course. It helps to have a good bike, and mobility lanes for protection. I need friends who, I know, face and meet the same challenges.
Bungees pulled tight, I pedalled slowly at first, getting used to the extra weight, getting a feel for the load around corners. It held. Secure felt good. On 142nd Street, a dude in a pickup glanced over at me. 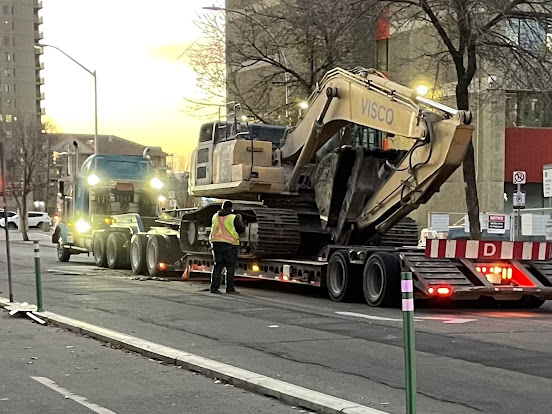 A couple of days after the dolly transport episode I was back downtown. On 102nd Avenue workers had stopped traffic while a driver hauling a massive excavator on a flatbed trailer was tightening cinch straps around the caterpillar tracks—tugging at them, testing them, trusting them. He was pulling a unit worth half a million bucks. My dolly, about $250. Neither of us could afford to have what we were hauling come loose. Both of us, all of us on the road, actually, need ties that bind. 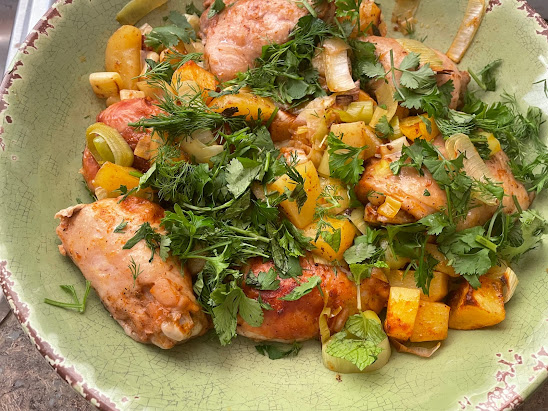 2. Auntie Shelagh in the kitchen with a knife….

For a couple of years now, I have collected the things Auntie Shelagh says as she talks to and about food in the kitchen. I write it all down so it doesn’t get away. Here are some highlights:
Is there anything better than a lime?... Is there anything better than a lemon?... I love parmesan cheese...Look at an onion, just look at it...I love the smell of cilantro...It’s the smell of mushrooms. I have discovered the mushrooms are the key!...I love mint...That’s it, can you smell the squash? It smells great... Wow, smell that, wow, fresh basil...My gosh, the smells coming out of this roast are unreal...It’s so pretty, flaky salt is the best...When you come upstairs you can smell the herbs..I just love chives. Snipping them on! I am not going to skimp on chives. They’re pretty. Like a palm tree...And THAT is what a vanilla bean smells like!..I mean, really, who doesn’t love a shallot?...I forgot about the carrots. Nice carrots...Oh, man, I love the smell of curry powder...Is there anything better than an orange?...Wow, the smell of graham crumbs!...I love the sound of pouring coffee...I find pomegranates amazingly magical...Look at all the roasted tomatoes! So pretty!...I love how beads of water form on cut vegetables. It's like sparkles of snow...All this sugar and butter smells good...Celery, wow.
It’s not just a kitchen. It’s an ol-factory. All the measuring, sawing, joining, the power tools, it’s like being with an aproned woodworker, and then you eat what’s been carved out. Except that it all goes somewhere, all this love cooked up, to be recalled at the sight of beads of water on cut vegetables, at the smell of mushrooms and at the sound of coffee pouring. 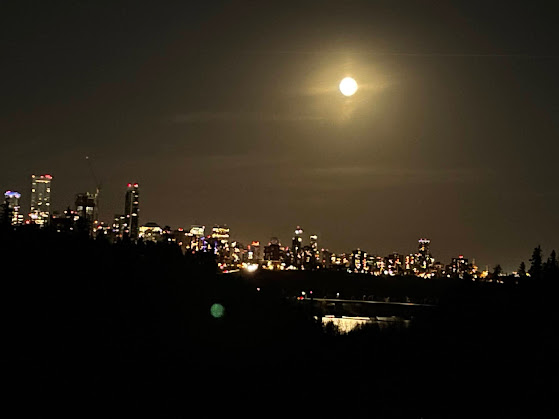 3. La bella luna!
The aurora borealis have been getting a lot of love here lately, and, why not, what’s more breathtaking than a night sky pulsing with ghostly wisps of green, like some giant surreal x-ray? Well, the moon over the MacKinnon Ravine is my candidate. And Luca’s, too. I met Luca one evening last week on the 142nd Street bridge over the ravine. He and his camera and his tripod were waiting for the moon.
“The rise point is just to the right of the Stantec building, the tall tower,” Luca said as he pointed east toward the shimmering skyline. “So, you won’t see it for a few minutes and then it should cut through behind the new construction and the Pearl and head up above Telus.” 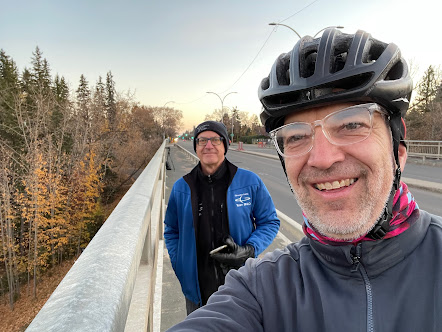 The traffic streaming by was immune to the pull of the moon. Below, a coyote ambled insouciantly across the ravine floor. Above, the almost-full moon appeared and then lifted up and hung there like a giant pop fly during a night game under the lights, as if it somehow was part of the neighbourhood.
Have a heavenly weekend, friends.
This week's podcast features sound of the Groat Bridge geese, Luca, traffic and Auntie Shelagh: