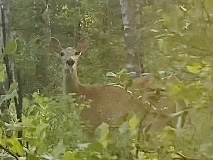 My bet is if I don’t consciously try to notice three things that made me happy or grateful each week, I’d notice only the things the algorithm wants me to notice, which would not be cool.
So, I try to notice what I notice, and say them out loud. Here's this week's Three Things podcast.
1. Dough
The pandemic has imprinted a few new habits on me. I wash my hands. I try not to touch my face.  For whatever reason, I have begun flossing my teeth.  I bake bread, too.
My favorite part of baking bread happens after the stirring, mixing, beating and kneading, when the dough, in a ball, sits in a buttered bowl beneath a white tea towel, and, over the next 60 minutes, abracadabra, rises imperceptibly. And then my favorite part of the process happens, the punch down, which is what Auntie Shelagh typically takes care of.
And then my favourite part of baking bread: the forming of the risen and punched down dough into shape. In one of the folds, the dough looks like the kind of envelope you put in the mail, the back of the envelope where you seal the flap to the seams. Later, we’ll use a knife to open the envelope and get at the loaf letter, scratched out from home.
2.  A deer
Just off to my left as I pedalled along a piece of leafy trail in the river valley last week, a deer bounced into the trees. The twigs went snap snap snap. I touched my brakes and stopped and looked into the criss-cross of branches. A bird whistled. In the tangle, thirty feet or so away, the deer had also stopped and was looking back at me. We stood there for about 15 seconds or so, just like that, recording each other, me with my phone, the deer with its big ears like listening posts on a border line.
Then it turned and, tail up, sprang away and disappeared. The leaves flipped in the wind like a magician showing you both sides of the card before the trick. I didn’t know if the thrill came from seeing the deer or being seen.
3. Two pioneers
We get pioneers wrong if we think of them as old people, now dead, who didn’t know they could smile for photographs. Pioneer, from the French, pionnier, meaning foot soldier or one who prepares the roads for others. Which makes my friend Brett Bergie a kind of pioneer. A couple of years ago, Brett ultra-pedalled her Brompton from Calgary to Edmonton in 14 hours.
Brett came to mind last week when Australian pro cyclist Lachlan Morton finished his Alt Tour de France. Morton is not in the actual tour, but he pedalled solo the entire length of the route, including the 2,000 or so kilometres of transfers between stages that Tour de France riders cover in their team buses. He carried his gear, tented in fields at night, found food, fixed his own flats, and got to Paris five days before the race itself. He raised money for communities where kids most need their own bicycles.
Morton averaged 306 kilometres a day, not quite as impressive as Brett’s one-day 346, but, chapeau to him, too. On the road where the powerful work beauty into shape, where a story is written over the same old story, there’s still room to lead the way, even today.
Dough, a deer and pioneers—three things from Edmonton this week.