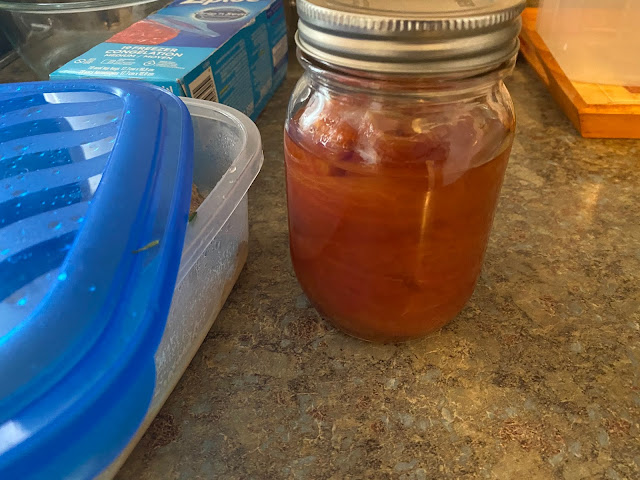 It's the end of the week, a time to capture three things that made my happy or grateful over the past seven days, and, before they vaporize from memory, add them to the other side of the scales.
Here is this week's Three Things podcast (4 mins).
Here's this week's list.
1. Tomatoes, 2020-2021  🍅 🍅
On the ant-grasshopper spectrum of how best to live life, toward industry or toward abandon,  it’s more fun to be the grasshopper. But it’s satisfying to be the ant. And tasty. Last fall we jarred tomatoes from our container garden. Some tomatoes, some Mason jars, some time in the basement. Last week, we opened a jar to juje up a dinner of pork and rice. Standing in the kitchen, unable just to be happy, I asked the jar of tomatoes why I felt happy. A voice replied.
"Why not?" said Auntie Shelagh.
"We grew them. We preserved them. They taste great. They didn’t go to waste. It’s pretty cool to grow your own food. Or, maybe, it’s just because they taste good."

All good points, Auntie Shelagh. Lots to chew on there. That idea of not wasting is staying with me. With a little lemon juice, some salt, we preserved tomatoes that time otherwise would have ruined, and, somehow, at the same time, we didn’t let time waste.
And they tasted great.

For seven straight days in Edmonton recently, the daytime high was hotter than 30 freaking degrees Celsius. The inferno lessened last Friday night with rain sounding like a drummer playing double strokes slower at first, then faster and faster and faster until the sound of the rain sounded like applause for the drum solo. For overheatedmontonians like me, it was percussion to the ears.

3. Vive le Tour! 💛  🇫🇷
The Tour de France happens in France, of course. For the riders and the teams and the roadside fans, France is where it all goes down and goes by. For the rest of us, the Tour happens on a screen. It’s a mini- series shot and performed live. Who’s doing the performing, though? The camerapeople on motorbikes and in helicopters, for sure, the announcers, yes, the cyclists and their machines, sans doute. (Shoutout to Canada’s Michael Woods for some wicked work in the mountains.)

But the mountains are the stars, too, the mountains, the villages, the fields, the cows, the chateaux, the cemeteries, the sunflowers, the vineyards, the fields of lavender, the people on the side of the roads waving from beside their white camper vans, or taking video, or holding giant pretzels, the blue and orange Leclerc hypermarket signs, the architecture, too, the buildings that take centre stage for a few seconds, whether an alpine chalet in Tignes or La Rotonde Ferroviare in Chambery, a locomotive roundhouse built in 1906. France itself is the premiere étoile, the first star, of this streaming show performed on 21 stages.

It’s why I can watch 4 hours a day of slow TV racing involving tactics from the likes of Wout van Aert of Team Jumbo-Visma without being derailleured.

Have a good weekend and good week, friends, stay in the saddle, keep climbing, attack only when you have to!
🎧 Check out the Three Things podcast for some sweet sounds:  tomatoes, Auntie Shelagh, the rain, le Tour.