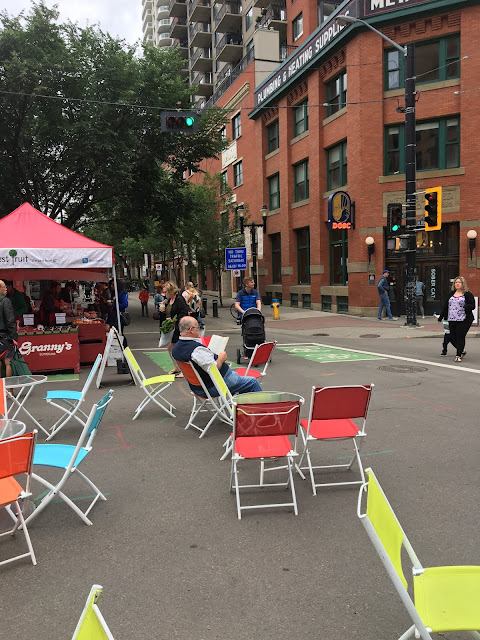 Unlike a book held by the person reading it, a smartphone—opaque, impenetrable, typically black in colour—does not betray the content being consumed by the person holding it. I knew, for instance, that the MacEwan University student we met outside the Dirtbag Cafe last week had given his attention to Finders Keepers by Stephen King. Roddy Doyle was the companion of the woman walking across the Groat Bridge as we pedalled by this afternoon. The man sitting in a red chair at the downtown farmer's market was considering Harari's argument about the future of humakind in Homo Deus. What the teenager at the table across from ours at Filistix was looking at while his mother and grandmother talked to each other, no clue.

Compared to the protective casing of a smartphone, a book, with its illustrated and printed dust jacket, is a giant-sized billboard, and an invitation to engage in small-talk conversation. "What are you reading?" is easier to ask when you already know a little bit about King. Or about Doyle's poignant prose. It's harder to imagine striking up a conversation with a stranger with no more kindling that a smartphone in their hands. "What website are you looking at?" is creepy in a way that King isn't.

This morning across 142 St, sitting crouched on a small pile of rocks that spilled off his front lawn if he had had a front lawn, which he didn't, because, where there is typically grass in a person's front yard, here there were just rocks, a man in a red muscle shirt sat tossing smooth white ornamental stones onto the rocky landscape in front of his house.

"It's like Sisyphus," Shelagh said as we pedalled by.

I reached for my smartphone to take a pic. I like to record these moments and these characters and consider them later. But this was not a smartphone moment. This was the cover of a book.

I crossed 142 and approached the man in the quarry. 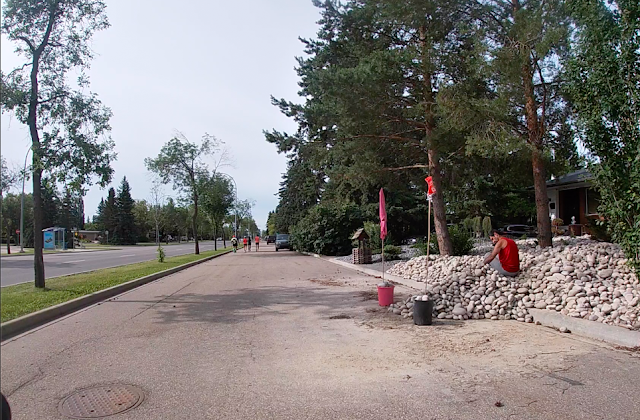 "How many rocks have you thrown into the yard so far, or did I make you lose your count?" I said as I rolled up. The man laughed. We got to talking.

His name is Eugene and he was looking for an alternative to a front lawn that needed water and work and more water and work to keep it looking good. He purchased 24 yards of smooth rocks to complement the limestone already spread on the south side of his sidewalk. He had read Harari.

"There's a long wait for it at the library, but give me your email address and I will send you the link and you can read it all," he said.

In this book by Harari, Homo Deus, that is, the author points out the medieval roots of the modern subdivision lawn, how what started as a visual proof of a royal's or a nobleman's wealth, a lawn, useless for animals to graze, useless as a source of food, useless for anything but a sign of the wealth it takes to have and care for useless things, persists as a sign of status for those whose homes are their castles.

It was a fascinating conversation. I spent a few minutes chucking rocks with Eugene. We shook hands and we said see you later. 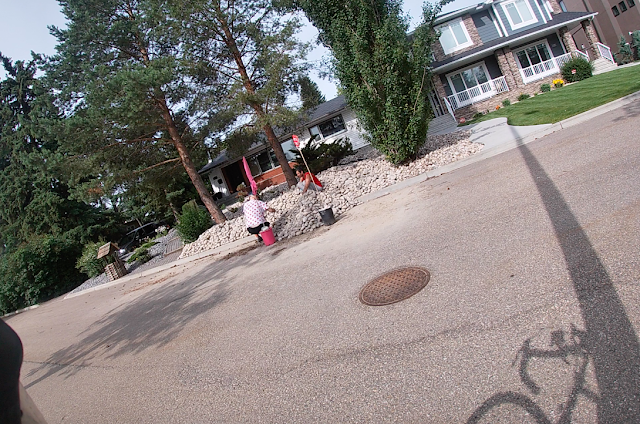 I walked away brushing the rock dust off my shorts, thinking a little bit about the new lawn in front of our house, remembering my friend Fitz saying over breakfast on Saturday that he's pretty much had it with yard work, how I feel the same.

Thinking how a front lawn isn't much to think about until you start thinking about it.

Realizing the rock tossing, the meeting Eugene, his quoting Harari, all of it would have been a longer shot if Shelagh and I had communicated by in our smartphone on wheels.