A note from Edmonton 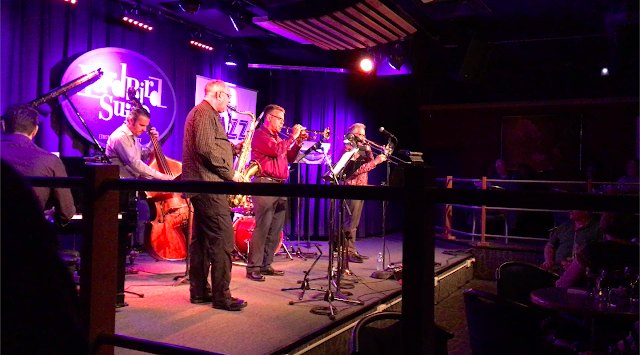 Halfway through my second beer of the Edmonton Jazz Ensemble's reunion at the Yardbird Suite, I saw it all quite clearly. I know, I know.  A jazz club on a June 30 afternoon is a peculiar place for illumination in Edmonton. It was 23C outside, blue sky, soft wind, the kind of gentle weekend day that Edmontonians pine for during the winter months up here on latitude 53, the kind of day to be outside in the river valley—or, at least, to luxuriate in the walk across the warming asphalt from the car to the mall. But there I sat, inside, in a kind of reverse hibernation den, and, with 150 others,  listened to the sextet dig into songs from 30 years ago.

The music was superb, as far as I understand jazz, which is not far. I love jazz, I marvel at the way its practitioners are able, to my ear, to detonate single notes and then walk around and play in the fallout. Like they are inside a snow dome of their own shaking. I love the horns, especially. Watching Jim Pinchin on tenor saxophone, Al Jacobson on trombone and Sean McAnally on trumpet, I saw those jazz musicians for what they are: human beings who stand on stage with their lungs twisted and hardened into brass visible on the outsides of their bodies. There is nothing as natural as artifice.

I am thankful for jazz, too. Life is emotionally complex. Music that matches that complexity, music that suggests other ways of being in the world can be more of a consolation than anything else.  But understand jazz from the inside? No. Not a chance. I come from 3/4- and 4/4-time people. Good people from northeast Edmonton. People of the waltz and fox trot and polka in the church basement. I love jazz, I am grateful for jazz, but I didn't understand how Sean counted the players in with a whispered "1-2-3-4," and then a nod, and then waited a couple of seconds, and then, when the music started, how the colour purple happened to me. I went with it, though. I drained the beer. I held the empty glass up to one eye and watched through the thick glass on the bottom the refracted musicians playing in whatever time signature they were moving in. Cool.


Sean, Jim and Al (backed by Chris Andrew on piano, Rubim De Toledo on bass and Joel Jeske on drums) played tunes from the EdJE's 1989 recording, Something's Here, along with a song composed by Pinchin (In the Shadow of Kilimanjaro) and another by Wayne Feschuk (Roadrunner), an original EdJE member who was in the audience. Back in the day, EdJE was a Jazz City-sponsored supergroup composed of some of the best young jazz players in the city. They played festivals across Canada and toured Europe. They won the Alcan Jazz Prize. They were nominated for a JUNO. In time, they scattered. Al hung out in Germany. Sean went to New Jersey where he teaches music at a prep school and, as an ex-patriate, coached the women's hockey team.

Through the years down the shore, Sean has protected his Canadian perspective. That was on display, too, between songs at the Yardbird. He had some things to say to his hometown audience. So we could better understand, he used words. He mentioned that his mother is 100 years old. A cheer went up. He talked about Saskatoon berries and Saskatoon pie and Saskatoon soda. He got lost in a meditation about the old Hinterland Who's Who interstitial commercials we all watched growing up on CBC. "If you want more information about the loon...." He carried a beer on stage in a Tim Hortons paper cup. He riffed about toonies for no other reason, he confessed, than to say "toonie into a microphone." He celebrated the musical tradition he is a part of that traces back to American jazz and blues singer Clarence "Big" Miller, whose sculpture stands out front of the Yardbird Suite, and Edmonton pianist and bandleader Tommy Banks, whose variegated portrait hangs in the Yardbird foyer next to saxophonist P.J. Perry's. Perry himself, still making music, stood just inside the club's doorway and listened.

Introducing Spring Breeze, he explained the title came from the caress of air that greeted him one day in Edmonton in the old Victorian house he shared with musician friends on 117th Street after he had opened and unsealed a draped and soundproofed window. The foam baffle hadn't been enough to keep the police from visiting every so often. (The police reference ticked off another box on his Canadiana tour: peace, order and good government.) What struck me with momentary force was the way he said "117th Street." Or, maybe, the different way I heard it. I imagined hearing a New Yorker say 117th Street and how, to me, that would have sounded like such a place up somewhere in Harlem near Columbia University close to Marcus Garvey Park. Say 117th Street in Edmonton and it lands more like a nameless piece of the mundane grid imposed on the city. Unless an artist says "117th Street." Then it becomes a place in words and in reality.


Introducing his arrangement of Tom Waits's Lonely, Sean explained how the tune, so new that the players didn't have the music charted in notes or chords, came to be. Last December, Sean and his wife and his children were planning to visit Edmonton for the family matriarch's 100th birthday party. Accommodation proved a challenge. Vrbo wasn't working out, airbnb wasn't working out. Through a family contact in Edmonton Sean learned about a house, one neighbourhood over from the Lynnwood neighbourhood where he grew up, whose occupants, a husband and wife, were to be in Europe at the same time the New Jersey McAnallys were to be in Edmonton. House seekers and house offerers had never met. Via email, the house was gifted.

"My wife said what kind of weirdo would do that?!" Sean recounted to the Yardbird crowd, who responded with polite laughter. When it subsided, he said sorry (another check). "Well, I shouldn't say weirdo. I was embellishing. And I said, no, no, that's who we are. To me, it seemed perfectly normal. It was obviously incredibly generous. But I grew up in Edmonton. I get it. So, we did it. We stayed in this house."

As it turned out, the couple in whose house the McAnallys stayed had a turntable downstairs, and taste in vinyl. From a drawer Sean's son Matt pulled out Closing Time.

"I went, Oh, my God! Because I listened to that I can't imagine how many times," Sean remembered aloud. "In fact, now listening to it again with him and since I realized I had been influenced by Tom Waits sort of subconsciously."

Sean did what musicians do. He paid for his family's room in music, with a world debut of the Lonely arrangement, with his house-sharing friends as his guests in the crowd. They met after the show. It was a vintage Edmonton story and encounter. Sean left them with a canvas-mounted photo that had been on an easel on stage with the band. His son had taken the photo at high noon on December 22, 2018, a short walk from the house. It captured the elements: spruce trees, ice chunks in the river, the sun low in the southern sky. (Each player had a photo copy of the pic as his chart during High Noon. Being a collector and a petty thief, I took one home, along with the set list.)

Toward the end of the show, Sean sounded one last note. He thanked the jazz volunteers in Edmonton, and then turned to his fellow musicians on stage, humbly. Sean shared with the audience the inexpressible joy a composer feels when his paltry notes are given life and dimension and colour by other players.

“My name is out front, but that’s not true, not by a long shot,” he said. “They reinvent the music at a level that is just outstanding.”

And then, motioning towards the other members of the Edmonton Jazz Ensemble, Sean gave us two final words.

The Yardbird Suite sits on Tommy Banks Way near the southern tip of Edmonton's historic Strathcona neighbourhood. A little north, you will see the lovely river valley crowned by the new Walterdale Bridge. Back south a few blocks, you'll find the trendy Whyte Avenue shopping district lined with pedestrians and bicycle riders. Both valley and sidewalk collected self-summer-starved Edmontonians on the sunny afternoon of June 30. For two hours inside the dark of club, a jazz band reunited, renewed its music, and its leader collected the Edmonton he knows—and gave it back to us.