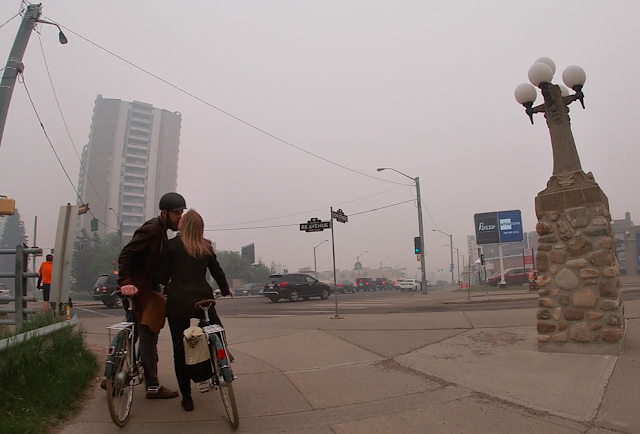 In the history of kisses recorded during a forest fire, this was, perhaps, the smokiest.

I had just crossed the High Level Bridge and was pedalling up the hill to meet Shelagh at the Sugar Bowl when, all of a sudden, there they were, two strangers on their bikes, smooching like there was no tomorrow, while a thick, brown-grey shroud of wildfire smoke embraced them.

That's a great shot, I thought, and checked to make sure my handlebar Go Pro was rolling. I decided to make a line for them. How close could I get? As it turned out, I could have stopped and started singing Jason Isbell and they wouldn't have noticed me.

I tried to keep the handlebars steady, and smiled as I slipped by. Somebody whistled.

At the Sugar Bowl, Shelagh and her bicycle-riding friends from MacEwan had the patio to themselves. I ate a lamb burger and drank Delirium Tremens from an elephant-trunk-shaped goblet. There was no conversation from the next tables. Nobody was at the next tables. It was eerie.

We cycled home through the pall. I reviewed the kiss video and shared to Twitter a screen shot of the couple's private moment in public. 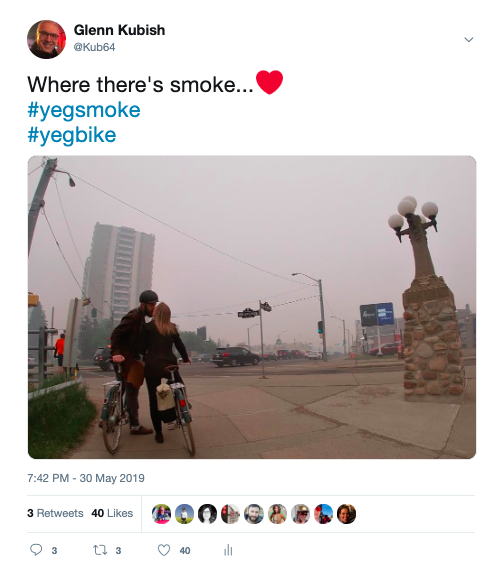 Half of my picture was of my bicycle-riding friend Sandra. The other half was her partner Jeremy.

"My reaction was pure joy that someone had captured our love so perfectly," Sandra told me a couple of days later. "We had no idea you got so close." You don't say.

Sandra said they don't get to see each other as much as they would like and what I witnessed was the rare occasion they were able to bike from downtown together.

"We were saying our goodbyes" she said.

Years ago I saw a news story about automobile drivers in Moscow who had taken to recording their daily trips as a way to counter, in the event of a crash, the testimony of corrupt investigators. The camera's point of view provided objective witness. It also captured the remarkable, like the day a dash cam captured a plane crash near Vnukovo International Airport . 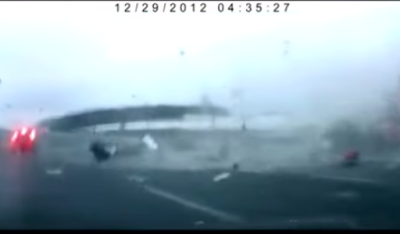 I decided that day to put a camera on my bike handlebars to not miss the two or three chances I would get to record the remarkable things, like plane parts, that fall to earth. Like forest fire ash. Like a kiss on 88 Ave in Edmonton.