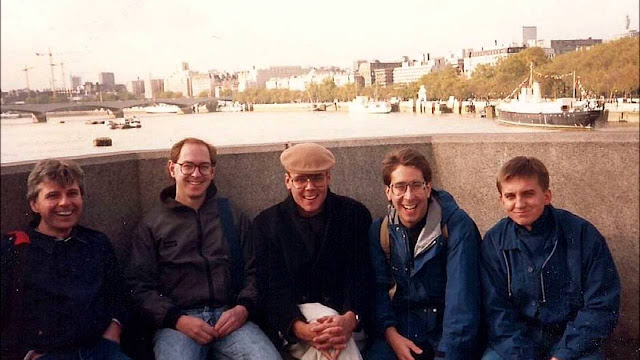 In March, when it is dark outside in the early evening in Edmonton, Shelagh (child 9/9 in her McAnally family) sat with her brother Sean (8/9) at a table with Al Jacobson at his house in Bonnie Doon.

Thirty years ago, Sean (trumpet) and Al (trombone) were turks in the Edmonton Jazz Ensemble (EdJE). They won the Alcan Jazz Prize. They played all the jazz festivals in Canada. They were nominated for a Juno. They toured Europe. They were big deals. For me back then, new to the McAnally family and its circle of characters, Sean and his bandmates (Al, Jim Pinchin, Wayne Feschuk, Marek Semeniuk, Tom Foster) were exotic. I was from the north end. I listened to Nazareth. They knew about Miles Davis. The way they moved was in a foreign time signature.

That night in Bonnie Doon, Sean, back in his old city from his home in New Jersey, and Al were talking about what is now only a little over a week away: the 30th anniversary EdJe reunion concert at the Yardbird Suite.

"I told [Edmonton Jazz Festival's] Kent [Sangster], you know, we're coming up to something here, how about having us come and play the Jazz Festival?" said Al. "I said, I'm sure the guys will be available. And we've got the music, we've got the chops, we're playing better than ever. Kent knows that."

"Kent said what about this and that?" Al said. "I said, great, let's talk tomorrow."

I decided to try a question.

"Are you trying to be true to the music you composed then?" I asked. "To replicate? Or to play with what three decades have poured into you?"

"You guys are older but the notes are the same," I said.

Then Sean tackled my question about the same notes three decades later. Via an esoteric meditation about someone named Barry Harris and something called the bebop scale. And then Al soloed his own thoughts about what will be different playing the same notes 30 years on.

I hit record while they did:

With Shelagh, I'm going to the Yardbird on June 30th to listen to old notes played new and to improvisation played with three decades of life experience. Sean and Al and Jim (tenor saxophone) will be back. Sandro Dominelli is on drums, Chris Andrew on piano, and Rubim De Toledo on bass.

This will be vintage Edmonton.