A scene in the alley 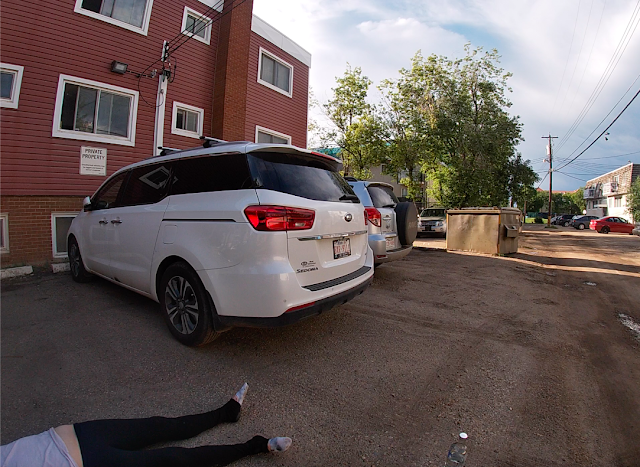 The man lay on the ground, face up, eyes closed, rib cage lifting and lowering slowly beneath a t-shirt worn inside out, the letters D-E-T-I-N-U running backward across the shirt, nothing between him and the oblivion of sky. His right arm was pointed straight down along his side, his left bent at the elbow and pointed up. His legs, slightly parted. He had been wearing blue and orange flip flops. They were at his side. The man, a section of his abdomen exposed to the air, presented the aspect of a crime-scene body before detectives trace with tape its shape on the ground.

"I'm going to call the cops," I said to a young man walking across the alley toward me. In one hand he carried a 26 of Absolut vodka, blue letters on the bottle, the bottle half-empty. In his other, hand a black smartphone.

"Good idea," the man said, placing the bottle and the phone on the ground next to the man lying prone. "These are his."

"What happened?" I asked.

"He tried to break into my roommate's car."

In my ear a deep voice asked: "Police, non-emergency line, do you have a complaint or a question?"

I never quite know how to answer that question. I explained the situation as it had happened to me. I was cycling home along the Oliverbahn. I glanced down the alley. I saw the shape of a person lying in the driveway of a walkup apartment. I tried to talk to the man, who just moaned and then stopped moaning. I stayed there to make sure no one drove over him.

Why isn't the person whose friend had his car broken into the one who is calling? the officer asked.

I had no idea how to answer that question.

"Okay, then, we'll send a car," the officer said after taking my information.

It was a strange 10 minutes. From the open window of the apartment suite just above us, the sounds of supper being prepared. People walked by and looked. Cars curled slowly onto 102 Ave from the laneways. The wind shuffled sunlight through the trees. A woman asked if everything was okay. I explained what I knew. She said thank you. The man on the ground didn't budge. A bird whistled.

A police vehicle stopped. The officer got out. He wore blue nitrile gloves. He poured the vodka onto the ground. And then directed the seven words you never want directed at you.

After a bit, the man stirred. The officer told me I could leave, and thanks for stopping. I circled the block. Coming by the scene again, the man was already off the ground. Five minutes later there would be nothing there to suggest anything out of the ordinary.

Unless you knew how to read a rivulet of vodka in the gravel. 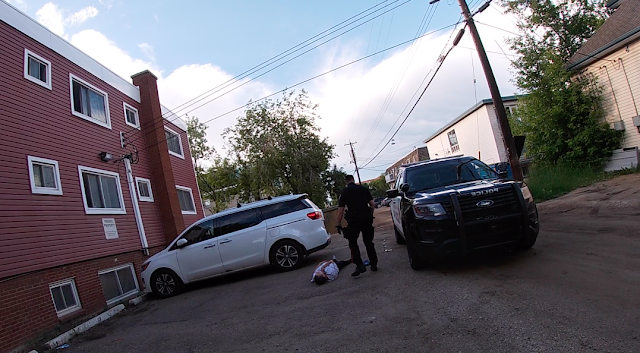