The University of Alberta President, David Turpin, stood on stage at convocation ceremonies and asked the graduates seated before him to look back.

"Your parents, your siblings, your grandparents, your spouses, your children, your friends, let's turn around and say thank you," Turpin said.

Under Turpin's baton, a couple hundred gowned students rose in a wave from their floor seats in the Jubilee Auditorium, their mortarboards bobbing, their academic hoods, red for Law, white for Arts, shining. They cheered and clapped and received back hoots and hollers and hellos from the balconies.

It was something to behold from our seats in row C of the first balcony.

It is something again to behold from the stage.

For a couple of years I sat on Alumni Council. Among the thanks for the early morning meetings on campus was the chance to represent alumni on stage during convocation.  It wasn't much of a chance, actually. It was a privilege to sit gowned up with the other medieval figures from Hogwart and consider whatsoever things are true. And to listen over a couple of hours to each name in the columns of grads called out to kind applause. I sat on stage in while Olympian Clara Hughes taught us that winning acquires the mantle of excellence when it occurs the spirit of gift.

"It means sharing, it means connecting, mindfulness, being present for somebody when you see them struggling," said Hughes, just a few feet away from me, close enough that I could hear her unmicrophoned voice. "That possibility is in each and every one of us us." 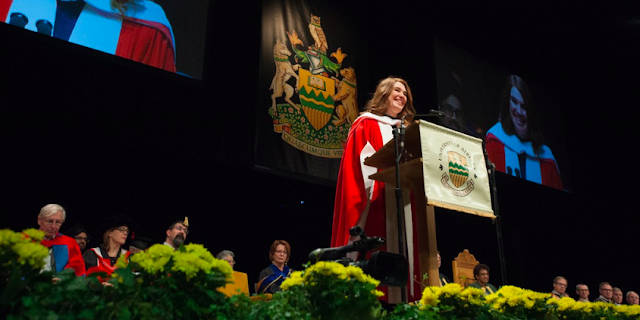 What struck me hardest sitting on stage and looking out at the crowd was the architecture of the event—how the grads sat on the main floor and then behind them and away sat two levels of their parents, siblings, grandparents, spouses, children, friends. And then how, if you imagined a bit, you could make out another level, even higher above and away, of the ones we have lost, those in Turpin's list of academic supporters now dead, but who, as always happens when gratitude is invoked, are welcomed back and find their seats.

Crushingly vivid and beautiful from the staged was the sight of this receding archeology.

Last Thursday, these things rushed back as I stood in row C, first balcony, seat 161, and waved to Alex below. And to his great-grandfather who he was named for, who fled war in Europe and arrived in Edmonton in 1928, who would drive us kids in his 1965 Ford Custom along 89 Avenue through the University of Alberta campus. 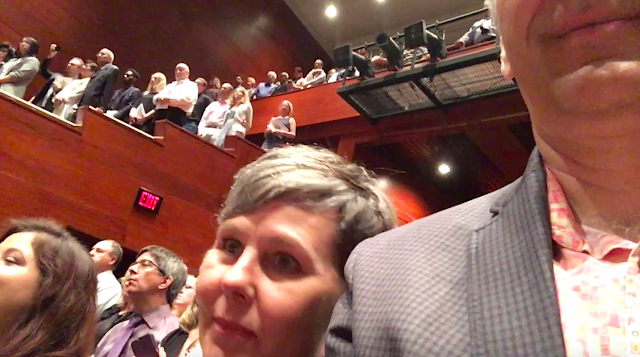