Do the crosswalk of life 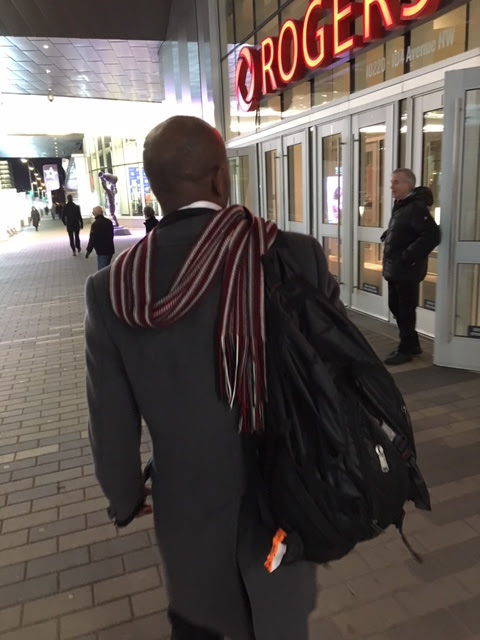 Let's quickly rewind how I somehow managed today to kind of get invited to Ethiopia.

I am just back from Rogers Place in downtown Edmonton. I walked there with Averra to make sure he got to the proper entrance. He works housekeeping at the arena. He has been in Canada for just a few weeks. He wasn't sure where to go. This might have been his first day on the job.

We got to the staff check-in after some good directions from a friendly face at the arena information desk.

On the way to the arena we had talked about the weather. It's a windy evening in downtown Edmonton. Minus seven. But it feels colder. He said he was from Ethiopia and had come to Canada to join his wife. I said I don't know much about Ethiopia, but I know Addis is the capital.

He told me the city has four million people, is inexpensive, has great food and, then, laughing, that it's always summer there.

Averra and I had started our walk together a few blocks east of Rogers Place, at the crosswalk outside the Sutton Place Hotel after my work day was over.

"Rogers Place?" he said to me as we stood together.

I pointed directions. Then I said: "Let's go. Let's walk together. I'll show you."


I happened to be at that crosswalk with Averra at that moment to get a photo of Edmonton Tower. Inside the Tower, a few hours earlier, I had stood at the Edmonton Transit Lost & Found counter while Girma thanked kind workers there for tracking down his lost—now found—backpack and for making arrangements for him to pick it up the next day. Girma had left it behind on an LRT train that morning. The train had gone out of service and back to the garage after unloading at Clareview Station. With Girma's backpack inside.


Brian and Mary and Barb at the Lost & Found scrambled when they heard that inside the backpack were immigration documents. (Girma had been on his way from the north end to Canada Place for an appointment, he said.) Standard procedure is that left-behind transit items make their way downtown starting the next day. But Brian and Mary and Barb could tell Girma needed peace of mind right then as much as the actual backpack. Was it safe? Barb was calling to find out. After a few minutes on the phone explaining the situation to a colleague at the garage, she flashed a thumbs-up sign. Everyone smiled. A small cheer went up.

Girma had told me his name and his predicament as we walked together into Edmonton Tower on the way to the Lost & Found.  English is not my first language, he said. It's the only one I know, I said. We laughed. He said has been in Canada for a few months. From Ethiopia. ADDis, I said. He smiled. Our paths had crossed five minutes before as we stood together at the crosswalk outside the Sutton Place Hotel. While we waited for the crosswalk light to change, he showed me a scrap of paper on which some kind soul had written in ink the address of the ETS Lost & Found. He was now trying to translate those numbers into an actual place. It's in Edmonton Tower, I said, pointing. We headed there together.

He might have asked me for directions because we had nodded and smiled at each other while waiting at the curb for the walk light. Girma had just called back to safety a stranger who by reflex started following a pedestrian who had ignored the stop hand and run across the road, avoiding the perpendicular trajectory of the cars.

"Come back!" he yelled to the stranger. She stepped back to safety.

The urgent tone of his voice had snapped me out of my thoughts. I was happy. I was happy because in my pocket was my new Canadian passport. I was at the crosswalk outside the Sutton Place Hotel at the end of a walk back to work after picking up the snappy document. It was full of empty pages where the tattoos of our adventures will be inked. It has a gold crest on the front. And a new serious looking picture of me inside. I even managed to get my signature right.


I was thinking these things as I stood at the crosswalk outside the Sutton Place Hotel. And thinking of my grandfather, dead now for many years. He loved this country. Next year will mark the 90th anniversary of his arrival in Edmonton by train from Halifax after ship from Copenhagen after I don't know via what from what is now Belarus but was then Poland. I was thinking these thoughts as a man who would later introduce himself to me as Girma from Ethiopia held up a piece of paper and asked for directions.

It was Averra at Rogers Place who said, as we parted ways, that I should one day visit Ethiopia.

"You are invited to Addis!" he said. We shook gloved hands.