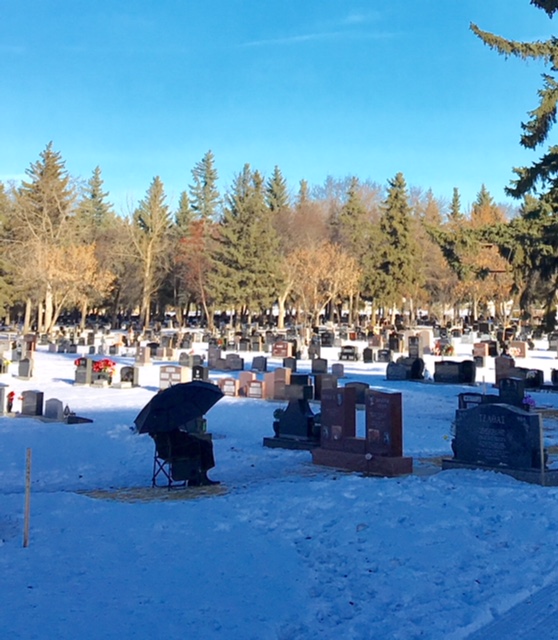 I stopped to record this fragile scene yesterday. Motionless, protected from the December sun by a giant black umbrella, a figure wearing black boots sat pointed at a gravestone in the snow.

The poise and publicness of this silent communication were remarkable. Out of the frame, automobile traffic streamed by this ritual response to an unimaginable event.

What is happening? Are memories being replayed? Answers sought? The news of the day shared? A promise kept?

And what is happening as I stare at the image, itself a recording of time vanished into the dark?

Today, I pedalled back to Westlawn Memrorial Gardens and added my prints to those that led to and from the marker. 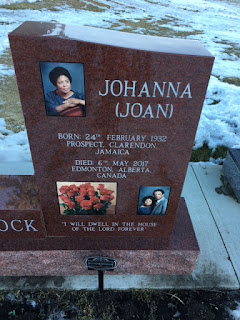 One person, Johanna Hancock, is buried here. Johanna Hancock was born in Prospect, Clarendon, Jamaica in 1932. The gravestone is inscribed with the final line from Psalm 23: I will dwell in the house of the Lord forever.

According to an online obituary, Joan Miller leaned into the world. At age 24, she left her island for England, where she was accredited as a nurse. She became a midwife in 1961, the same year she married Neville Hancock. The pair had met four years earlier. Neville had been dispatched to England to study mechanical engineering by the government of St. Kitts. Husband and wife went back to St. Kitts and in 1977 turned their aim to Edmonton, where Joan Hancock worked as a nursing supervisor at University of Alberta Hospital. She added a couple of health services administration degrees to her name and she opened a health care services company. In 2008 she retired. She died in May of this year.

Johanna Hancock (neé Miller) was survived by her husband, Neville.

When the time arrives, he will be buried next to her.

His half of the tombstone alters the pronoun of that last line of Psalm 23: We, it reads, will dwell together in the house of the Lord forever. 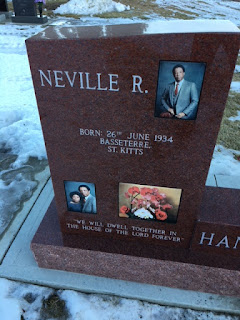 Yea, though I walk through the valley of the shadow of death, I will fear no evil: for thou are with me; thy rod and thy staff they comfort me.