I put the question out to the #yegbike Facebook community because the politicians have bicycle commuters in a vulnerable position. That is, talking about grand visions for the future of urban cycling infrastructure that somehow manage to spill conveniently into the term of the next city council. While we work and wait for that future not to arrive, what are the small things that can be done to make a difference for those who ride bicycles in Edmonton now?

My contribution to the list is the humble pothole. More specifically, the dangerous despothole.

The despothole is a curbside depression or hollow in a road surface caused by wear or subsidence that removes the sense of agency from commuter cyclists whose limited alternatives, as they approach a despothole, are to stop suddenly, hit the curb, hit the hole, or swerve left and move closer to passing automobile traffic. Like a despot, the despothole exercises unnatural control over the actions of others. :)

This is a despothole on 100 Ave. in Edmonton: 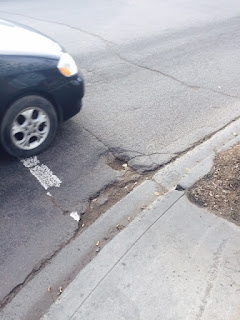 And this is a despothole on 100 Ave. in Edmonton:. 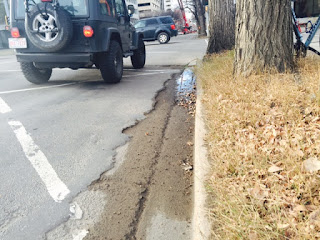 And this is a despothole on 100 Ave. in Edmonton: 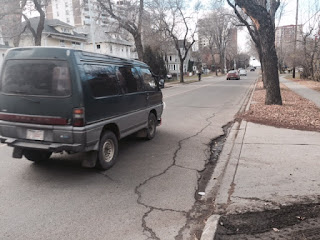 And then I stopped stopping to take pictures of despotholes on 100 Ave.

Bicycle commuters are well acquainted with the curbspace where the despothole rules. Unlike the major portion of the roadway, the curb and the gutter feature, depending on the time of year, ice and sand and leaves and other debris. They all make for tricky decision making on a thin margin of safety. Potholes near the curbs—despotholes—add to the adventure.

Like curbsquatting automobiles—cars and trucks deposited illegally by their owners in contravention of a location's timed parking rules—despotholes can force the moving cyclist closer to the stream of motorized traffic. While that may unnerve some behind steering wheels, it could undo some behind handlebars.

This is as good as a despothole encounter turns out. And this is how it feels.

Ending the rule of the lowly despothole will not call forth the soaring rhetoric of those visionaries who dare to dream and lobby and argue for a city of Edmonton that lets its citizens move safely as they choose. It will never attract the attention of those who, rightly, have bigger game in mind. Because the future is much safer and more exciting than the present.

But, as a modest proposal, can we pave just a bit of the present to get us closer to that future?