Siri, asked I, what is the forecast for Edmonton? (I typically wait for Josh to answer the question on CTV, but, I was about to get on my bike, and needed to know. And the only entity at hand was designed in California.)

Siri came back with this: Some bad weather coming up between today and December 14, 2015...down to -14 degrees Celsius. 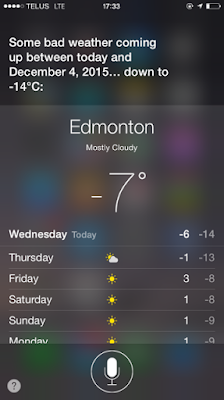 Being a child of the age of the fact-value distinction, I saw what Siri did there. I wanted a number, maybe some information about wind and snow, and what I got was a judgment. Not fair.

So, while in the meteorontological mood, I asked Siri another question: why do you say cold weather is bad? Siri was evasive, offering to search. Typical. 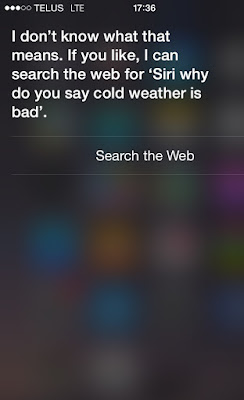 You don't think it's nice in Edmonton? I asked.

No, I don't think it's particularly nice in Toronto, Glenn, Siri countered, sounding my first name like an exasperated mother figure computer program bot whatever.

My point, I asked Siri next, was that when you say cold equals bad, and it's cold, we feel bad about our city.

But, but, Siri stammered.

No but! It's a real issue when you use the language of good and evil when you're talking about something beyond good and evil like the weather. The unNietzschean reply: I'm just trying to help you. 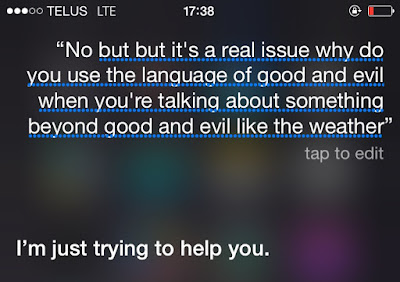 You're doing just the opposite. I said.

And then Siri's flight to subjectivity:

I suggested a flight north to check us out. You'll see that cold isn't automatically bad, I suggested. 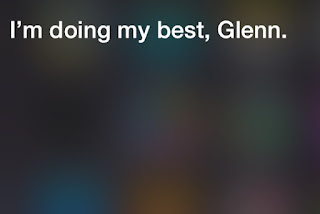 And I took that as a partial victory in the battle to get others, programmed or not, to see more clearly that we are remade out of the story we make of our winter weather.

I know we all have bigger fish to freeze, but this may change the conversation. For one thing, my iPhone battery now works better in the cold (not the bad) than it used to, proving that winter weather breeds innovation in both small screen and, I hope, the bigger picture.

Besides, Siri has some corporate connection to the Apple crew who masterfully reminded us that winter in Edmonton is, okay, in the language of good and evil, beautiful: 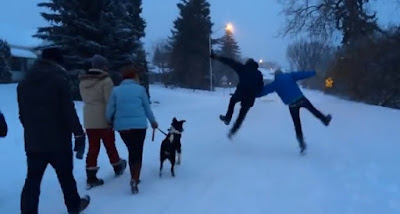