June 16, 2012
The hike isn't quite over until the following morning when the hips and quads and knees give their assessment of the work the day before.

Yesterday we drove up from Banff to Lake Louise, cutting off the main highway and taking the road less travelled by tractor trailers and RVs, the Bow Valley Parkway. Years ago, 25 or so, I think, I pedalled that route with Jaime and Mag on the way to their wedding in Jasper. It's a gorgeous route. The road makes you think. I don't know if I'm the person now I was then, but there are some things that haven't changed. I have never driven a motorhome in the Rockies. Okay, I've traded modes of transportation, and don't even have that Miyata 1000 anymore, but I still take pictures of the road ahead.

We tooled around the lake and the hotel for a while. We took some pictures. And more than once heard  ourselves saying that this was as beautiful as a postcard. Or this looks like a scene from a movie. It's curious. I wonder why we do that. Why when we are searching for the words to do justice to these majestic scenes do we fit them into the smaller, manmade frames of card and screen? That is something worth thinking about. And the recording of the scene, the incessant recording. All the phones and digital cameras and video cameras doing the work of preserving the moment, even before it is experienced in real time. In the presence of such beauty it is so obvious that time is taking it away.


We started walking around the lake, but then heard the call of the path that took us off to the right and up and up, through the terrific air and its fir scents, through the snow, and up and up. The sounds of waterfalls were matched only by the sounds of nothing as we stopped and looked down. 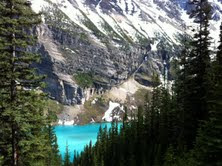 It doesn't look real, we would say. So still. There's all kinds of movement we can't sense, Michael says. Indeed.

And then real work up and up some more, meeting hikers on their way down, saying hello and listening for clues about where in the world they were from. Everybody with cameras. Thrilled with the view on this road less travelled, but sensing the real lesson was in the cup of Earl Grey tea at the top of the climb, in the wisp of steam rising up, up.