June 14, 2012
If you look closely down the path in this photo, you will see the runner that  I would like to be but I am not. Way in the distance, that little speck? That's the woman who caught me, passed me and then left me to consider the meaning of it all.

But I also run because thoughts drop in when I am in motion. There is probably some ancient basis for this. I remember from somewhere that Aristotle was known as a peripatetic lecturer, because he walked or moved around as he spoke. It's an attractive lesson, that somehow a body in motion is linked to a mind in motion.

When I run I try to put in action my thoughts about running. For those who read the blog, you know that I am wrestling with what my real goal is in training for a half marathon in California in November. And that I am trying to acquire the knowledge that will keep injury away.

In short, I am trying to come to real understanding of how to run, physically and mentally. 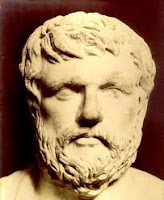 About 6 km into that 10 km run yesterday, this is the thought that dropped in and ran alongside me for a while. In life we have adversaries, opponents, obstacles. In a real way, they define us just as surely as the principles we purport to strive for. There is a fragment of Xenophon that returns at this point: know your enemy! It is very easy, too easy, at times, to identify your outside enemies, because, well, they are just so easy to identify. There they are, blocking your way, in obese, living colour. You hear them lie. You see them lie. They openly try to confound you, spread rumour, and it's all so easy and painful to see. Much harder, though, is to identify the enemy within. This suggestion that we are divided beings, that there could be an enemy within, or that we are some version of a civil war certainly goes against the beautiful desire for unity. And it's just plain hard to admit that we make mistakes, and, likely, the same mistakes that others make, and that these mistakes may issue from being, in a way, blind.

When my fellow (and superior) runner passed me yesterday, one of my enemies presented itself. Just for a second, there was the urge to pick up my pace and try to keep up. Is that competitiveness? Or is it what used to be called pride? I am not sure, but I do know that if I had been spurred on by it, I would have surely injured myself and been feeling more than the wobbly hips I feel this morning.

And, so, as my fellow jogger moved by and then moved out of sight, I let go the runner I am not.