Midway To A New City


We're in the middle of that quintessentially Edmonton event. No, not a summer festival or an Eskimos game. Not a run through the river valley or a debate over who has the right of way in a traffic circle. Not a stroll down the aisles of a farmer's market or a joke about how many Stanley Cups Calgary doesn't have. Yes, once again, we are trying to come up with a name for this city's summer fair.

It seems that Capital Ex doesn't work, because, well,  nobody knows what it means. It has remained more of a question than an answer.  I think it was the Edmonton Journal's Paula Simons who greeted the-then new name this way: Capital Ex? Capital Why?! That was equally parts clever and prophetic. Now, it seems, Northlands agrees, and there is a contest under way to re-name the summer fair. For those who don't remember, Capital Ex replaced Klondike Days, which, we were told, was showing its age. Of course, there were other problems with Klondike Days. Nobody like dressing up in 19th century finery. Nobody really saw the romance of wanting to play prospector, especially compared to the fun and freedom of being a wannabe wrangler. (Storyline advantage: Calgary Stampede. Fashion Advantage: Calgary Stampede).  And Klondike Days  just seemed too quaint. Every time we turned around someone was exhorting us to think world-class, be world-class. Klondike Days seemed backwards looking. Besides, there was always the debate over how much a role Edmonton truly played in the gold rush. Of today's black gold rush, there is no doubt, but all that North To Alaska stuff, were we big players?

Calgary complicates the issue, of course. Calgary didn't change horses in midstream, celebrating, this year, the 100th anniversary of the Calgary Stampede. It is an international draw. Corporate Calgary goes in whole hog. Garth Brooks performs there, not a Garth Brooks imitator.

What is Edmonton's identity, and what can be best sold to the world? Perhaps we could just be honest about our search for a corporate identity, and call it the Latest Name For The Summer Fair Fair. How about a return to Klondike Days, albeit with a modern facelift? Sandblast some of the grit away. My friend Graham Neil has suggested only half jokingly that if we really wanted to play to our past, we would call the fair Gretzky Days. Each year a Gretzky family member would lead the parade, and we would talk about who great things were here in the 1980s, how #99 put us on the map and how Calgary sucks because Tim Hunter couldn't beat Semenko, etc. Or Semenko Days. Or, as my neighbour, Craig, suggested just now: Glory Days.

What makes the question thorny is the subtext that would have us believe that the new name for the summer fair somehow has to encapsulate Edmonton's personality, its story, especially for those who have heard only of our winter. And Gretzky. The counterargument, which does not issue from Northlands, flows the other way: Edmonton doesn't have just one story. Edmonton has changed a lot since the days when the summer fair spoke for the city. We are a city for all seasons, and our festivals reflect that. Both points of view have force.

I am far  from an expert in how to brand a summer fair in the year 2012. But I sense it's the wrong to pretend it's Mad Men's 1964,  and that all we have to do to bring everyone into the market is come up with the right tagline. We're all in on it now, so that kind of pitch probably doesn't work anymore.

And I sense it's somehow right to let Calgary have its cattlenalia. I sense their tribute to livestock, home on the range, the cowboy spirit can find a counterpart in a fair here that celebrates cultures and neighbourhoods and ethnicities and food. And people.

Isn't Edmonton's future, its message to the world an expanded Heritage Festival? Except that instead of, or in addition to going to Hawrelak Park, you went to actual neighbourhoods in Edmonton and danced in actual streets and ate in actual restaurants and played actual sports. Of course, there would still be a midway in the north end, but west, east and south would get in on the party. 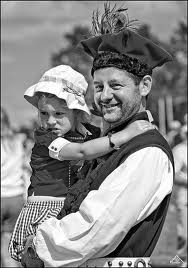