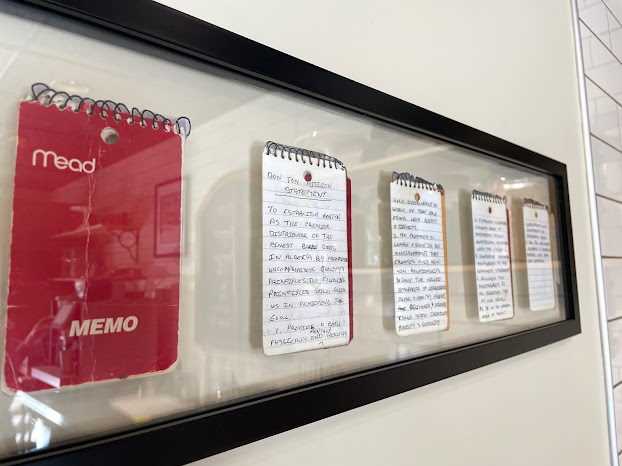 Seriously. Happy end of the week, friends. Here's this week's Three Things podcast where I try to notice, without the help of an algorithm, three things that made me happy or grateful from my little life in Edmonton.
1. Bon Ton mots
The next time you’re in the neighbourhood, at Bon Ton on 149th Street deciding between the poppy seed danishes and the blueberry danishes, take a look behind the display case, up over to the right. There, hanging in a frame under glass on the wall are pages from a red notebook. Its cover is bent and creased down the middle. The coils are twisted. It had been in Hilton’s pocket, by the look of it.
Hilton had owned the bakery. He died last year. The notebook pages contain the mission statement for Bon Ton, in Hilton’s hand, in black ink. It’s obvious from the way the pages are preserved that the bakery believes that the ink flowed from his heart. 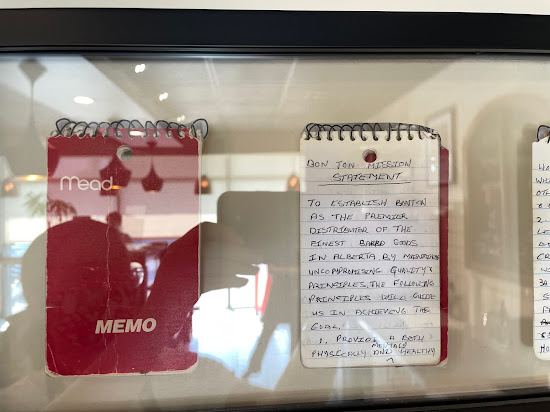 “To establish Bon Ton as the premier distributor of the finest baked goods in Alberta”, he writes, “seven principles will be followed.” The first has little to do with baking. “Provide,” he writes, “a both physically and mentally healthy work environment in which we treat each other with respect and dignity.”
It was always fun to see Hilton himself behind the counter, and hear his bass voice. It’s still dramatic that his words are there, not computer-printed, but hand-printed, finger-printed. And it’s good to know that with the poppy seeds and the blueberries, Hilton wanted other kinds of ingredients to be baked in.
2. End times sign
We drove by the now empty site of the old Petroleum Club on 111th Avenue, and I laughed out loud, spontaneous like, as I read the big sign that stood there. It’s the kind of sign land owners put up to tell passing traffic what’s being built there next, what exciting structure will take shape. 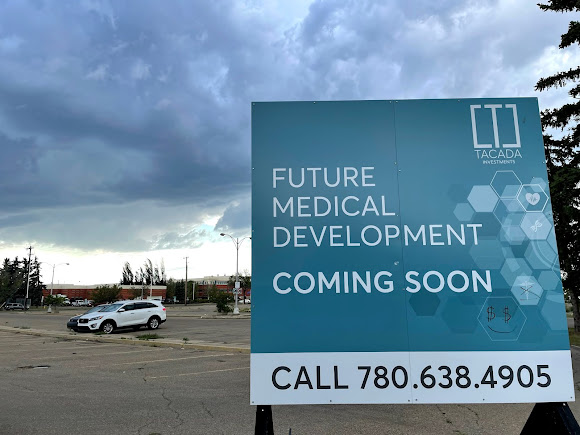 “Future Medical Development Coming Soon,” the sign said. Makes sense, in the small picture, and kind of expected. But in the big picture, it’s sign of signs, isn’t it? A stark and unexpected in-your-face reminder that time goes by too fast, and, yes, whether we like it or not, a future medical development is coming soon to each of us.
I seem to react physically to these unexpected little episodes where words do their mischief. Somewhere down there [points to chest] the intended meaning of the word maker collides with unintended meanings, and, before I can refine the energy into words, it leaves the body as sound. That’s what laughter is sometimes, right?—energy that the body cannot use, forced up the windpipe and out the mouth in a mix of carbon dioxide and water vapour. Like flaring on refinery row. Or, as Auntie Shelagh says, say it, don’t spray it, man. 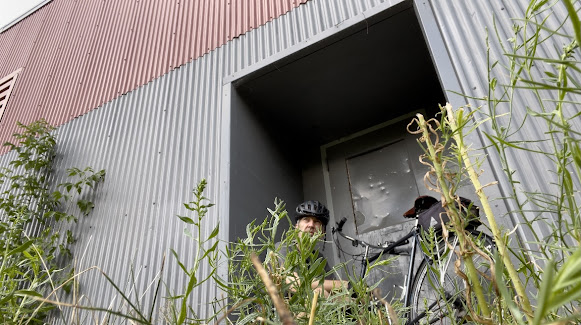 3. Writing out the storm
In a second, everything changed. The temperature dropped. The sky darkened. The rain fell.  I was on my bike on the shared use path near Westmount, still 20 minutes from home. No foresight, no raincoat. I looked across the field and saw shelter from the storm—a doorway at the back of an old  factory. I ducked inside that doorway, thunder crashing. My phone quickly died. I had no book or magazine. I was left to my own devices. It was a kind of forced media fast. There was nothing to do but watch the rain and form sentences in my head. Rain drops exploded like shells on the pavement. The tall grass caught the rain and released it in droplets, like a syringe. After 10 minutes, the complexion overhead cleared. People reappeared on the path. Under umbrellas. They reminded me of the mushrooms that pop up on the front lawn after a rare day of rain. I left my perch and pedalled home, hitting the new puddles, glancing back to see the kind of signature the wet tires left behind.
Here's hoping we all have containers to keep out of reach of the world and the storms it sends. 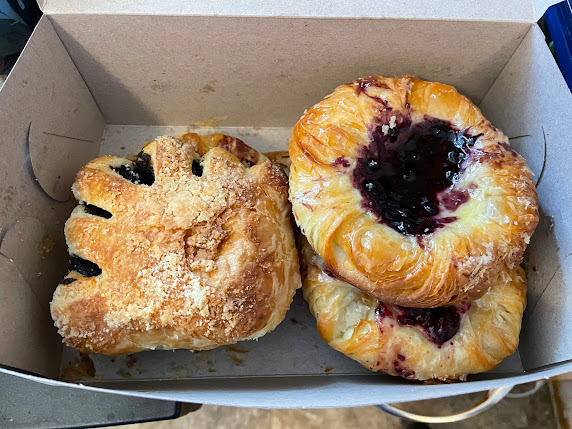