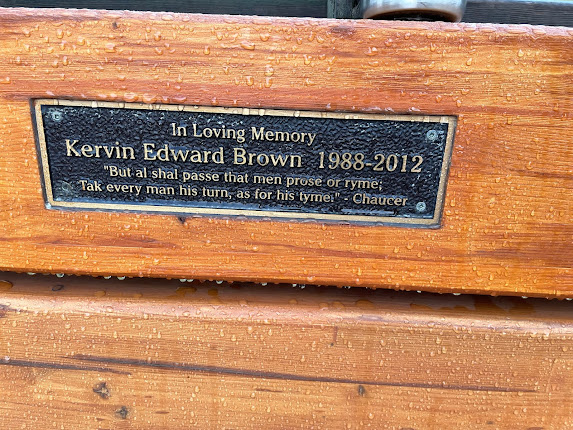 Here is this week's Three Things podcast. The podcast is my experiment in trying to notice what I notice, and not what is noticed for me by the algorithm.
1. Life and Death Valley
In the MacKinnon Ravine park, between the trailhead at 149th Street and the Groat Bridge, there are, by my count, 17 wooden benches embedded with memorial plaques. “In memory of Darlene James. Be present. Cherish the moment,” one says. The children of Lorna A. Flett quoted Yeats and said their mom “enjoyed poetry, nature and the peace of this river valley.” “In loving memory of Mar Walker 1923-2004 who watched the seasons change along this path for over 40 years.”  I do the math on another plaque and exhale as I realize Baby Xavier Grey Thompson would now be going into Grade 2.  Bill Osadchuk was “a true gentleman who loved running in this river valley.” Kayleigh Butler was 27 years old when she died. Josef Lapes co-founded Pemco Construction Limited. On the plaque of  Kervin Edward Brown 1988-2012 something unexpected, a couplet from 600 years ago, from Chaucer:

But al shal passe that men prose or ryme/
Tak every man his turn, as for his tyme

There is another MacKinnon Ravine plaque cast in my mind: On August 29, 1974, by a vote of 6-5, City Council stopped a plan to pave the ravine and turn it into a freeway, preserving it, instead, as a place to meet the dead, talk to trees (I say hello to the trees above every time I pass by), watch a log float down the river—and, today, on this cool August morning where the sun in the fog looks like a thin silver coin slug—a place to feel quietly alive.
2. Spelling matters
There was a little thing on social media last week that made me catch myself, and wonder was it a mistake done on purpose, do people do those things, am I getting conspiratorial?  It was a pic of a Conservative Party door hanger printed with basic campaign promises, the kind of campaign material that typically goes right into recycling. This door hanger got roughed up on Twitter because it was full of spelling mistakes. Action in Action Plan was Acton, spelled without an i. Ottawa was spelled with one t. People shared the pic and challenged each other to find all the errors. Six? Seven? More? The grammar was bad, too. And the colour saturation of the leader’s face was off, to boot.
I started making my own list of mistakes, and then saw myself making my own list, and said, whoa, what am I doing? I never read door hangers this carefully. Am I being played? Have I been tricked, have I tricked myself into spending way more time than I ever would looking at the name of the party (it wasn’t misspelled), the main platform planks (they weren’t misspelled) and the face of the leader because I won a spelling bee in Grade 3 after nailing the word "because?" (True story. Miss Gangl was our teacher.)
I did a quick search to learn how the brain sees words as wholes and not letter by letter, and how it corrects misspellings as it goes, even if that means unknowingly slowing down by 11 percent the speed at which it reads. Who knows where the truth lies, or how?  At the very least, it’s a reminder to notice what gets me noticing, and how liberal I am in spending my attention.
3. Venn diagrams
I collect real life stranger Venn diagrams. Snippets from lives as they briefly overlap mine out there.  I pedal up the hill up to Faraone Park and pass a woman taking a video selfie as she narrates “I can’t believe I get to live in a place as beautiful as this.” And then we come apart. A man on a bench in Railtown says “and that’s the whole thing about capitalism” to the woman sitting next to him. Sometimes it’s funny:  “He can cheat on me but not when I’m still in the hospital” a woman laughs walking with friends in Glenora. Or the voice of trial: “I’m on a waiting list.”  There are fragments:  “..made his nose bigger” dot dot dot as I pass two people on Keillor Road.

There are Venn diagram lessons, too, like the one I pedalled into down the hill from Redbike. I rang my bell. The trio in front of me, in my lane, didn’t seem to hear. Are they deaf, I wondered, without complete charity.  I got closer and noticed, yes,  they were signing to each other. They saw me. I tried to say hello with the salute-from-the-forehead sign, but am pretty sure I botched it by going thumbs up. I forgot if goodbye was a wave or closing my right hand, once? twice? I pedalled out of our common area and back into my set feeling kind of jolted, resolving to do a better job making room in me for others before our worlds next come together.
Have a good week end, and a good week beginning.