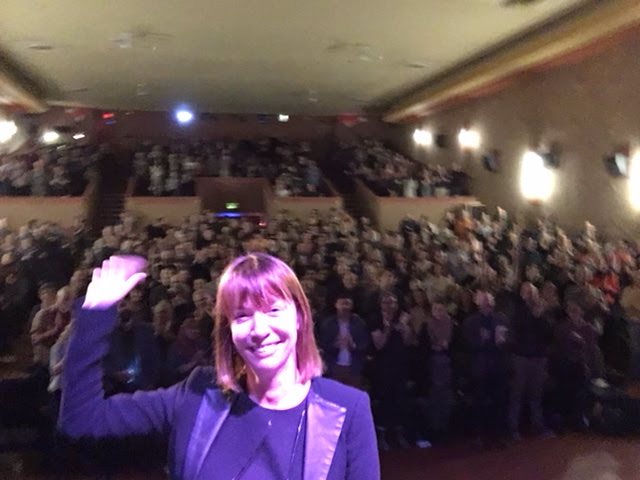 Janette Sadik-Khan is a lawyer. She moves easily in engineering circles. She led the New York City Department of Transportation for six years. There is no necessary reason with that professional pedigree that she should also be able to speak clearly. Lawspeak plus engineeringspeak plus transportationspeak plus zoningspeak can be the deadliest of communication cocktails. Numbed by acronyms, baffled by gab, fogged by vaporous words, listeners are quickly anaesthetized while the elect work their schemes unbothered because un-understood.

Sadik-Khan spoke to crowds in Edmonton and Calgary last week. She spun yarns from her storied tenure at NYC DOT. Bike lanes. Bikeshare. Summer Streets. Plazas. A new Times Square. Deck chairs. Paint. Bus rapid transit. A reinvigorated way of seeing public space for people. All the riveting stuff of her book Streetfight: Handbook For An Urban Revolution. Read it!


Part of Sadik-Khan's revolution is in language itself. In the book's preface, she recalls Mayor Michael Bloomberg whispering "Don't fuck it up!" after introducing her as transportation commissioner at a media conference in 2007. The salty language is attention-getting. We aren't accustomed to hearing elected leaders swear openly. We have been granted special access by the writer, and access, as every old newspaper reporter knows, is everything. But there is another kind of salt in the four-word Bloomberg imperative. This salt is the way that short sentences preserve themselves in the reader's memory. And Sadik-Khan can write short sentences. Here are a few of the many examples from the book, and some tentative thoughts about what makes them tick.

When you push the status quo, it pushes back, hard.

This aphorism from p. 5 is fuelled by the jamming together of unexpected elements. Status quo sounds so very inert. As seemingly lifeless as the Latin term the concept sits pickled in. We are used to fighting and battling the status quo, but here the status quo is personified as every bit the fighter as its dogged opponents. The repetition of the word push also helps make the short sentence memorable.


Drivers learned that the street was theirs and to stop for red lights instead of for people...

I found this gem on p. 65. It found me out is more like it. Those last four words startled me. Yes, as an automobile driver, I do forget that red lights serve a human purpose. I confess, I have been guilty of this. We tend to remember feeling guilty.


What happened to the traffic that used those two uptown lanes? The grid happened.

Question-and-answer, like this exhibit from p. 84, is a method of storytelling, and these two sentences are a classic story in miniature. Mike Long from Georgetown University teaches that the essence of a successful story is the movement from tension to release. And that the art of the storyteller is actually on the tension part of the ride. Too many would-be storytellers mistake their craft and rush to their ending, becoming boring information-conveyers in the process. Sadik-Khan doesn't fall for this. She carefully tells the story of closing two uptown lanes of traffic near Chelsea Market. The suspense builds. We wonder how automobile drivers responded. Were they livid? Did congestion worsen? Did Sadik-Khan and her band of revolutionary bureaucrats face an embarrassing retreat? Did they cave and re-open the lanes? The What happened...question completes the tension. Then the three-word answer hit me like the drop of a rollercoaster. The grid happened. That is, in boring paraphrase, NYC drivers found alternative channels to flow along in the system. What happened...the grid happened is tension and release in 14 words. Tension and release is how stories are made because tension and release is a way that human beings remember. Until writing and printing came along, this method of remembering was a valuable technology.

(The grid happened. Makes me think shit happens. A little more salt poured in the words!)

Sadik-Khan's fondness for using tricks from pre-literate days in her writing transfers to her live stage show.


Two days after we watched her in a packed the Garneau Theatre in Edmonton at an event hosted by Paths for People, I asked my wife what she remembered from Sadik-Khan's presentation.

She took a heartbeat to consider. "She said density is destiny," Shelagh said.* A short sentence with alliteration can work like a hook, even when listeners can't go back and read the short sentence again. The hook works precisely for that reason. When words uttered live vanish, as unprinted sound does, they need help to stick around inside an audience. Short sentences, with two of three words starting with "d," do help.

In the pic above, the author is saluting the clever sign of an opponent driven to pick up his or her permanent marker to campaign against bike lanes and other roadway modifications on tony Prospect Park West. Don't be conned by Sadik-Khan, it proclaims. She claimed to love it. You gotta appreciate creativity when you find it, she told the crowd.

You have a lot of asphalt! she said in front of an image of the downtown bicycle lanes. Laughter! Lesson: use it to make a true bike network that connects people to where—the libraries, rec facilities, parks, work—they want to safely go.


Here's a version of that meme about the space required to transport 60 people by car, updated to include Uber and autonomous vehicles, she said. Laughter, as the audience digested the sameness of the line of cars. Lesson: the streets of the future will be just like the streets of the present unless there is room made for people, cool technology or not.

The Citibike bikeshare program was in the very centre of the Venn diagram illustrating what annoyed New Yorkers. Whether you didn't like Bloomberg, environmental initiatives, sharing, health campaigns or things vaguely French, you didn't like Citibike. Laughter. Lesson: don't be so serious all the time.

What I remember: keep people in sight in your work, and in how your words work, too. 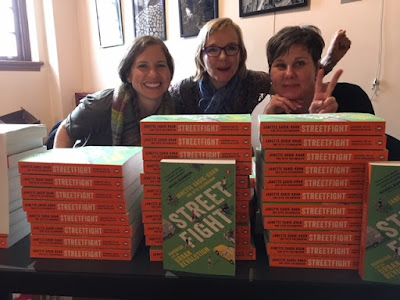 * An earlier version of this post incorrectly relayed the quote as "density was density." While this is inarguably and demonstrably true, it is precisely not what was said. :) Thanks for the catch, Sue.