Fragments from a fall 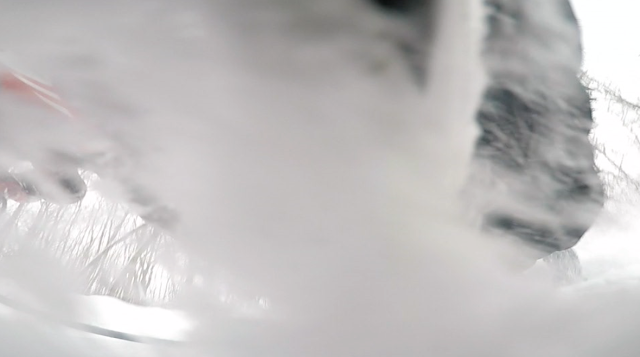 My left shoulder throbbed. From the hot pain rose the strangest image. A giant eagle had sunk its giant talons into my left shoulder, and then squeezed until I breathed out, barely controlled, a thin jet of frosty air. I had just fallen off my bike coming down a stretch of riverbank ice blanketed by morning snow. My front wheel slid. I lost control. I hit hard. I was on the ground, part of a debris field. My bike was on its side, its front wheel twisted backwards. The Go Pro handlebar mount was sheared off. The camera was half buried, still rolling. The tiny red light record indicator pulsed. The rear panniers were hanging by single hooks.  These are things I noticed when my shoulder was dislocated. It was so quiet, in the snow, in the trees, under the sky.

This is what it looked and sounded like from where I sat, and then didn't.

I was part of a perfectly lovely morning in the city. Jeff at Sugared & Spiced had opened the shop early for Coffee Outside. I talked to a bunch of good people, including Alan, Chris, Robert, Derek, Tara, Tyler, Steffen, Anna, Erin, Kelly, Karen, Varina, Dirk Lancer and The Doc. We talked about the things we have been talking about for more than three years of Friday mornings: bicycle commuting, coffee, the city, the City and the things we've learned about each other along the way. It's good to be with a group of people you don't get paid to be with. As I left, there was nothing to hint at the wreckage ahead. 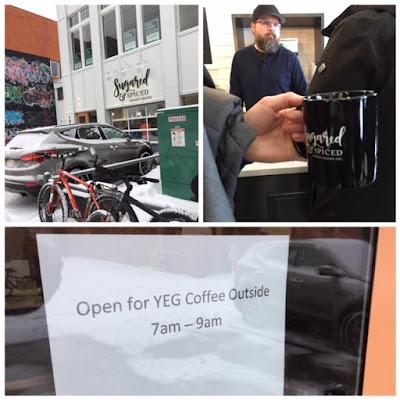 Were I listening carefully, the hints had already happened. Before setting out on that Good Friday morning, I had fired up Twitter and tempted the heavens by using some work-holiday-emergency-ward wordplay. Stat! 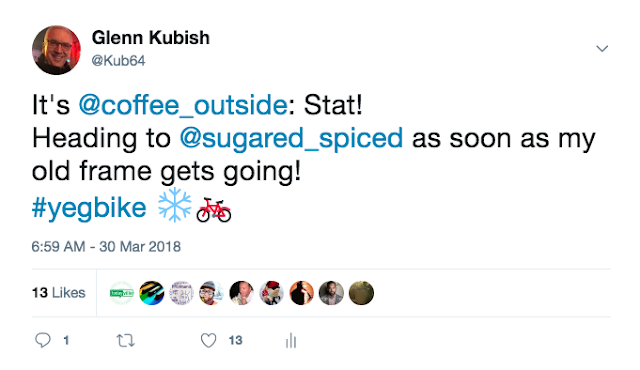 Then I told Shelagh I would ride there and back with The Doc. Note her explicit instruction to not hurt myself. 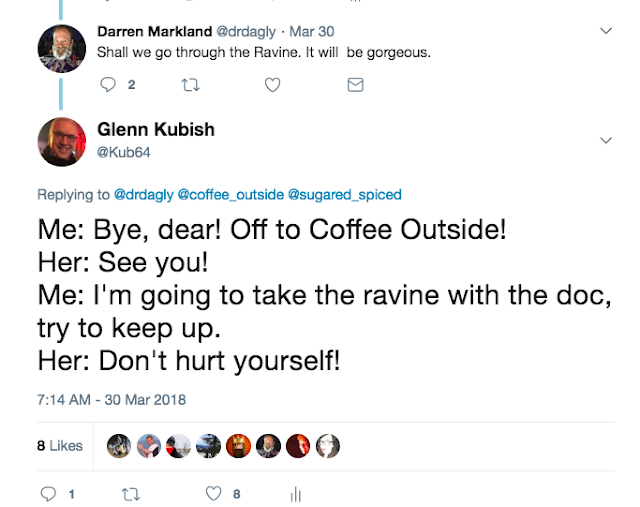 Just After The Fall

The Doc, who you saw taking the narrow path down through the trees in the video, having himself successfully taken the path less travelled for all of his life, walked back up to collect me and my bike. He refrained from reminding me we had both noticed ice near this spot on the ride up a couple of hours earlier. Or that ice doesn't melt in two hours when temperatures remain below zero. He is a kind man and a good friend. We walked to the it-looks-nearby Kinsmen Sports Centre. I was bent over, cradling my left arm with my right. It was like my whole body was in service to the injured part. I moaned. I swore. I sat down in the lobby. 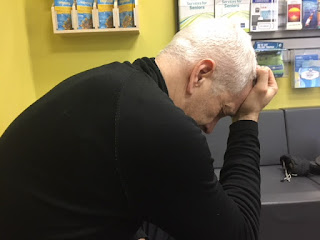 The Doc said dislocation. He shared some theory about pain and its function. It really made sense. You look like you're in agony, he said. That felt a strange kind of good. I was in agony. Fidelity between word and feeling. He said I looked like the Thinker. An employee at the front desk walked over and offered me a cup of water. That was so kind. 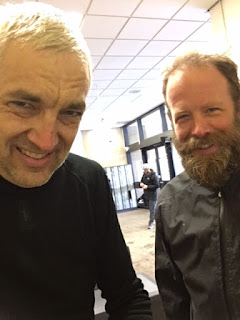 I had phoned Shelagh, careful to follow our bicycle riding emergency communication protocol by not burying the lead. I'm okay, I said. Okay, she said. The doc thinks I dislocated my shoulder, I said. I have to go to the hospital. Okay, where are you? She dropped the laundry and picked me up, driving gingerly over the sports centre speed bumps and across the bridge and up through downtown to the Royal Alexandra Hospital. We drove in silence. The seatbelt monitor beeped.

I remembered driving home years ago from Gibbons, a little town outside Edmonton. I was in Grade 8, maybe. I played guitar in a dance band. We were called The Good Friends. Organ, drums, guitar. Everything from Julida Polka to Una Paloma Blanca. Carol and Sandra and me trying to keep up. We played weddings and community parties and Knights of Columbus dos. People still said dos. That night we had played a rodeo dance. Our parents helped us set up and tear down. My dad was carrying a speaker stack on his shoulder when he slipped off the stage. I remember the red sparks that shot up like a crack from a bonfire when he, his Old Port cigarillo still between his teeth, hit the ground. Then he drove home in silence with a broken collarbone.

I walked into the emergency ward injured, and they took me in. I started to cry quietly. I had no choice. I felt a swoosh of emotion moving up like an elevator to my eyes. A nurse handed me a tissue. I sat on a bed in a room in which a lot of people moved and looked at equipment and asked me my birthday. Wires were attached to my chest. Everybody was so kind and gentle. A doctor explained they would first try to reset my shoulder with a little bit of drugs, if I could relax. I couldn't. I signed a document and then got oxygen and fentanyl and propofol and I saw the scene in front of me, the people, the equipment,  flicker up like a filmstrip. "Where is Shelagh?" I wondered after they had relocated my bones. She had sat just outside during the bodywork. The pros in that room were called away to a more serious case. I didn't catch their names, but thank you. 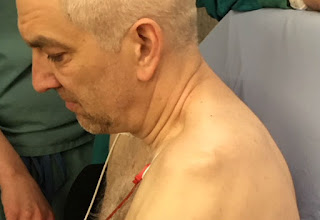 I met kindness in the X-Ray room and kindness in the CT Scan room. Gentle picture takers. After the scan they wheeled my stretcher into the hallway and I lay there waiting for a porter to take me back to the room where Shelagh was waiting. It struck me that I was a passenger train waiting on a siding. Freight trains—linked wheeled metal carts containing medical supplies—were hauled by. I tried to convey this railway metaphor to the porter when he arrived. Unsuccessfully.

I got back to my room and I was trending. 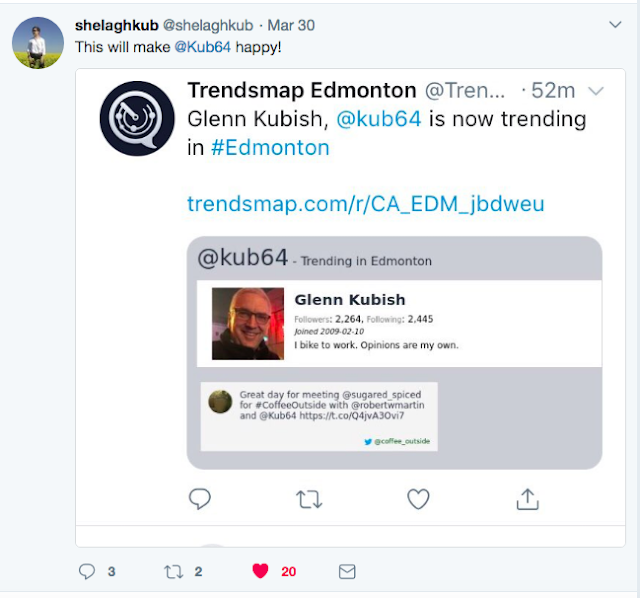 An hour or so earlier I had noticed my reflection in a hospital hallway mirror as I stared up from the stretcher. Shelagh cropped and posted it. These things are not in the vows. :) 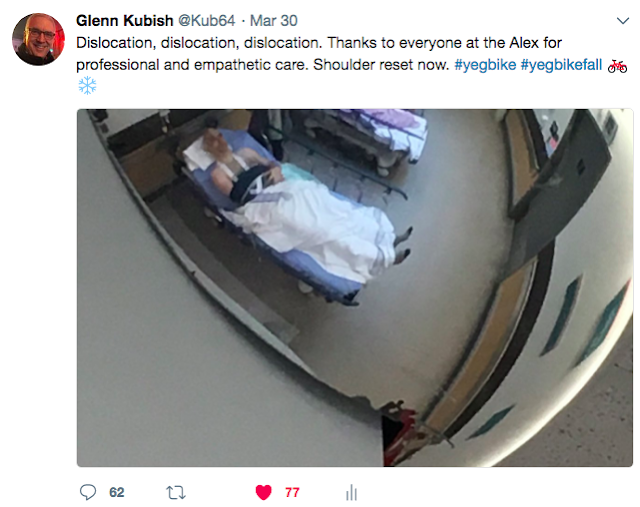 My friends were with me.

The doctor came back with good news: the bodywork had held. And bad news: The force of the dislocation had fractured the shoulder joint and done ligament damage.  Surgery might be necessary. I will find out in a couple of weeks. I tried my best to thank everyone. I thought about trying to make clear my gratitude by using my thank you-freight-train-car metaphor. "Thank you" is just a beat up looking freight car of a word but it is packed with love and gratitude. I thought better of trying to get that one out through the Percocet haze. But it's true. 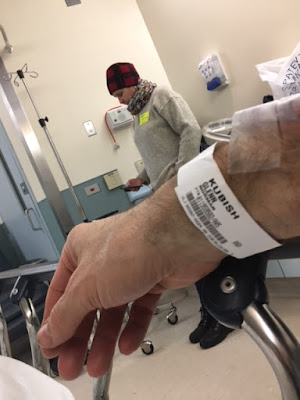 The fall put an end to my goal of riding a bicycle for 365 straight days, and taking a pic each day. I made it to Day 278. (My friends are sending me pics of their commutes to transform the streak into our streak! :) A week ago, on Day 274, I rode east over the Groat Road bridge into a bruise of a sunrise. Yellow, red, purple, blue. We don't start each day fresh. We start each day bruised. And we take care of the bruised.

A bright orange package poked out of the mailbox this morning. The green customs declaration declared: 1 Book, Gift. The return address was Oulu, Finland. Now, what is as thrilling as an unexpected package from afar? A package in the mail from afar reconstitutes distance, remakes the big world. It has moved through that big world. Yes, I then recalled, this is the kindness of my friend Timo. Timo, who is the president of Winter Cycling Federation, and I had been in a Twitter conversation a month ago with Anders, the chair of Canada Bikes, about the need to read a book by Mauri Myllylä. And here it was at precisely the time I needed it to be here. I used scissors and my teeth to open the package. It cheered me up, and pointed the way back. 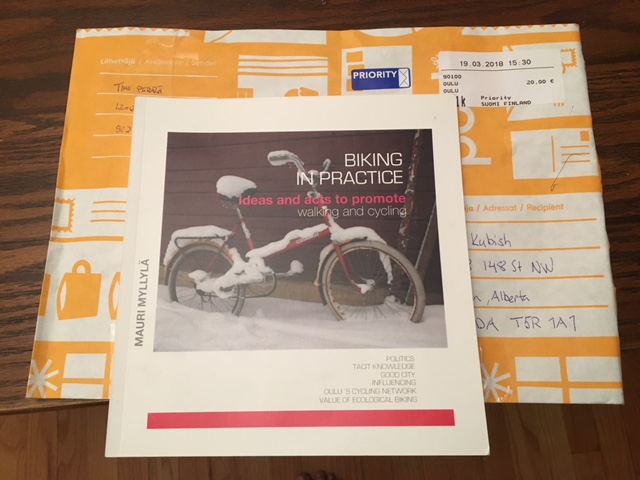