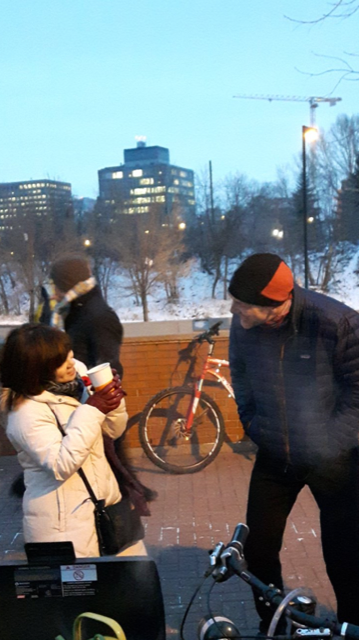 There must be imperceptible valleys of isolation between us.

Email has revealed this communication gap. You email me. I see it drop onto the top of the ladder of messages on my smartphone. I am content for now to know that your message has come in. I do not respond. You may feel slight anxiety with my delayed response to your call. I respond later. This is called asynchronous communication.

But it is all asynchronous communication, isn't it? The email version is just easy to see. Like the interval of white space between communication in the previous paragraph and It is at the start of this paragraph is easy to see. After I had hit the enter/return button.

Yesterday, Coffee Outside was marvellous. Most Fridays for almost three years now, summer or winter, for 10 minutes or two hours, a group of us bicycle riders in Edmonton have met in Faraone Park to drink and brew coffee and talk about the weather, the city, our travels, the media, bicycle components, issues of the day, works of charity. Word of our little klatch had somehow travelled across the miles to Sapporo because, yesterday, 11 city councillors from the Japanese city rolled up in a giant tour bus and joined us for Coffee Outside. It was the finale of their three-day trip to our city to trade information about living life in winter cities.

Centre stage was Darren's cargo bike. He has retrofitted it with a stove, cannisters, propane, tubes and water reservoir into a rolling coffee maker. We call him The Handlebarista. Our visitors circled the contraption and many photos were taken and smiles smiled.


Through a translator (Akiko from St. Albert), we talked about Coffee Outside—how we met on social media, how we do our best to not let winter unsocialize us, how we read our city and react as we ride through it. We learned that Sapporo is more than double Edmonton's size. It is more humid and has more snow and deals with more ice. It has excellent seafood. Yu Darvish played for the local Hokkaido Nippon-Ham Fighters and we agreed it was, for the LA Dodgers star, a forgettable Game 7 without a slider that slid.

For me there was a remarkable moment when Darren, through Akiko, was explaining why the cargo bike had a belt and not a chain. More efficient, no rust, less wear, etc. As medium, she took his explanations and delivered them to the Sapporo councillors who nodded their heads.

"And," I said, "Darren also uses the belt to keep his pants up!" Those in the group who spoke or knew English laughed. Akiko smiled and in a flash converted the joke to Japanese while we waited for a reaction from the larger group. After a couple of seconds they obliged with a good laugh, and then we all laughed again.

It felt different, it felt a touch lonely waiting to see if the joke made it across the divide. (Asynchronous...)

It felt great, it felt like something expanded and lightened inside me when it did.
(...communication.)

Too soon, our guests had to leave. We shook hands and bowed and tried out phrases in Japanese and waved goodbye. Suddenly, we were back to just us and the way Coffee Outside typically is, except for the wonderful encounter we had all just lived.


It's easy to recognize the space between us when we have to navigate across languages. And it is very proper to feel joy at getting across and back. It is thrilling. What a wonderful lesson.

What a wonderful reminder, too, of the truth of things. We are each radically alone. The electric speed with which we communicate verbally—the speed with which Shelagh, just now looking forlornly into the fridge, made clear to me her astonishment that, "what, we don't have lemons?!"—hides the gap. We can't measure chasms that small. But they are so there. Language proves it.

I think if we know we're alone, if we face that primary fact, then the moments of daily and even mundane togetherness can reacquire the valence of wonder they should never lose.

Thank you, friends from Sapporo, for bringing this lesson home.