Scenes from Saturday in Edmonton 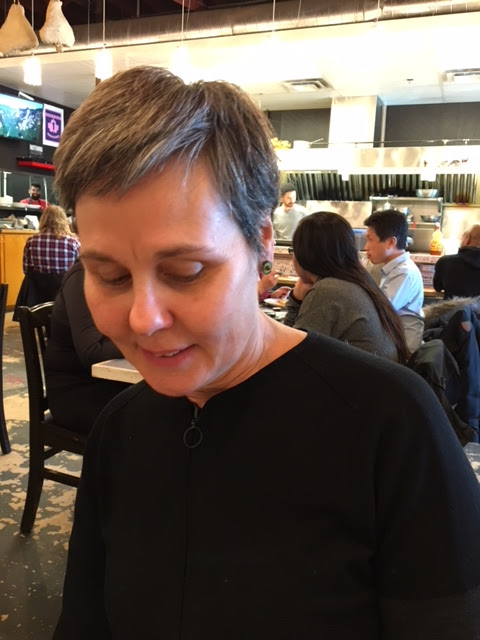 "Are those AVOCADO earrings?!" the server asked Shelagh.

"Yes, they are," she replied with a bit of a head tilt to the right.

We were sitting for lunch at the Local Omnivore. I was a quarter way through a double burger so good I later walked up to the guys in the kitchen to say thank you. 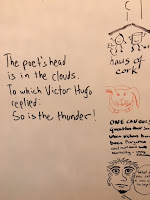 The main wall at the restaurant is for writing on. I took a fat felt marker from the next-door table and, with squeaky ups and downs and crosses and loops, printed this: The poet's head is in the clouds. To which Victor Hugo replied: So is the thunder! I read that in the McLuhan biography I am close to finishing. Our server smiled when she read the words. She told us she plays violin. There is a Victor Hugo quotation in her studio at the University of Alberta. She read Hunchback of Notre Dame as a girl. Her father helped her.

I started the day at Hap's. It was Fitz's turn to buy breakfast for Spell and me. I ordered an omelette with the works. We said hello to the City Manager who was there, too.

"I'm making a beef burgundy and I need a cheap pinot noir," Shelagh said as we walked into the Wine Gallery. "Not cheap, Peter. You know what I mean. 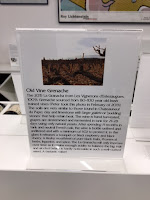 Peter walked into his collection and retrieved a bottle of Sibaris Gran Reserva from Chile. 19 bucks.

We met Peter when he used to work at Crestwood Wines. He would help me match wines to the regions in France, Italy and Spain the grand tour peloton were racing through. We followed him to his new shop.

I was in another part of the store reading the story on a piece of posterboard of the 2015 La Grancha from Les Vignerons d'Estezaugues. "The soils are very similar to those found in Chateauneuf du Pape; clay and limestone with large galets or pudding stones that help retain heat."

"Hey, Mike!" I said with a wave as we walked into the IGA. He waved back.

Mike manages the grocery store. He is from Prince Edward Island. He was standing talking to a customer in front of the lobster tank. I thought to myself he's back where he started, in the Maritimes.

At Redbike, Cliff and Jay were at the front desk just like I pictured they would be. I said my Brompton is the best way to meet strangers. They point at it, ask where the other half of it is, wonder how it folds up. Take it for a ride, I always say. A lot of them do. Some of them leave me a bit nervous. Are they coming back? Cliff told the story of how a surly U.S. border guard dissolved into a nostalgic boy after Cliff informed him the reason for his trip was to attend a Schwinn conference in Seattle. The border guard had a Schwinn as a boy. It was red.

These are some of the local places we enjoy going to and the people we enjoy supporting. Because they localize the wine, the lobsters, the coffee, the Brompton and the avocados.