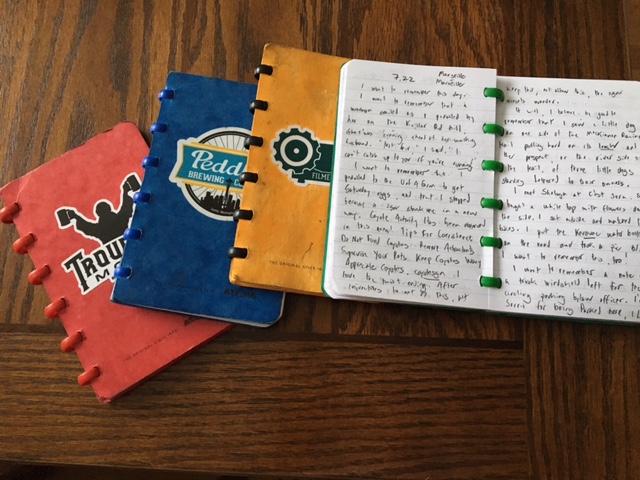 For a reason that I trust will reveal itself as time rolls along, and despite that article of faith proving how poor a researcher I am (I mean, when has data collection by itself magically suggested a theory, instead of the other way around?), I am almost nine months into a writing project that took an interesting turn yesterday.

Starting back on Halloween last year, I have witnessed in word and photograph the sights and thoughts that strike me every day I ride my bike. I am into my fourth booklet of souvenirs. I have been uncharacteristically disciplined about taking pics and reviewing video and pencilling my observations from the saddle. The entries are little tombstones of the days.

From 11.29: A joy of riding a bicycle in the city is actually touching the city as I ride. I reach out to touch the overhanging spruce boughs. I let them scrape my helmet hello. I like to run my gloved hand along the bridge railing, especially when there is a film of snow to wake up. I like to read the smudged message that others before me did the same. I brush the top of a hedge as I go by. 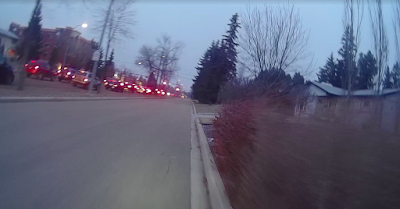 From 7:13: This morning on the way downtown I stopped outside Oliver School. The field is empty now, it is July and the holiday is under way, but the ghosts are there. I stopped to look at the cubby hole cut into the chain link fence. Those empty squares were portals into a miniature world of giants. 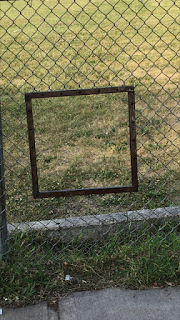 And so on, and so in. I try not to force it. All the counts is what happens to get my attention and take it somewhere. I hope, when the counting is done, that I will have been on my bike for 300 of the 365 days of the year.

"Every day is like our anniversary," Shelagh said yesterday as we cycled along parked cars in Strathcona.
"What do you mean?"
"We celebrate things."
"If you're only counting the years and the decades, you're not going to have a very big number and things are going to go by too fast."

I don't quite know where that last thought came from, but it got me a step closer to the meaning of this writing-the-riding-of-these-days project. I want to remember these mundane days. I want to stop them from mushing into each other, irretrievably lumped into the category of season or year of mode of transportation. I don't want to remember riding a bike as much as I want to remember that on July 22, 2017, I took a pic of the plastic-flamingo-pink patio umbrellas on the old CP rail embankment at Jasper and 109 St. We were riding with Debbie, who we met in Strathcona. Earlier, we peddled behind Saskatchewan Drive and she pointed to a small garden of colourful flowers. She said the flowers put on a show. That struck me. 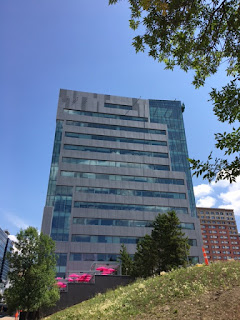 I am filling gold, red, blue, and green notebooks with pencil scrawls of the day not to fight the inevitable feeling that the days went too fast, but to start to answer the verdict that I wasted them by not noticing enough. And that I counted to 75, not 30,000. And that I counted weekends and vacations, not days.

Today is Sunday. It is the finale of the Tour de France. The TV is on as Froome, Barguil, Matthews and Yates lead the peloton through Montgeron on the way to Paris. It was at Au Reveil Matin that the first-ever tour started. The riders were sent off to a gunshot at precisely 3:16pm. It was a Wednesday.

Today I plan to spin around Hawrelak (née Mayfair) Park. Interstellar Rodeo is on. There are big trucks and tents and the feeling of summer in the air. Tonight, I will ride back to the northeast end and lock my bike up outside St. Matthew Church on 132 Ave. Alfred Sieben from down the lane died last week. Prayers for him are tonight.