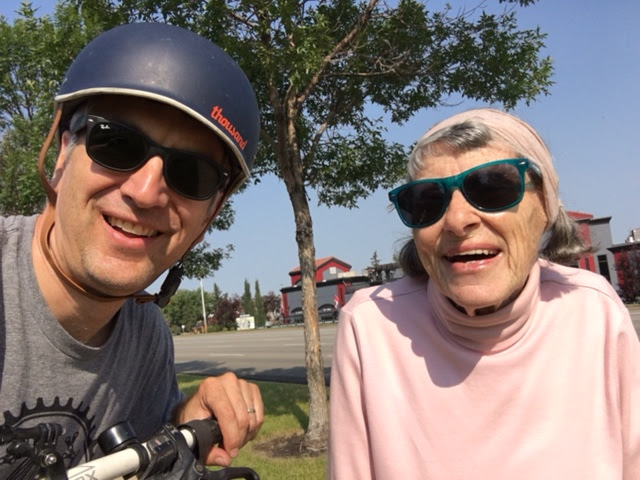 If you happened to be driving west on Stony Plain Road between 170 St and 178 St this morning around 10:30am, and if you glanced over to the sidewalk on the south side of the road, you would have seen two people speaking. A gangly, helmeted man standing over his bicycle was talking to a stylish older woman wearing a floral print skirt, a pink turtleneck, teal-framed sunglasses, her head covered by a summer scarf from which grey pigtails poked out on either side. She moved with the help of a wheeled walker.

You wouldn't have been able to hear why, as they parted, the bicycle rider was laughing, but here is why.

"Tell your wife she has nothing to worry about with you talking to an older woman from Europe!" the woman said.

The laughing, goofy-looking guy was me. She told me her name was Renée. She was walking to McDonald's and was taking a detour from her route because the direct-line sidewalk was under construction. She wondered if she could cut across the box store parking lot behind us. She was only 78 years old. She was wearing knee-high white socks. Still, I suggested she keep to the sidewalk.

And then somehow we started talking bicycles. Renée is from Holland, where "they take care of bike riders." She lived for years in the UK where, with her husband, they rode tens of thousands of miles together. She had a mileage counter on her bike. A blue Phillips junior, she recalled.  The pair rode weekends through the south of England for years. Once they pedalled from Portsmouth to Brighton.

He had a sense of humour, she said.

It was maybe 23 years ago the Tour de France was staged in Portsmouth. Her husband had somehow gotten onto the Eastern Road portion of the course just minutes before the pros, drolly taking the joking applause of the fans, acting the part of the leader of the peloton.

"When my hubby came along they thought, this is him, so they started clapping and cheering and said are you the first one? and he said, yes, yes," she said. "He took all the credit that day, and I laughed and laughed."

We were quiet for a second. And one more.

No, he died a couple of years ago. He was a generation older than Renée. He made it to 100.

Near the end, he had to give up the bike. His balance was not on his side all the time. And she has traded her beloved bicycle's two wheels for her walker's three.

We wished each other the best and said farewell. The cars whipped by. The sun shone. The trees were so green. Then I did two things.

I took a pic as she walked away. 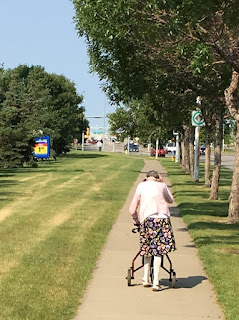 Then I phoned Shelagh and we arranged to meet downtown and ride to the south side together. We had a beer at Situation. We looked through used bookstores. We bought a pork tenderloin and a chicken breast at Ritchie Market. We flowed down 76 Ave and found the shade in Mill Creek Ravine. I took a 10 minute nap on a bench.We stumbled onto an archeological dig site where MacEwan students were unearthing remains of the Vogel meatpacking plant.

I will keep at it.