The humorous descent of Alexis Vuillermoz 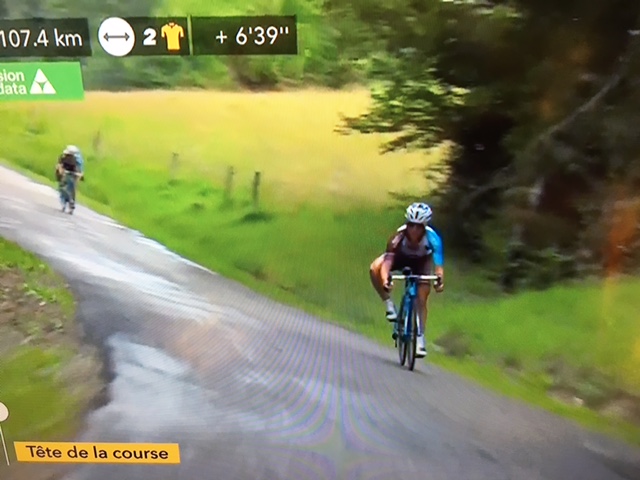 Alexis Vuillermoz is streaming down the side of the Col de la Biche this morning. He is at the head of the race. It is stage 9 of the Tour de France. His front wheel slips slightly in the rain on the road. He keeps his balance. Commentator Robbie McEwen explains the French rider's mountain bike resume has prepared him for the sliding and drifting that happen when courage mixes with a wet descent.

"It's a huge advantage for him," McEwen says.

"When you're used to things getting a little bit loose on you, and staying in control, because it's about staying calm, when it gets loose and you tense up or touch the brakes, that's when you go down. You gotta be able to flow [emphasis not added] with it."

The trickster Vuillermoz is riding a corridor of humor.

The term is from French painter and sculptor and chess player Marcel Duchamp.

"While Dada was a movement of negation and, by the very fact of its negation, turned itself into an appendage of the exact thing it was negating, [Francis] Picabia and I wanted to open up a corridor of humor that once led into dream-imagery and, consequently, into Surrealism."

Lewis Hyde is our commentator now.

"The idea, I think, is that Dada worked against French bourgeois culture, but, ... in its very opposition Dada could never be more than a response to terms set elsewhere," Hyde writes in his Trickster Makes This World.

For some, the trick in art, in life, and, I add, in the Tour de France, which, itself, especially during a stretch of rainy descent, is art and life, is to escape what Hyde calls a singlemindedness. (I see Joyce's Cyclops here.) A singlemindedness would have dictated that Vuillermoz see the patch of rainy pavement as an order to slow down, to use the brakes, to take the corners tentatively. That response to the contradiction of wet versus fast would certainly achieve a kind of balance for the rider who submits, but not the balance that Vuillermoz seems to be chasing, and not the humorous poise he is putting on display.

Hyde slips into an etymological gear, noting that "humor" is not simply the capacity to make others laugh. The word is rooted in umor, the Latin word that means moisture, liquid, dampness.

"To treat ambivalence with humor is to keep it loose; humor oils the joint where contradictions meet," Hyde says. "If humor evaporates, then ambiguity becomes polarized and conflict follows."

This is what Vuillermoz is up to. Or down with. The rain on the road is simply the metaphorical icing on the cake. It is all a timely reminder and a tonic for the calcified positions that mark so many parts of our political discourse.

Hyde, now riding with Simone Weil, brings us to the sommet:

"' Contradiction is a lever of transcendence,' Simone Weil once wrote, but that lever will not work unless accompanied by some oil to keep it loose, a fluid we call humour, the smile of early surrealism, the laughter of Apollo listening to Hermes lie, the smile of Yasoda listening to Krishna, the smile of Athena meeting Odysseus on the beach...," and, let's add, the descent of Alexis Vuillermoz in the humors of the Col de la Biche this morning.

(And a speedy recovery, please, for Richie Porte.)