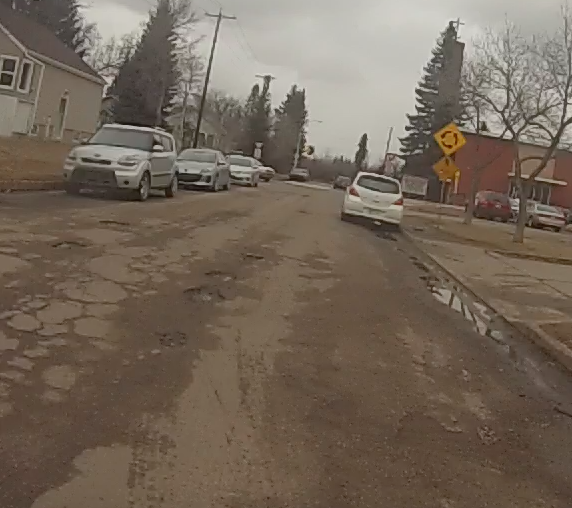 It is April in Edmonton. A fitting time to report the effect of a pothole.

Shooting marbles in the schoolyard was a thrill of spring. The pots we aimed for in those now-buried days were shallow craters dug out of the earth. Cars flowed by on 66 St. Girls jumped in and out of skipping ropes. Peewees were the small marbles. (They were just the right size to go down an alarmed seven-year-old's esophagus once). The regular-sized marbles were the main currency. It took five or so marbles to make a boulder and four boulders to make a jumbo. There were crystals, cat's eyes, creamies, and steelies. These gems all carried different values.

Steelies (jumbo-sized ball bearings, actually) were curious. They sat outside the exchange system. A steelie was technically worth nothing, but was still valuable and coveted. Like the zero concept. The value of a steelie was what the player trying to win it deemed its value to be. I might put four "jums" and a couple of boulders into the mix against a player playing a steelie. It was my introduction to relative value.


We carried our treasured marbles in purple Crown Royal bags gilded with gold draw strings. On my bike I steered nonchalantly with a single hand while the other held the marble bag secure on my pumping leg. I could hear the marbles inside slip across each other with a soft scrape. Some of the older boys organized into marble clubs. I was not allowed to do that.


And then a game started. Two boys crouched down 15 or 20 feet from the pot, their marbles on the ground. An unspoken hierarchy determined who shot first. We each had a different style. Some faced the pot straight on, others held their bodies perpendicular to the shot path. Some twitched nervously, some held themselves together. I watched how the older boys launched the marble and mimicked them. It wasn't a flick of the thumb. The trick was to nestle the thumb into the J-shaped index finger. With a short sweeping motion—and after lips were pursed, eyes narrowed, the distance estimated and the force of the shot worked out and transmitted to the hand—the marble was sent into the world and toward the pot.

Sometimes the marbles found the pot on the first shot. Other shots went long or came up short. The experts could read the contours of the ground and sometimes draw a shot that looked wide right into the heart of the pot. These opening shots transformed the dry earth into a kind of solar system dotted with tiny planets—reds, yellows, blues, greens. We strode above. And then crouched down again, taking turns shooting for the slowly filling pot. The player to sink the last marble won them all. I felt as sick losing as I felt euphoric winning.

Then the school bell rang. Time was up.

As I pedalled along 96 St in Mill Creek yesterday, turning this way and that to avoid the spring potholes, these images of schoolyard marbles shot back into view. Then, those featureless pots were nothing compared to the beautiful marbles themselves, nothing compared to the joy of winning and the pain of losing. Now, those marble pots of memory strike me more as kinds of manhole covers: the interfaces below which run dimly lit channels that echo if you speak into them.