Beware the ice of March 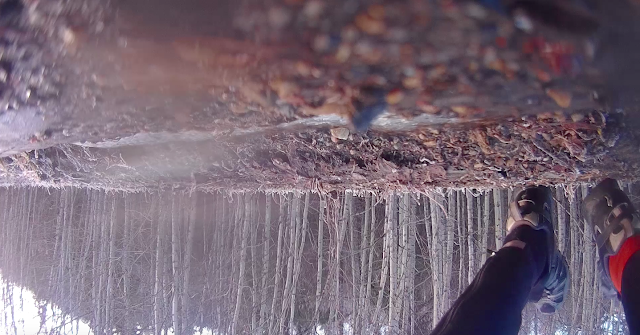 I almost made it out of March without crashing in the MacKinnon Ravine.

There are few transformations in the order of things so fast and so complete as going from being a balanced bicycle rider one instant to a tangle of triangles and hoops the next as will and material unweld themselves and go to confusion together. That ravine in west Edmonton is the stage where I continue to learn that the essence of things reveals itself in accident.

For those following the plot, this was my second coming down to earth in four years on the same stretch of pathway. In 2014, as Florence and the Machine came to mind, this is how it fell apart.

And then on Friday morning, with Craig Finn in the air, things unravelled like this:

(I love the quick shot, at the 0:03 mark, of the Velo Cult patch sewn onto the backside of my shorts. The threads held, Shelagh! Thank you! But what has to go gloriously wrong for the handlebar camera to record the back of my shorts?!)

After the ground, the bicycle fall transported me down to the realm of justice. Who was to blame? My first thought was it wasn't me. It was the ice. Or the sun shining with Pentecostal blindness. Or the fact the workers hadn't arrived yet to sand the area. Couldn't there be boxes along the path that bicycle riders could dig into for sand and do it themselves?  How about a traffic sign that warned of ice ahead? Or an electronic sign that updated the trail conditions through the winter? And so on and on with idea after idea that avoided some other possible causes: the studs I took off my tires, a wider line onto the frozen grass I could have taken, some air I didn't let out of the tires, a route on the top of the bank I didn't take.

A group of us talked it out that evening at Otto.

I realized what bothered me most was being undone by a known risk. Ice in the MacKinnon Ravine has been around since at least March 2014, and maybe longer. I take pride in outthinking the dangers out there. I can tell when a car door will open onto my path on 121 St. I sense when an inching left-turning vehicle driver will gun it across my path on 102 Ave. I can see busted pavement by the curb before it gulps my front tire, giving me time to swerve closer to the curb or, because I know the shape of the traffic behind me, out into the lane to avoid the hole. That dog is on a leash, and that one isn't. That bicycle rider isn't going to slow down as we pass on the 104 Ave bridge over Groat Rd. I can tell you that the car driver behind me at the light on 105 St will ignore the must-turn-right sign and whip past me before merging back to the left.

I take a kind of before-the-fall pride in being able to thread myself through the maze of urban challenges without always blaming City Hall or autocentrism. It's give and take. I value not having a process so good that I don't have to be. Will being safer make me duller? Doesn't insurance do that?


It's a bit Machiavellian. I would rather try to manage fortune myself than petition others for it.

Die Veramung der Merkwelt is biologist Helmet Hemmer's description of one of the consequences of the domestication of animals. John Durham Peters teaches it literally means "the impoverishment of the noticed world." That's what I am trying to get at. I want the bicycling life to be safer, I want others to make it safer, I want sand on the ice to make it safer, but I also sense these wants will make me duller, less aware of my environment, more feeble in my noticing.

But this is selfish, I am told by my friends, and they are right, too. My survival skills shouldn't have to be honed this way. There are decades of safety to catch up on.  If I don't want to make bicycling safer for me, then, at least, can't I summon the spirit to complain about the icy trails for others on their bikes? Or for those who might ride if there was less ice?

I don't have a good answer for that. But I recognize where the fall has landed me. It's a middle ground between the private enjoyment of reading and reacting,  and the public service needed to protect it for others. And, I suppose, me.

I was pondering these things on the ride in this morning when I noticed that the little white pedestrian man was burned out in the traffic lights at 125 St and 102 Ave. I pulled over and reported it to 311.

A couple of blocks later, I caught up to Councillor Andrew Knack.

As we rode, we talked about the fall, who was at fault, what should be done. The city is looking at revamping its ice and snow removal policy later this year, he said. He mentioned how shut-in seniors might benefit from sidewalks and paths free of ice.

When I got home today, I called 311 to report the MacKinnon Ravine fall. It hits when it hits.