The Day I Saw The Bald Eagles

My chest was tight. My nose was dammed. There was a pain behind my left eye, probably because liquid was backed up into my sinuses. I breathed a big breath in three noticeable stages to fill my lungs. I had two things to do. Get my fatbike back from Redbike. They were bringing up the handlebars so there wasn't as much stress on my upper spine. (See 2015 for painful story behind the need for this modification.)  And I had promised to see Dub. He is a good friend and I don't see him as much now that I'm no longer in the newsroom. He helped get me through those five years and helped me put in perspective some unpleasant people.

He was gracious, as always. Texted back to get better, see you soon. Then I went to Redbike to pick up my bike.

On the way home, I saw what I rarely see on the Groat Bridge in the winter, which was people standing by the railing, looking downstream. Then, in a pool of water on the river, I saw what I have never seen, which is what had captured their attention. Two bald eagles. I stopped and watched the birds. I took out my phone. Another cyclist, who later introduced himself as Rabih, rolled up and we exchanged amazements at seeing bald eagles in Edmonton in January as we took pics and video.


After five minutes, the eagles flew away, one under the bridge and one over traffic on the bridge.


We watched the white-headed of the pair drop onto a tree branch on the bank a few hundred metres upstream.

"Should we go and catch up to them?" Rabih asked.

By now I had been standing outside long enough to have lost the body warmth worked up by the ride from Redbike. I was cold.

We rode under the bridge and up the pathway and stopped when we saw a flock of people standing under the eagles, cameras pointed up.


I took about 150 pics with my smartphone before deciding it would be better to take a pic of a pic from a camera up to the challenge of preserving the remarkable scene. A young photographer named Daniel let me share his vision.


By comparison, my shots were good but kinda looked like I wanted to shield the identities of the eagles by digitizing their images! Like we would do in the newsroom when interview subjects didn't want others to know who they were.


I did capture some rare sound. A squadron of ravens on the chase steered the young eagle in the pair into the brittle tree branch, cracking it, disturbing the calm of the older eagle that was sitting on it. For a split second in Edmonton today a tree branch broke while ravens mixed it up with an eagle, and I got it on tape.

By now I was sweating. But, instead of heading home, I Facebook Lived the sight.


Three times before I hit go live I considered that Dub would see the video. And what would he think? I hit go live. A young girl walked up and said: "I wish I could fly up and touch him!"

"But if you did, he would bite you," she stated emphatically.

I didn't consider rare the encounter with the young girl in the way I considered rare the sight of the eagle.


Except for the joggers, who seemed constitutionally unable to break stride to peer at a bald eagle, everyone stopped. A man in camouflage pants who asked me to take his picture with the eagle. A grandmother with two grandchildren, a boy, a girl. A couple walking with a dog that nosed the snow. Everyone was amazed.


Three women approached. Two stared up at the eagle. One held out birdseed for a chickadee that materialized out of thin air. This struck me. Above, a majestic bald eagle surveyed the river valley and raised its left wing and buried its had underneath, picking at something. This was rare. And here was a woman below more interested in the little birds.

I waited around for a few minutes and then headed back to the bridge and down and around and up the MacKinnon Ravine. As I pedalled along the other side of the river from where the eagle still sat, now just a dot, but its white head visible, I thought that value is connected to rarity. If I saw bald eagles every day, I think I would not spend an hour looking at them in winter while ill when I should have rested up to see my friend.

And I sang a line from Tyson.


When I got home, I checked to see that I had the video of the tree branch cracking. Back in the newsroom, that kind of audio would be prized. I texted Dub, told him the plan was back on, and that I was on my way to the arena where his son was skating. I have been listening to a lot of Leonard Cohen lately. The line about seeing if your friends are still there has been with me.

We went for lunch and beer. 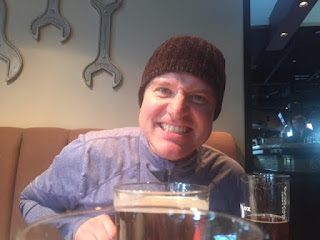 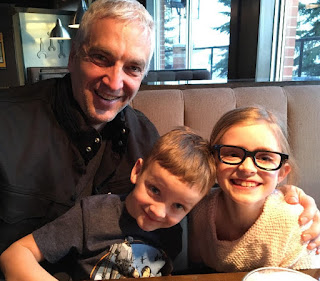 I shared the story of the eagle. We had fun. The eagle might still be sitting on that branch.