I am 28 storeys above the story taking shape below, standing against an Epcor Tower glass balcony and moving my phone into place for a pic of the futurescape. No people are visible. 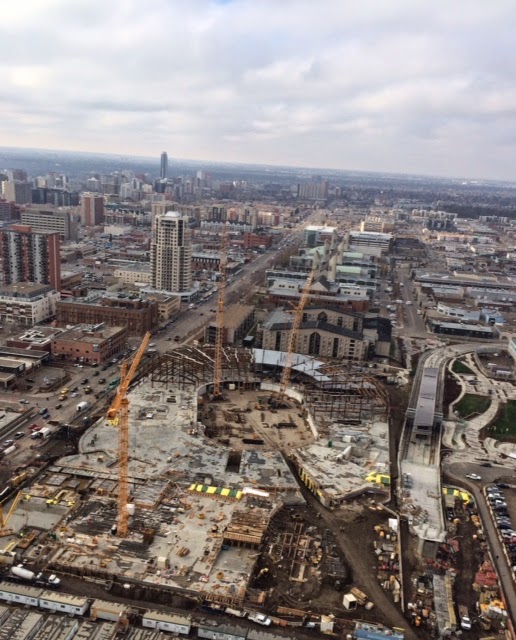 The pic shows what years of politics and weeks of steel look like as the new arena, the centrepiece of the downtown entertainment district, takes shape. I am up here talking to others about the story of our city, but I am thinking of Michel de Certeau. Writing of the experience of being 82 storeys higher than I was, atop the World Trade Center, de Certeau said: "To be lifted to the summit of the World Trade Center is to be lifted out of the city's grasp." And then: "An Icarus flying above these waters, he can ignore the devices of Daedalus in mobile and endless labyrinths far below." And again: "Must one finally fall back into the dark space where crowds move back and forth, crowds that, though visible from on high, are themselves unable to see below?"

And then de Certeau is gone, and red digital numbers contort as I drop in the elevator back to the labyrinth below. At street level it strikes me that all those construction cranes are giant alphabetic structures trying to give birth to words. 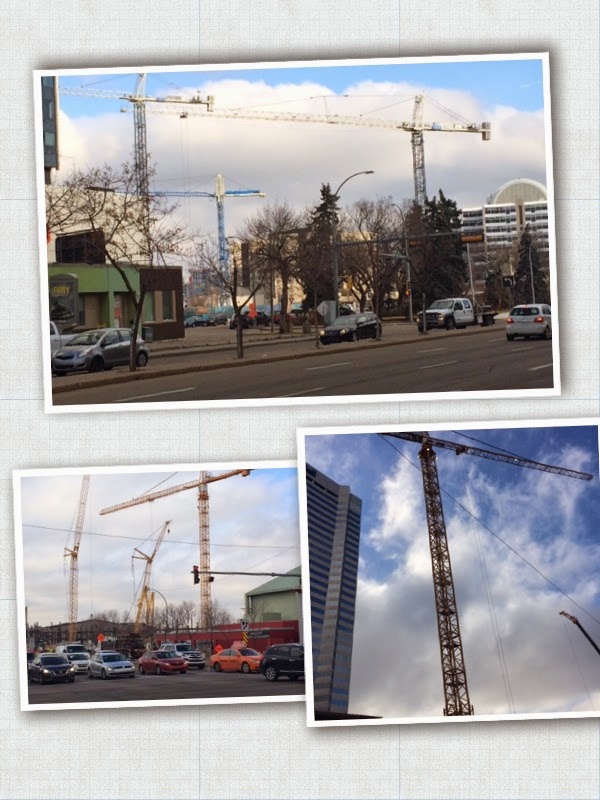 And then there are words.

I hear yelling across 101 St. At first it is hard to place. Then I orient myself. A construction worker is yelling at three people moving towards him. He starts the conversation explosively.

"Can't you read the fucking sign?" he yells, screams at the oncoming trio. The sidewalk is closed, he yells, adding more expletives. Two women turn back. The man he is yelling at confronts him. Under a placard that pronounces, Edmonton Arena District: Welcome To The Hub And Heart Of Edmonton, the two go at it, trading fuck you for fuck you and asshole for asshole in, admittedly, impressive metre. Turn it up:

From where I stood, the construction worker was the provocative one. Yes, the sidewalk was marked closed, but, no, there was no indication where pedestrians should go and the construction worker wasn't offering detour advice. And people will walk. Why shouldn't they? And why the verbal attack with the valence that comes from questioning his literacy? Perhaps, he can't read. Above all, I seriously doubt that that that onstruction worker, who actually represents the arena district as he is screaming and swearing, would have been screaming and swearing if his fellow citizen was Caucasian and dressed in a suit instead of a hoodie. Really, who starts a conversation by swearing at someone? Who doesn't feel he has to stand his ground when sworn at? Somebody at the arena district might want to give construction buddy a lesson in civics.

I am now underground, in the tunnels through which wind-escaping downtowners move, cutting through the Central LRT Station. And I hear words.

"Do you know how I can get to the library?" And the response from the stranger she was asking: "No, sorry, I don't."

The question comes from a woman in an electric wheelchair. She is wearing a long, red leather jacket and a black jacket is visible through the outer jacket's negative V space.

I suggest she takes the train one stop. She says that's a hassle. I say she will be cold outside. She says. let's go. I ask where is she going? She says to Churchill Square for seniors benefits. I wonder what building. She says the library. She says she has had a stroke recently. She says her memory is bad. We start walking. Through ATB Place, up onto Jasper and toward the library. I ask if she knows precisely where she is going. She says she forgot the paper. I ask what was on the paper. She says SAGE. Okay, I say, as we cross in front of City Centre Mall, now we are getting somewhere. The Seniors Association of Greater Edmonton, SAGE. My mother-in-law goes there to knit. The knitting goes to deserving groups. I say my name is Glenn. She says her name is Mae. We get to SAGE, where, it turns out, the friendly ladies at the front desk confirm that May does, in fact, have an appointment at 3 pm. With Dennis.

She laughs as she says she will sit for a picture: 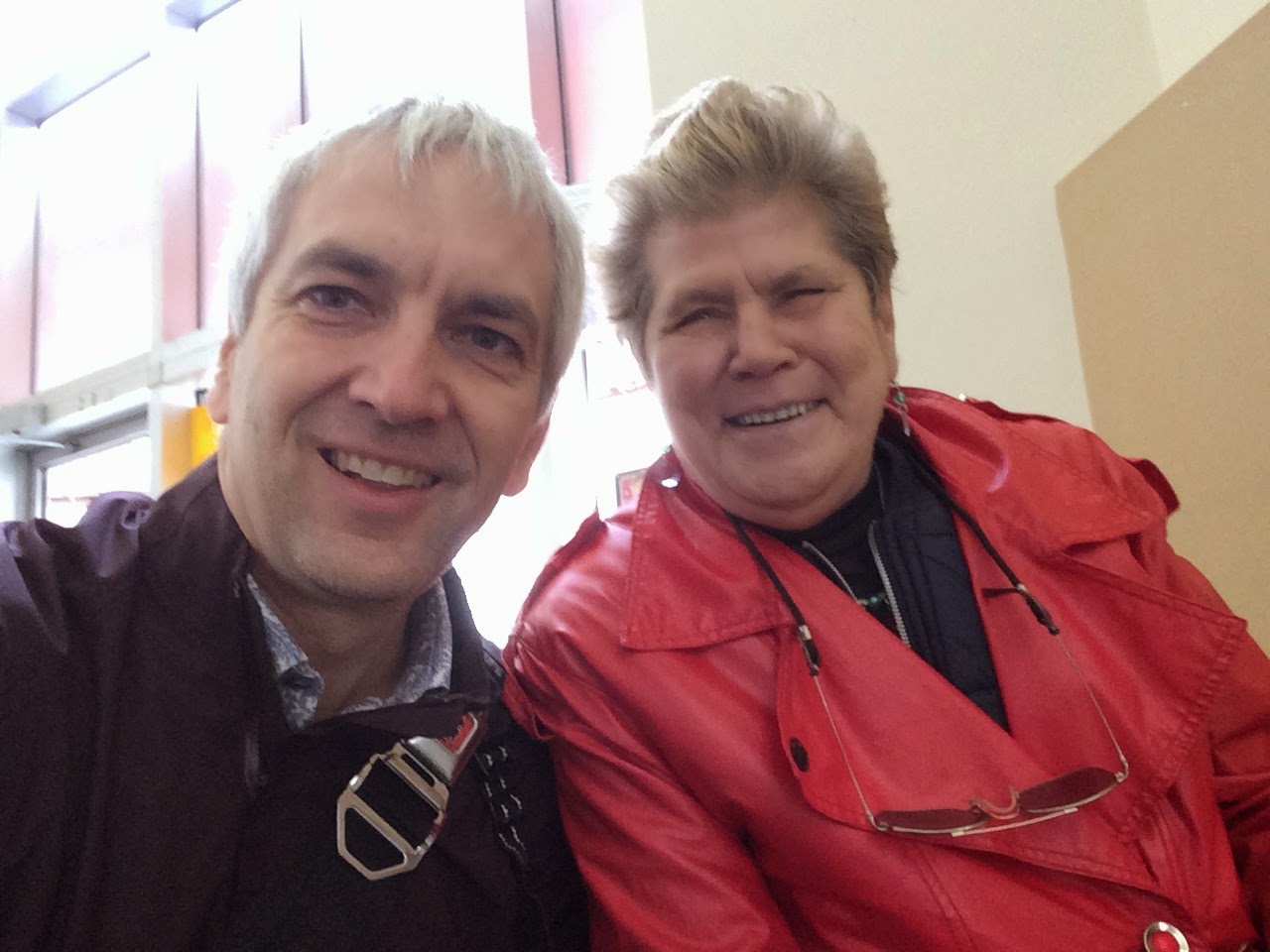 In our four-block walk, I learned Mae is a fellow northender, she went to Queen E (I went to O'Leary; we're enemies, she laughs), that she thinks I am retired, that she remembers Popcorn Playhouse, that it used to be on the edge of the city and now CFRN is in the middle of the city, that she doesn't think it's cold, that she would like a copy of the pic sent to her.

And that she has two wheelchairs. And that the other one has flashing lights that she takes on the road because it's safer than the sidewalks.

It was quite the walk back to work today.