Late Night Thoughts While Listening To The Furnace

January 13, 2013
Two days from now, the beginning of the end of my hike to reach a master's degree begins at the Gow trailhead. It's named after my advisor, Gordon Gow, who runs the master's of arts in communication and technology program (MACT) at the University of Alberta. I'm glad I've made it this far. And I'm grateful I will have some help finding my way up from here. Because there are a lot of signs, pathways and loops up that hill. Some of which actually take you down.

So, on Monday in a meeting with Gow I will decide what theory, what methodology I will carry up, or will carry me up. 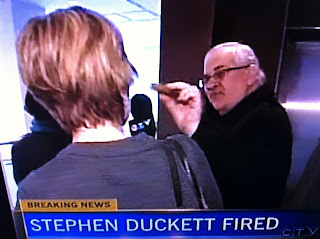 Just over two years ago I found myself, as news director at CTV Edmonton, in a spot with a remarkable view on the mediasphere we live in. A CTV reporter and shooter had just taken part in the questioning and recording of Stephen Duckett, who was then the president and CEO of Alberta Health Services. Infamously, Duckett refused to answer questions about emergency room wait time protocols, preferring, instead, to repeat the refrain that he was eating his cookie.

Stewart Shaw, the station's astute web producer, put the raw video of the encounter on YouTube. Now, this might not sound revolutionary, but it was. Never before (and I don't think since) has raw video been shared like that. Doing so is against the instincts of conventional news stations more accustomed to producing an edited package of news for the viewer to consume.

Sharing the uncut video turned out to be an invitation to do all kinds of things with the video, including mash it up with old Sesame Street video. Duckett lost his job, there were resignations from the AHS board, and I ended up deciding to study the episode as my final project in the MACT program.

I have notebooks full of observations. Now it's time to unpack, and repack light.

I have some naturally occurring data for a case study: a thousand or so YouTube viewer comments to the Duckett video. And Duckett mashups starring Cookie Monster. I have a summary of Hansard debates on the topic. 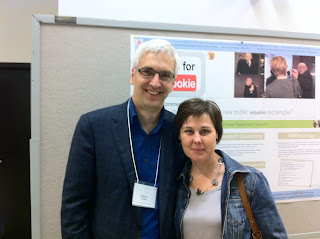 I have a feeling that reception theory fits here: Granted it's not a deep source, but wise geek.com explains that reception theory recognizes the audience as an essential element in the creative process. This seems to stem from the semiological concern about how meaning is generated and conveyed (Berger, Media Analysis Techniques, p. 5).  Back to wisegeek: "Cultural background, education and of course the reader's native language all play a role in his or her understanding and emotional response to a work of literature. According to reception theory, the reading experience activates pre-existing experiences and memories."

Reception theory, as opposed to theories of source-directed or source-predicted media effects,  seems to fit the, what? the spirit of the age? the so-called democratization of media that is described in one way or another by Bruns, Shirky, Gillmor, Lessig and many others. It is about the entity formerly known as the audience and its ability to find its voice, its pictures through easy access to both re-membering and sharing technology. What is the mashup of the Duckett video if not the product of being able to activate pre-exisiting experience and memories -- and, one adds, digitally stored and retrieved and shareable images?

In this era of people-empowering technology, it seems right to go back and spend time with thinkers who, as White writes in "Media Reception Theory: Emerging Perspectives," spoke of the media "not in terms of transport of information but as text which reveals the cultural meanings we are creating in any given historical period" (p.10). These are thinkers, Williams, Thompson, Hoggart, thought important the active participation of the audience. They come from the critical tradition, a crucial premise of which, again according to White, is that "a particular meaning gains the dominant credibility, legitimacy and taken-for-grantedness while other interpretations of reality of less powerful groups are downgraded or excluded" (p. 11).

This feels like some sort of ethnographic methodology, but I am kinda lost on this front.

But I also think that trying to give an account of the Duckett Cookie Incident that ignores the role of humour as a channel of political communication misses the point. Reading Berger's typology of humour  with one eye back to the Duckett video is illuminating. In Duckett (video, YouTube comments, mashups) there are instances of all four basic categories of humor technique: language, logic, identity and action. The YouTube forum is full of hahahas and lols and plays on words and infantile humour and references to the nom nom nom of the Cookie Monster. There are reference to laughable and ridiculous and mentions of South Park and The Simpsons and other comedy shows. There is a brilliant battle between Duckett and the reporters, at the heart of the raw video, over what constitutes the ridiculousness of the event they all have become conscious actors in.

But I am not writing an op-ed. That's where my instincts are, and it's been my undoing as a grad student. I want to get it right. What is my research question? What is all this stuff about operationalizing a theory? Or do I operationalize a concept? How do I make a case that I have found something that is valid or reliable? Is there room for interviews? How do I keep it so that I try to say a lot about a little, and not nothing about everything?

Even from the above, is there a hint about what I want to ask the data? Okay, gotta start somewhere: 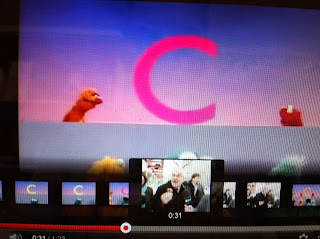 What techniques of humour are apparent in the Duckett Cookie Video?
In the YouTube forum, what is the nature of the comments? Are techniques of humour employed?
Why is humour employed?
Do YouTube correspondents display evidence of superiority, incongruity, psychoanalytic or conceptual humour? This last category of humour brings us back to Berger's semiotics question: How is the meaning of the Duckett video generated?
What is the power of the currency of ridicule in our society? Is it actually any different than it ever was, or is the difference the speed with which it can be shared and a new kind of ridicule that can be generated digitally through mashups? (The premier of the day, Ed Stelmach, reminds us of the visual and shared aspect of the episode when he tells the Alberta legislature just five days after the event that "I think everyone in Alberta watched and saw the offensive comments.)

On Friday as I cycled home from work, I saw Gow walking past me in the opposite direction. Gotta find that trailhead and dump some of the stuff I'm carrying!