A Lost Pair Of Gloves

January 02, 2013
It was unsettling. It started with seeing a pair of gloves that had fallen and were just sitting there in a ball on the road in the slush next to the curb outside the Citadel Theatre today. They were brown and green and sort of white.

I broke my stride for an instant and thought about going back. To what? To pick them up and put them somewhere safe? Can lost gloves be unsafe in any meaningful way? To take a picture of them and post it to twitter with the #lostglovesyeg hashtag? Love in glove, I thought. Lost glove, lost love. And I kept moving. I was on  lunch and on my way down to the trains to cross the river to pick up some books from the library on campus. Even though I have somehow for some reason lately been drawn to lost gloves.

You Are Entering A Quiet Area, the Rutherford Library sign intoned. Intoned. Instoned. Interred. The books on the shelves, the rows of books, each with a name given it by its author, each brought to public life by a publisher, each now, in a way, dead. Lined up like niches in a crypt. This whole library, in a way, a mausoleum of preserved ideas. From that heavy smell I found and borrowed:

And then back on the train and out of the tunnel into the blue sky along the High Level Bridge and over the mostly frozen North Saskatchewan River. I looked down. My eye was caught by the movement of four or five tiny figures standing in snow at the foot of the bridge's massive concrete pillar. They circled another figure, a body, maybe? under a blanket at their feet.

I had a couple of seconds to take a quick pic. 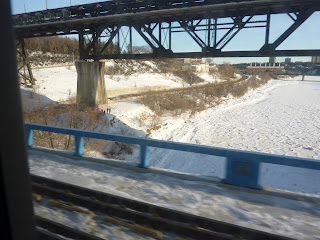 As the train disappeared into the tunnel on the north bank, I looked back and saw two police cars. What was that about? A suicide? I thought, maybe. January 2nd. Unnerved, and for some reason beyond grasp, I got off the train at the next station and caught the next train back across the river. For another look at, what?

But in the time it took to be heading back north again, the scene was gone. The police officers were gone. Traffic that had been blocked by the police cruisers was flowing again. Only a blanket was there. Nobody on this train had any idea what was visible off and down to the right only 10 minutes before.

On my bike ride home, I cycled along River Road and toward the High Level Bridge. And thought for the first time how those pillars could also be giant tombstones. Death was on my mind. And the air smelled like water. I knew I would stop at that pillar I had seen from above. And I did. I walked my bike on to the river bank and saw a grey blanket. And a circle of footprints.

And grasping the icy ground next to the graffitti'd concrete a discarded pair of gloves. 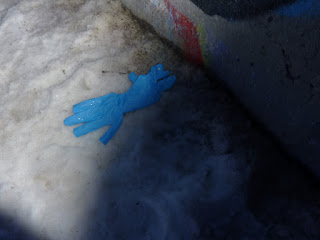