January 29, 2013
Who and what do you think of while lying on the sidewalk in downtown Edmonton changing a flat tire on the right front end of a car of an elderly couple who had asked for help during afternoon rush hour? When it's almost 30 below?

You think about the kind woman at The Sequel cafe who had let you pay tomorrow for lunch earlier today because you didn't have cash. 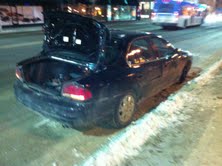 You say words you shouldn't say, out loud, to no one, because you can't find the reinforced spot on the frame where the jack attaches. And you say the same word again when you realize the jack rod can't turn clockwise because of the snow and ice cemented to the curb. And then again when the nuts won't move. And when the loose tire won't budge.

And then you curse your inability to change a tire quickly. But now you don't hear the foul language because the air is so cold the word freezes. Maybe in a couple days, somebody walking down 100 St. toward city hall will all of a sudden hear the word, when it thaws, and look around puzzled. And you think of Wallace Stegner, too. 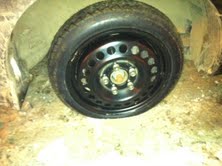 You think about your friend from Quebec and how that summer living there you realized you were a bit lazy. "Finish the job," Daniel would say as you helped him fix that old pickup.

What a scene of man in designer jeans and fancy dress socks, lower back skin exposed, against the cold and that damned front flat tire. Just five minutes before, in the contrived comfort of a downtown office tower, those socks made sense. Here, they just didn't.

"Hello, sir," the woman had said in unbuilt English, meeting eyes. "Can you get tow truck?" She pointed to the broken car a half block north, trunk open, hazards flashing.

We walked inside a utility building in Churchill Square, where I called the AMA. The lines were so jammed I didn't even get a busy signal. I thought about calling another tow truck company, but knew it was so cold the couple, her husband had now walked in, would be waiting for hours. Maybe a day. And they'd get a ticket.

And it was dark, and they were cold, and bewildered. And I learned they were both in their 80s.

I was on my way to a meeting at Roast coffeehouse, a few blocks away, but I wouldn't make it. I spent the best part of the next 45 minutes clearing snow and ice and finally getting the lame tire up off the ground, changed, and the spare put on.

They thanked me. Again and again. We bowed. We took a picture. They made me take money, which I did my best in vain to refuse. Which I will use to pay tomorrow for my lunch today. 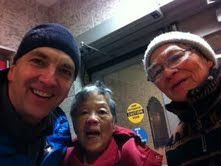