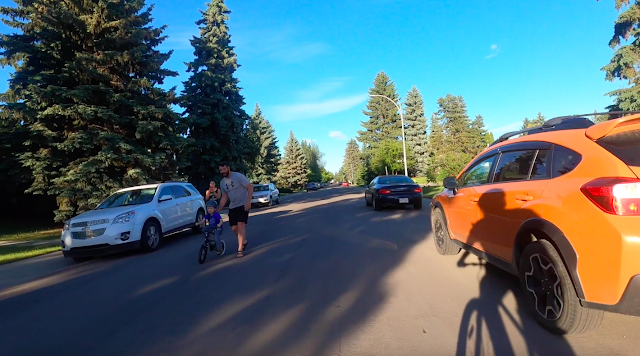 Each week, from the little things that happen in my life, and the smaller set of those things I notice, I try to find three things that made me happy or grateful.
And then say those things out loud in a podcast.
Here's this week's list. 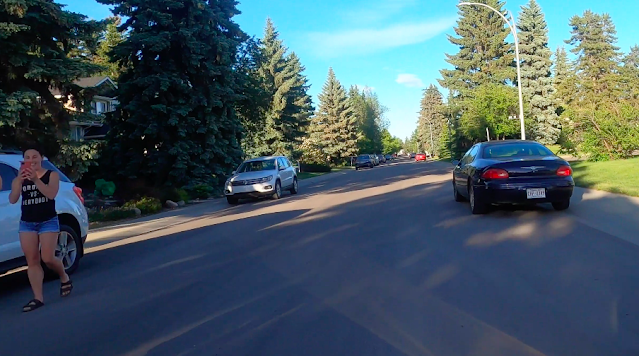 1. Crossing paths 🧬
The little boy was on a little bike, the dad was behind helping with balance and advice, and the mom was over on the side recording the historic moment on her phone. I always expect street and front yard life on that piece of 88th Avenue around the corner from where we live. Bikes are left on lawns, kids in trees talk to each other on walkie talkies. But here was the scene of scenes—a little person learning how to ride a two wheeler. I didn’t want to break the little dude’s concentration as he worked out for himself the marvellous metamorphosis of walker to bicyclist. I gave him a thumbs up and a quick ring of the bell as we passed each other, and I kept pedalling toward the path down from Laurier Drive to the Quesnell Bridge. Halfway down that path there is a traffic warning sign. On the sign are images of a pedestrian next to a bicycle with the word Crossing. 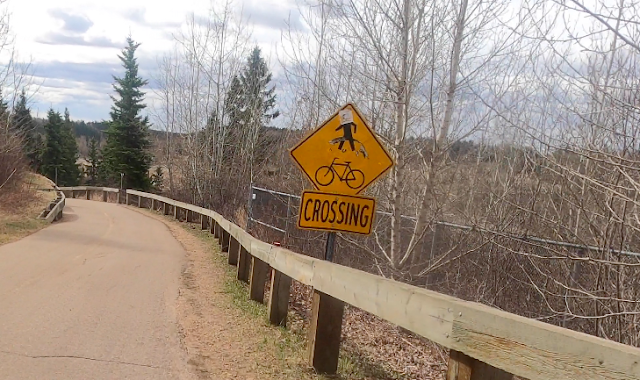 I’ve seen that warning sign hundreds of times. But this time I read it different. This time I read that word Crossing not as the sign maker intended, as in intersection ahead, but as a geneticist might use the word crossing, to mean breeding or making a hybrid. A bike and a human crossing. Which is what was really happening to that boy on his bike on 88th Avenue, as his little arms grew handlebars and his little legs grew cranks and pedals and he became a different being, right in front of his parents’ eyes. I’m glad his mom was rolling. 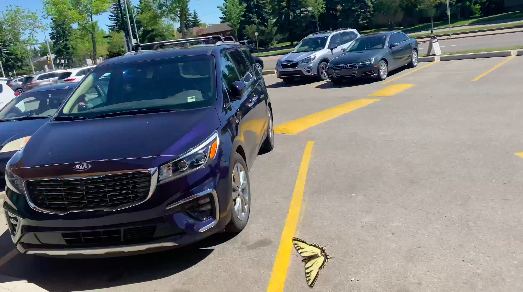 2. Butterfly-by 🐛 🦋
For a good 19 seconds I stood there in the sun on the sidewalk outside Bon Ton Bakery and watched a butterfly flit and flicker by. My first thought was how the girls in Grade 2 played with those fortune tellers, or chatterboxes, the way they opened and closed the triangular panels. The butterfly outside Bon Ton was yellow, with black trim like calligraphy. It flew up and down and across the parking lot asphalt and over the lines of the parking stalls. Six feet up, it bumped into the dark grey glass of the florist’s window, and then shuttled down to the ground, bouncing off the glass as it dropped. Then the insect flew up and up like a piece of film at seven and a half frames per second and disappeared. The noise of the traffic returned. 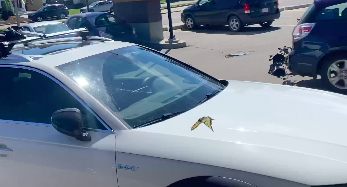 Shelagh emerged from the bakery. I was just watching a butterfly, but I don’t know what it’s name was, I said. I looked it up online later. It was a Canadian Tiger Swallowtail. Now, I know the name of the movie if it ever comes to butterflynet-flix.

3. Live music, finally 🎶 🐦
A great joy of walking in the city isn’t so much the walking, well, it is, but, it’s just as much the ease with which you can stop to look or smell or listen to whatever catches your eye or nose or ear. The stuff between point A and point B that’s worth stopping for. Like that American Robin. We were walking home from Vic’s Super Drugs after vaccinations number two, when that song from the very top needles of a spruce tree made us look up, and point our phones up, and play studio engineer for the recording artist on top of the tree. Who was back at it a couple of mornings later. Very early. 4:07 am early, to be precise. That was the bleary time on the phone when I shuffled to the front door and stood there, the sky already light blue, and listened to that same song. I was more than half asleep but also more than half awake.
I hope you all find some live music soon. Thanks to my friend Nicola for Shazaming the robin for me.
blog bon ton bakery edmonton glenn kubish nicola dinicola