Here's something new, thank you very much! 🗞️ 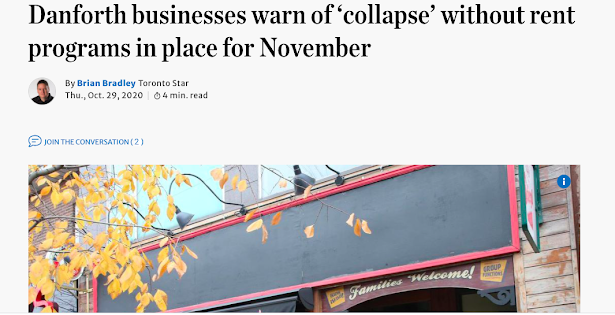 A couple of Toronto Star reporters are doing something cool online. Maybe they've been doing it for awhile. Maybe it's more than just the two of them doing it. Thank you. That's what they're doing. Saying thank you.

A couple of days ago I was following a thread from Brian Bradley that outlined the financial dire straits that restaurants in Toronto's Danforth find themselves in.

At the end of the tweets was this:

Then, today, I caught up on the horrifying story of the automobile violence that had transformed and, now, has erased the life of a woman named Jill Le Clair.

From transportation reporter Ben Spurr, this, too, on Twitter:

If the messages of gratitude are coincidental, it's a happy coincidence. If it's a plan, it's a good plan.

For much of my working life I toiled in newsrooms in Edmonton. Sometimes reporters, yes, were very grateful to those who agreed to be interviewed. Just as often, especially at the broadsheet, they expected the thanks to flow the other way. But in both cases, the thanks or lack of thanks happened or didn't behind the scenes.

The Star reporters are thankful in public. That's new.

News reporters typically see quite clearly the good that they contribute to the democratic public square. And they do do good. What is not always so obvious is the gift of the interviewee. Their time, their trust, their common cause in the work of the reporter in presenting fairly the event that is being covered. All of this, and more, is what the person in front of the microphone donates.

Are reporters kinder than they used to be? Do they see more clearly on a landscape of endless media platforms the value of the interviewee? Have their calculating social media strategists figured out that the likes of me (and 134 others on that Ben Spurr thank you tweet) like a world where people thank each other? Whatever the reason for the thanks, it hits the right note. Thanks.