A little Dylan self help, maybe? 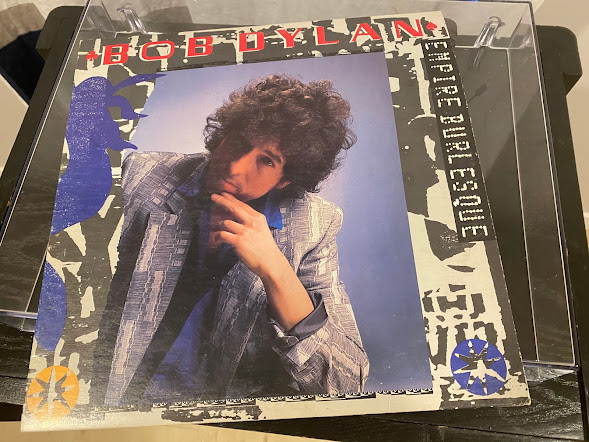 Knowing the mountains that were ahead of me, I brought Dylan along that summer in the Rockies.
Empire Burlesque was out, with a song that, for me, is still in my top 10 Dylans: Tight Connection To My Heart.
It's a question song. The singer repeatedly and insistently and hopelessly asks a question. The question mark is Dylan's punctuation mark. How does it feel to be on your own? How many roads must a man walk down? But with truth so far off, what good would it do? Can you tell me where we're headin', Lincoln County Road or Armageddon? You can't look at much, can you man? Where are you tonight, Sweet Marie? Can you please crawl out your window? O, where have you been, my blue-eyed son? Wait a minute boys, you know who I am? To that list, the singer in Tight Connection asks: Has anybody seen my love? When Dylan asks a question, I'm in.
Tight Connection has more than that vital question, though. It's got great lyrics, echoes of Bogart and Gary Cooper and Hoagy Carmichael. It's got a groove. And female backing vocals that sound new every time I hear them. It doesn't waste a second. Drop the needle and I am deposited somewhere else, somewhere, sure, closer to my heart.
It's also got a line that's tattooed on my heart.
What looks large from a distance
Close up ain't never that big.
Those were the lyrics I wrote on the recipe card that I tucked into the plastic envelope on top of my handlebar pannier as we pedalled from Calgary to Jasper that summer 35 years ago now. The words helped get me up and over Bow Pass. They helped me get up and over Sunwapta Pass.
They have never wandered away. I know Dylan self help isn't exactly a thing, but those words have helped me with bullies and job changes and parenthood and my degree and everything else that, at times, seemed an insurmountable challenge. Because it's the distance and the lack of engagement that can be the enemy. Things don't always get more difficult and bigger the closer you get to them. Digging in, taking the challenge a bit at a time can return problems to their proper, doable proportions.
But, true to Dylan, that's only half the story.
Because too tight a focus is a human problem, too.
I am no stranger to the Fort Edmonton Park footbridge. I ride my bike over it often. I see it the same way every time. The same tight shots of the suspension cables, the giant bolts, the concrete deck, the covered lookout points.
Last week I pedalled down the river a bit and looked back, and saw the bridge that I had seen so many times like I had never seen it before. I think I swore out loud in joy. 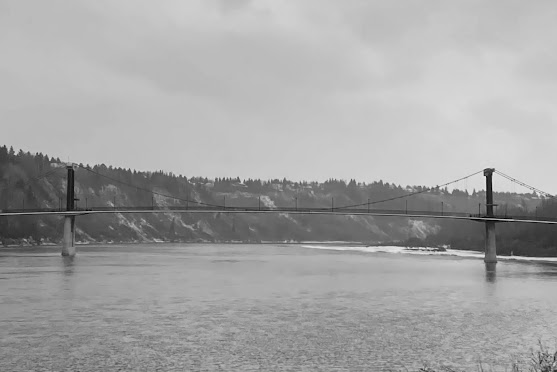 So, yes, it is true that what looks large from a distance close up ain't never that big, but it is also true, albeit less poetically so, that what looks the same up close is, from a distance, marvellous.
That might be the trick. Live life like a photographer. See old things with new eyes. When wide shots are too much, go tight. When tight shots are too routine, go wide. Try to see the small picture, force yourself to see the big picture. A kind of visual strategy for balanced living through focus and a change of perspective.
Because, as Dylan asks in another song on Empire Burlesque, what's your position, baby, what's going on?
blog bob dylan edmonton glenn kubish perspective