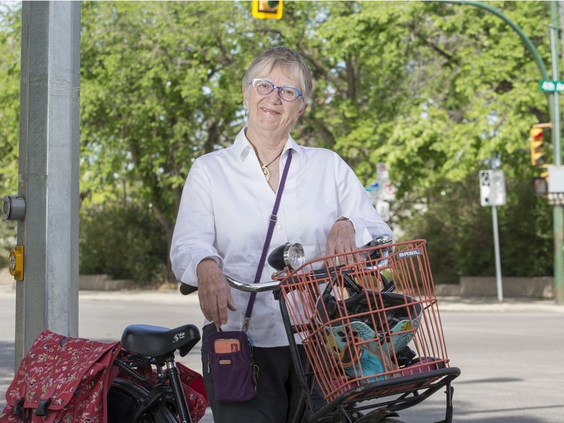 Fitz is a fan of the obits, and, so, it was Fitz who pointed out the death notice of the Saskatoon woman named Cathy Watts (née Drabble), September 3, 1948 - September 8, 2020, that was written by the deceased woman herself.

If you are reading this, it began, I'm no longer here.

Fantastic was a good word for Fitz to use. It captured the eerie sense of being reached from another dimension. For an instant, Cathy Watts's first-person obit felt like an electrically charged communication with someone beyond.

In her auto-bit, Cathy Watts remembered very physical things about her life left behind. The water and rocks of lakes in northern Saskatchewan. The feeling of writing in a notebook. Eating a donut. Quilting. Singing. And other bodily stuff, too. Hugging grandchildren. Swimming nude. Voting. Riding a bicycle. 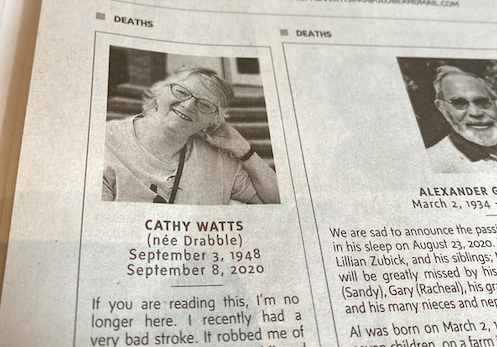 Riding a bicycle was the joy of joys for Cathy Watts.

"Most of all I was passionately in love with cycling," she wrote. "The very first time I got on a bike it was like no other feeling."

For a decade Cathy Watts worked with Saskatoon Cycles. She called herself a happy agitator, pushing and prodding for the pavement, infrastructure and culture to convince more people to get back on their bikes. On the eve of her death, some of those people took part in a solidarity ride past her house. They showed up in person to thank the person who had worked to make space safe for those who choose to move by bike. She heard the bells.

"I was so thrilled when all of you rode your bikes past my bedroom window on a slow roll," Cathy said in the obit. The last time I saw Cathy Watts was in 2019 in Calgary during the Winter Cycling Congress. As she said in the obit, "for a lot of my life cycling wasn't much in style. Certainly not in winter. At some point I thought, 'I need to change this!'" What's needed to "change this" about riding a bike in the winter are the three things Cathy Watts took with her wherever she went around this time of year: a bike, another layer of winter wear and, most of all, the active resistance to the suffocating sense that winter is to be waited out or travelled away from.

It was cold that day as we pedalled out together from the new library, over the river and then back downtown across the red Peace Bridge. It was a very warm cold. 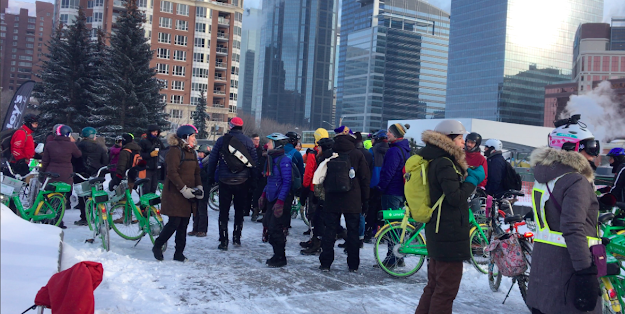 When do you start writing your obituary? If you follow the routine third-person rules, you never technically do. That's left for someone else in the family to piece together after you're gone.

The other answer, of course, is you never stop writing your obituary. The people and places you loved while alive become the stuff gathered up into the sentences laid out in story form by the obituary editor.

Actually writing it is a very bicycle way to go.

It has struck me at times that bicycle riders participate in an uncanny kind of obituary writing as they move. The bicycle can be conceptualized as a kind of recording device into which the rider spins a way of living her life. "A bicycle is a simple solution to a complex problem," Cathy wrote in her obit.

You don't forget the feeling that the bicycle-machine produces.

Your bicycle becomes what you stand for.

"So, if you are reading this, don't be sad and certainly don't send flowers," Cathy said. "Here's what I want you to do, instead. Support my beloved Saskatoon Cycles, because there's still a lot of work to do. Then get on a bike, head for a trail and feel what it's like to be free."