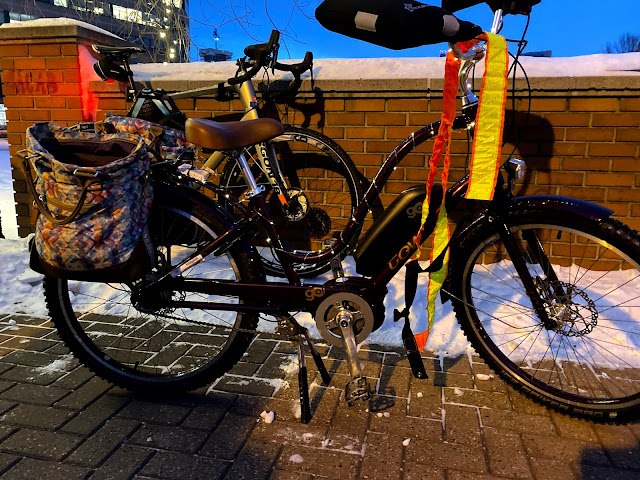 There is a quiet urge to sociability built into the open architecture of the bicycle.

A bicycle is a pre-social media social medium. The bodily encounters invited by the bicycle are the short
waves, hellos, peace signs, thumbs ups, quips, good mornings, traded remarks about the weather, nods,
salutes, smiles, knowing glances, short conversations and other gestures and utterances that riders share
and use to recognize each other as we go by. The openness of the bicycle—no windshield, no doors, no
roof—suggests this way of dealing with each other.

This sociability suggestion is enhanced by, call them what you will, protected bike lanes, cycletrack,
separated bike routes. I call them "humanfrastructure."

This is what I mean.

I posted the video, which was shot on the downtown Edmonton bike lanes and on the Oliverbahn, a stretch of protected bike lane that animates the central Oliver neighbourhood. People replied.

@Partunia: The single best thing about riding a bike for transportation. You can pull over and say Hi to people whenever you want! (It's also fun to make new friends who travel your same route)

@MaraErickson of Edmonton: Love this

@brettbergie of Calgary: This little 45-second short film is awesome. It illustrates the social connections and community that form among people who travel by active transport, free from sound-canceling, socially isolating steel cages.

@3oh6: When people ask why I bike and not drive all year, this. This is why. Nothing beats being able to chat and interact while moving. How many folks made a human connection in their car today? Yeah, thought so.

There was this mixed review from @Fever4Flames.

For a few reasons, I guess. That was the song that was in my head that morning as I pedalled in that -24C morning. The Decemberists are a great band. Colin Meloy's voice is a gift. And I was struck by the way the human frame and its bodily voice, so obvious in a coffee house setting, begin to re-emerge when I communicate by bicycle.

In winter, to boot.