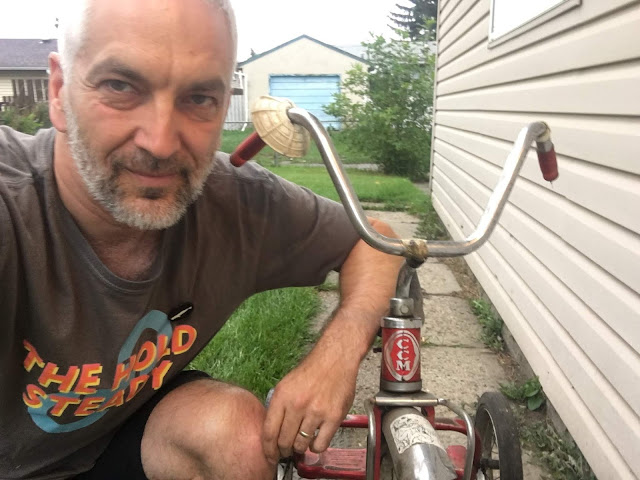 You never forget how to ride a bike.

a) you never forget
and
b) how to ride a bike,

and in the even distribution of syllables across those two thoughts,

and in the memorable way those two thoughts of five syllables displays the storyteller's proportioning out of tension and release—first, the tension of

and then the release of

how to ride a bike

(yes, the satisfaction of a proposition posed and not left suspended),

in this artful use of tension and release that makes a story memorable, that saying, you never forget how to ride a bike, participates rhythmically in what it describes: the unforgettableness that happens when the body, where memories are stored, extends itself—legs into wheels, feet into cranks and pedals, bone into frame—and achieves not just balance, but more: the complicated balance of learning how to step down on a circular stairs that never reach the ground, but even more: how the bicycling body achieves the grand balance of nature and artifice in the rounded scales that contain that most precarious of human goods. Joy.

I learned about balance from George's Cycle on Alberta Avenue. 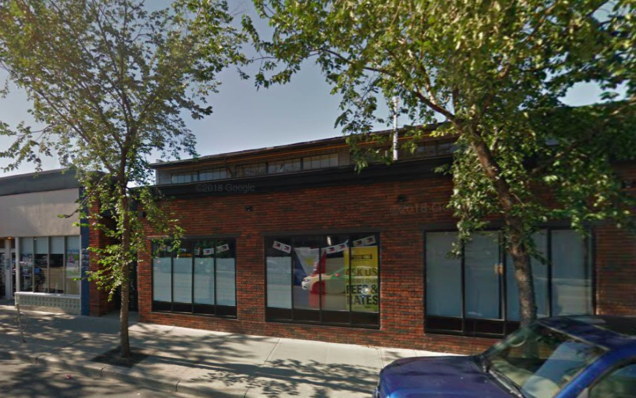 When I was five years old, the chosen vehicle for the kindergarten set was the giant three-wheeler. Sporting a front wheel as big as the small ferris wheel at Klondike Days, two shiny chrome-capped wheels on the back, the craft from George's up on 93 St, it was mine and I loved it.

We lived at 6704. I would piston my legs into the axled pedals and reach my friend Ron Gresiuk's house at 6716, the limit of my wheeled universe, as fast as I could, which was not fast at all, because, whatever else it was in my imagination, and it was, for one thing, an Apollo rocket, that CCM tricycle tattooed with the George's Cycle sticker was also a cleverly engineered control device. 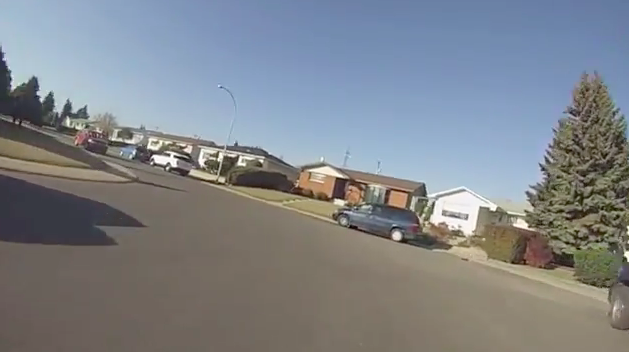 Especially when from its seat I watched the scene of freedom on the street. That's where the bigger boys, as my mother called them with a thin note of disapproval, glided by on their two wheelers, with banana seats and sissy bars. Some of them could toss up a football with one hand, put a spiral on it and catch it again without watching it up or down. They rode with no hands. Some skidded signatures onto the asphalt. They were 10-year-old, jean-jacketed nonchalants. They used bad words. They disappeared laughing around the corner. I pedalled to Ron's and back.

One day my paradigm shifted.

My little body came up with the idea to lean left as I pedalled, just far enough to coax the rear right wheel off the sidewalk. If I managed to keep upright, and keep pedalling, and keep my eyes ahead, and tip neither too far to the left or the right, then I would keep a grip on this new thrill of being bipedal.

I concentrated hard. My tongue stuck out when I concentrated hard. Picture this: a boy, his tongue sticking out, tipping his red, George's Cycle tricycle a few degrees to the left, pedalling to keep the craft moving forward on a wobbly line, at the same time, monitoring, and then adjusting body angle slightly to delay gravity's call, learning how to mix and balance body and machine.

It's no wonder you never forget how to ride a bike. How can you ever forget your own body, and the day you learn to do with it what human beings do with it, which is to apply tools to it—tricycles and then bicycles, yes, but, later, technologies like pencils and pens and typewriters and computers, too—to get places upright? 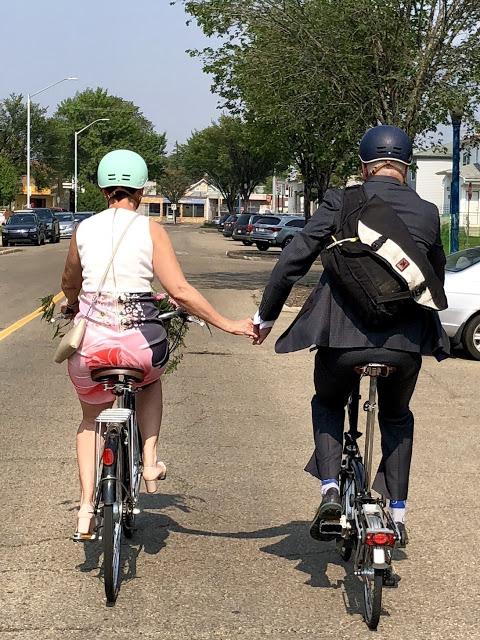 There is another kind of balance known, in time, in the frame of the bicycle rider. This is the balance of riding in gears. 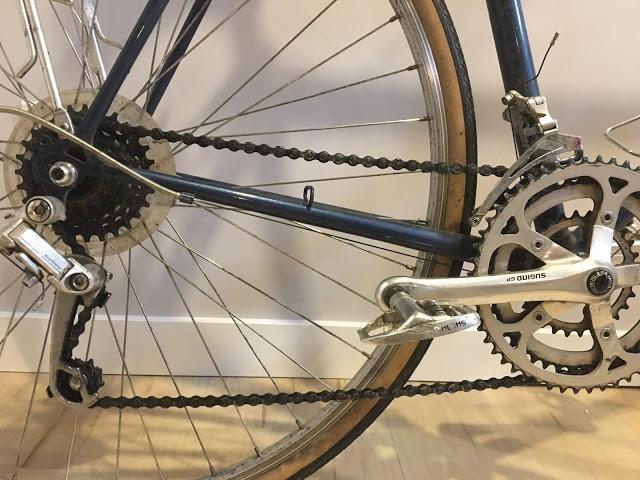 Think of a gear as one in a collection of toothed wheels that work together to change the relation between the speed of a bicycle crank and the speed of the bicycle's wheels. Governed by the derailleur, the gear is a translator. Bicycle riders listen for the ups and downs of the road, take reading of the wind, rain and snow, and, through the teeth of the gears, speak back to what is out there to achieve a kind of balance that allows them to keep going.

I was admitted into the mystery of gears at George's on the day, 15 years or so after the era of the trike-turned-bike, I got my Sherpa 10 speed. 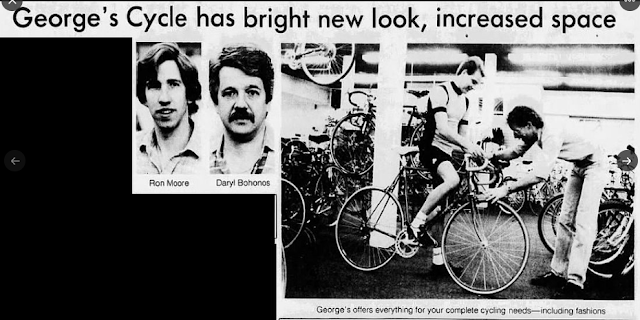 "Always find the right gear," the dude behind the counter taught me.

Stop and think about that lesson: power and wisdom are not the same things. It took Socrates five books in the Republic to get around to the teaching of the philosopher king. I learned it from a guy in a mechanic's apron on Alberta Avenue.

His face is smudged by time. When I hear him talk, it's more like my voice that I hear. But his words are punched like a serial number on my heart. They and their teaching about balance helped me use my gears to climb through the snow of the Bow Pass and the sun of the Sunwapta in the Rockies. And those words have helped me keep going up other mountains and through other weather. 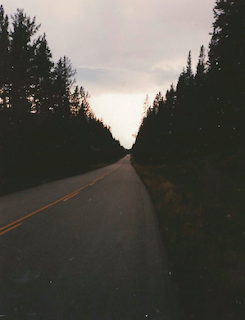 There is a noble lie about riding a bicycle that says it's all about freedom. It is, of course, but what a curious kind of freedom. The freedom that happens when we apply to our bodies a prosthetic device of pedals, tubes, chain, sprockets, rubber, cranks, saddle, stays, cables, rims, spokes and gears.

And learn to keep it all, by George's, in balance.