That rainbow on Friday morning! 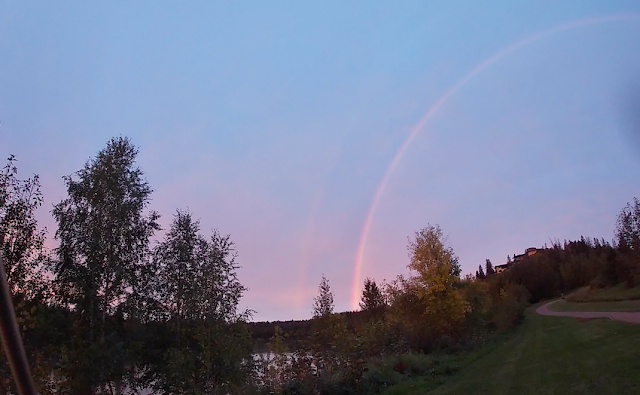 That was as close to a sublime rainbow as I have ever witnessed.

I almost missed it.

I was pedalling east down the MacKinnon Ravine. I had just said hello to the stand of spruce trees I greet going by.  It's curious to hear your own voice talking to trees. I have done this for years. After the trees, the trail curves to the right and then swoops to the left and, ahead, a woman stood off to the side of the trail. She was pointing to the sky behind me. I stopped. A rain drop hit the top of my hand.

"Look" does not give a person much of a clue about what is about to be seen. I turned around. I saw a ribbon of lights arced across the western sky. And before I had the instant needed to apply to it the concept of rainbow, I saw it as a colossal faucet turned on full bore, emptying a torrent of coloured water into the sink of the North Saskatchewan River.

In another instant, it stopped being a spout of light, and became, again, properly, a scientific prism of light.

Somewhere in The End, Knausgaard shares a multi-page meditation on the sublime as he had unexpectedly experienced it years before in Italy watching a cruise ship glide by. The sublime happens not simply when we encounter the beautiful or the grand as much as it does, for Knausgaard, when "something in the world emerges before us, passes through our conception of it and for a brief moment reveals itself the way it is."

I am not sure whether the rainbow experienced as a giant faucet in the sky qualifies as sublime. It's clearly not a faucet. The metaphor factory did quick work. But something happened in that instant—or didn't happen. Didn't have time to happen.

Shelagh and I have a rainbow protocol. Whenever one of us sees a rainbow in the wet sky, or a prism of light patterned on a floor or wall, we announce this fact, and the other comes to look. And so, we have shared rainbows on 148 St in Edmonton: 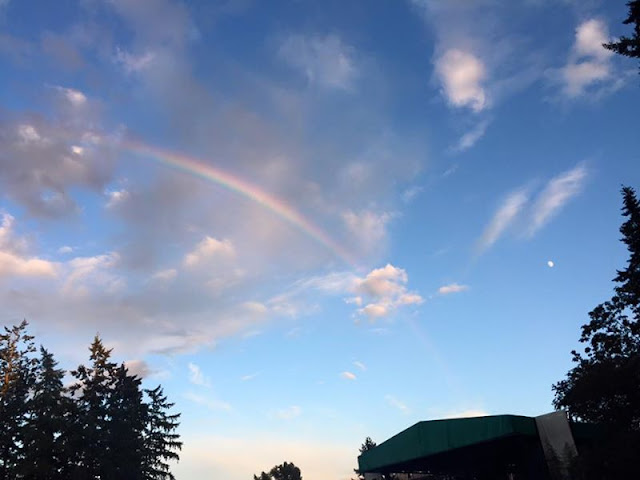 On the highway to Calgary during the polar vortex: 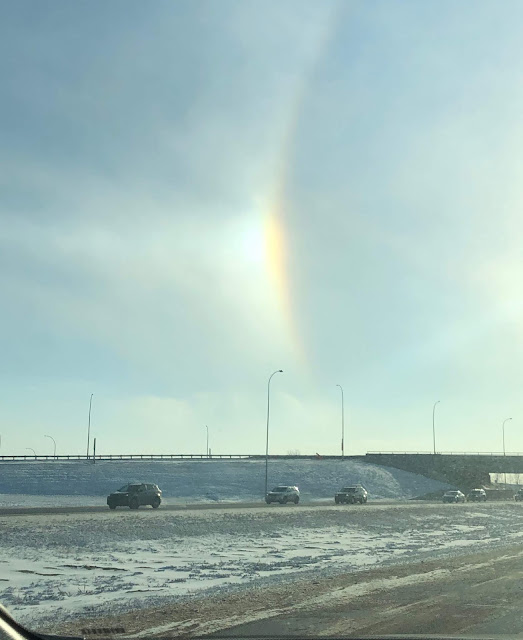 And in smaller stained-glass forms on the kitchen floor: 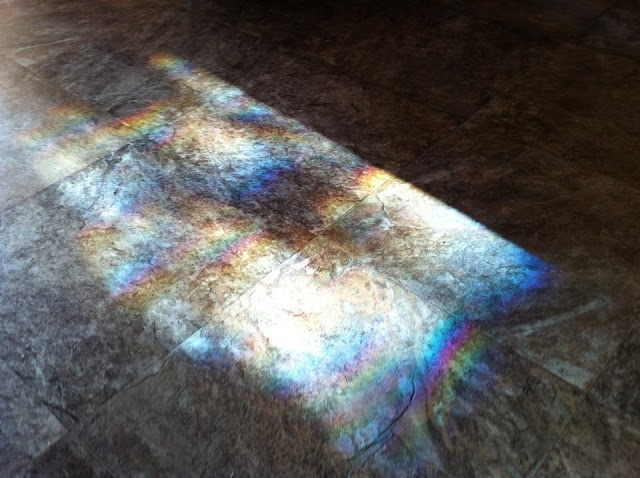 But, unlike the "Look" rainbow, all of these rainbows are announced as such. We know what's coming. We can picture them before seeing them. The "Look" rainbow was different. It felt like it flowed in, powerfully, before any perceptual frame could be constructed.

In the MacKinnon Ravine, I stood there amazed, thanked the kind stranger for the gift and then phoned Shelagh,  The Rainbow Protocol and all. Here's what it sounded like:

The perceptive viewer will have noticed that humanity's friend, Darren Markland, pedalled through the shot as I talked to Shelagh. He turned back. He started talking about the small number of visibly distinct harmonics.