We winter together. (Or, thanks) 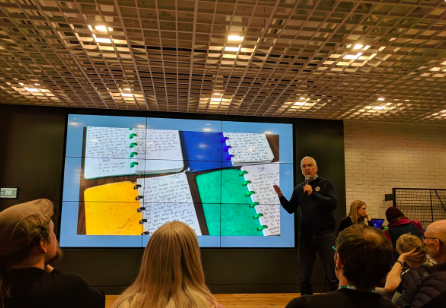 At the Winter Bike Congress in Calgary earlier this month, I said, in a kind of convoluted manner that took six minutes and 40 seconds to spit out...I said, in 20 slides, some of which were painful to relive, some nostalgic...I said, in words I tried to get right in the one shot I had in front of some of the very people who I most wanted to say the word to...I said: thanks.

Here's my Pecha Kucha called We Winter Together. 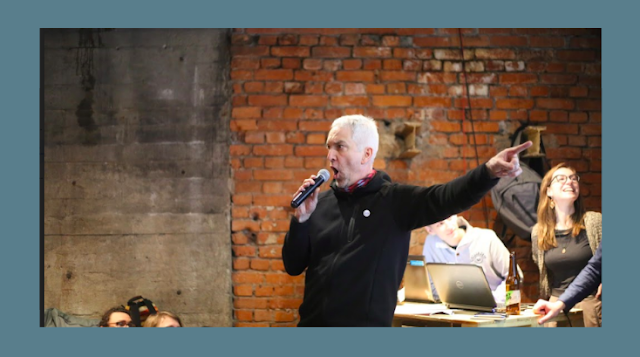 This was me. Making a heartfelt point about Russia at last year's Pecha Kucha night in Moscow.
I fell in with a stellar band of winter bike riders and storytellers that night.
It would take me another month to fully appreciate what I'm doing in this picture.
I mean, look! I am lifting my left arm. 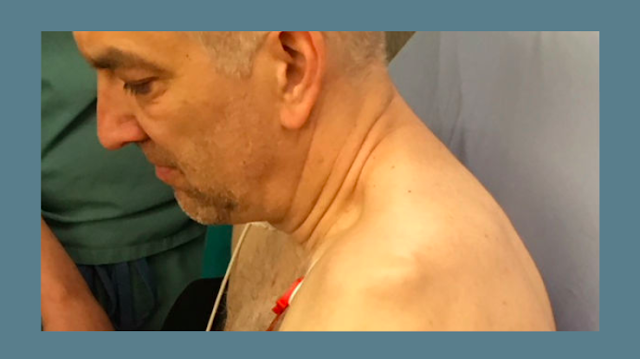 This was a month later.
This was my left arm.
My shoulder is fractured and dislocated.
I fell off my bike.
Like Caesar, I did not beware the ice of March.
But I was aware of how beautiful the ride was on the decline before the fall! 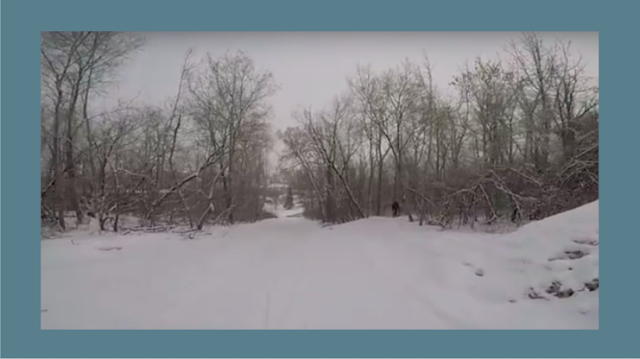 Look! The riverbank trees were poking out of the ground like a pack of giant pencils.
But, while I was busy sharpening pencils between my temples/
I lost my front wheel, I lost my pedals/
I landed twisted like a pretzel.
The pain was keen, both physical and also mental/
What I yelled out obscene/
And not here re-presentable

I was helpless.
Except... 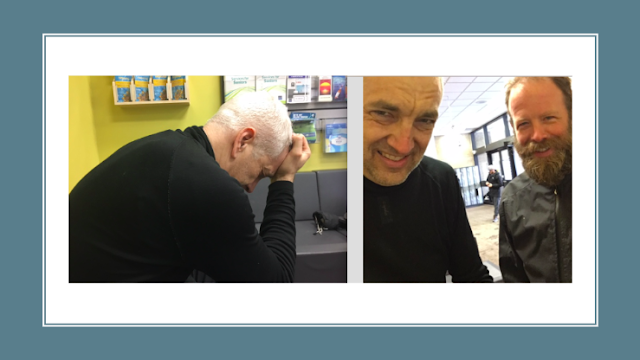 ... I was riding that day with my friend Darren. He's a medical doctor. And he explained that the excruciating pain I was in was my body's way of protecting my body from further injury.
The explanation made my feel a little less alone.
Typical Doc.
He does not winter alone. 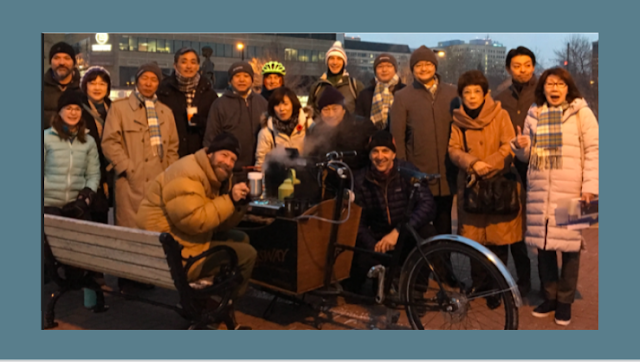 I mean, look, there he is in his puffy parka sitting next to a cargo bike he retrofitted with a propane stove and water reservoir and coffee grinder into a cargo bike that makes cappuccino for us.
We call him The Handlebarista.
Politicians from the winter city of Sapporo insisted on meeting him when they visited Edmonton.
Okay, where was I? 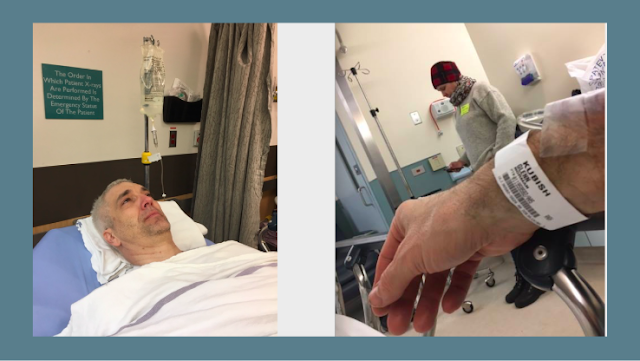 Right.
On a stretcher, on drugs, and delirious.
But remembering very vividly a night 40 years before when I was still a teenager.
I was in the back seat of the family car, we were driving home, it was dark outside, my dad was driving, he had one hand on the steering wheel, he was in pain.
He had just broken his collarbone. 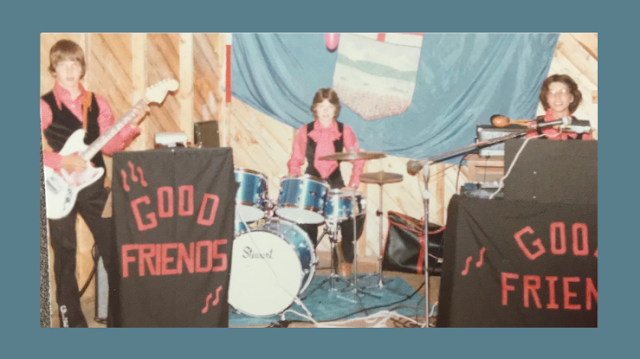 You see, back in those long-ago days, I played in a little dance band called the Good Friends.
That's me on guitar. Sandra on drums. Carol on keyboards.
We were too young to drive to our own gigs, so our parents drove us, and helped us set up. Like roadies.
My dad broke his collarbone when he was carrying a speaker and got a little too close to the edge of the stage.
Okay, where was I? 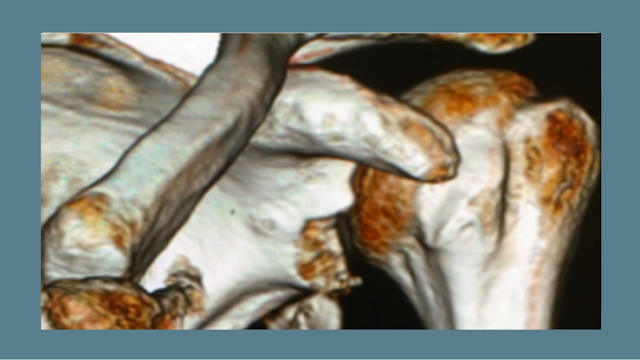 Right.
Looking at an image of my own busted shoulder that looked kinda like a plate of chicken dinner leftovers.
"Can I ride my bike tomorrow?" I asked the technician.
My wife answered in the negative.
Fitting for an x-ray room.
And, no, Shelagh said lovingly, don't worry about your streak.
Yes, my streak. 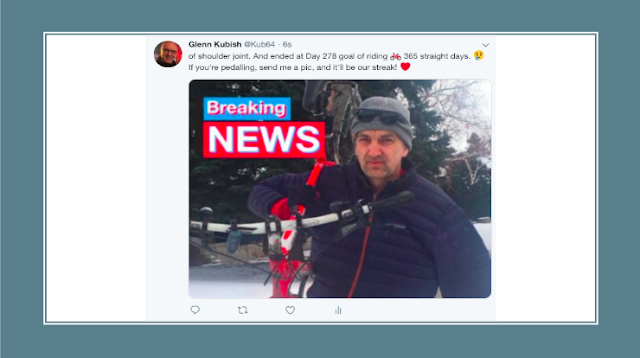 My streak was over.
The idea behind my streak was to ride my bike for 365 straight days, look and notice something different about the world out there every ride, write it down, take a pic, share it.
I made it to Day 278.
On that sad day I tweeted out if you're out there pedalling, send me your pic and it'll be our streak. 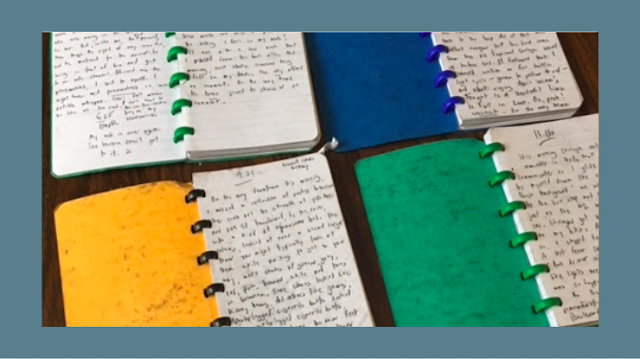 Because I loved my little streak. My notebooks were filled with scribblings of people and places who made an impression on me. That was the imperative, actually. Be curious. Ride. Record. Repeat.
It was an exercise in action-contemplation—the classical balance of riding a bicycle in the city. 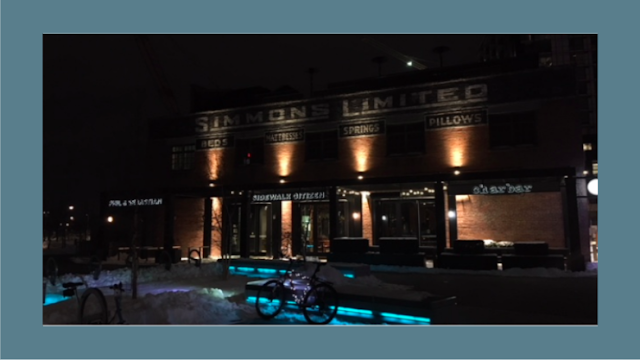 This was November 7, Day 134 of my streak.
My bike is out front of the Simmons Building here in Calgary. I came down to meet Brett and ride with her on a ride she organized to mark the first anniversary of the death of St. Leonard Cohen.
We rode along the Bow together singing minor fall, major lift. 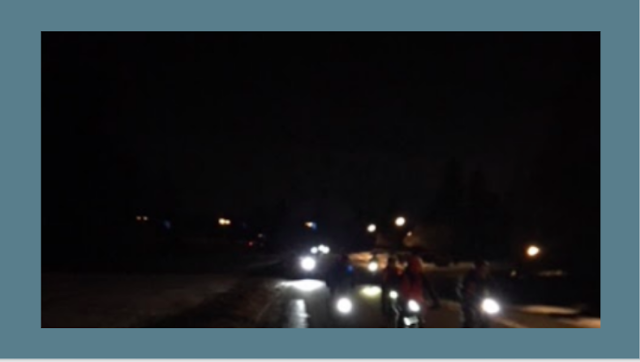 This was December 11, Day 169 of my streak.
Back in Edmonton, up early with friends on a food bank fundraising ride.
I looked back and saw the bike lights against the blackness and I thought, yes, that's it: a constellation of winter bike riders. That is our collective noun. 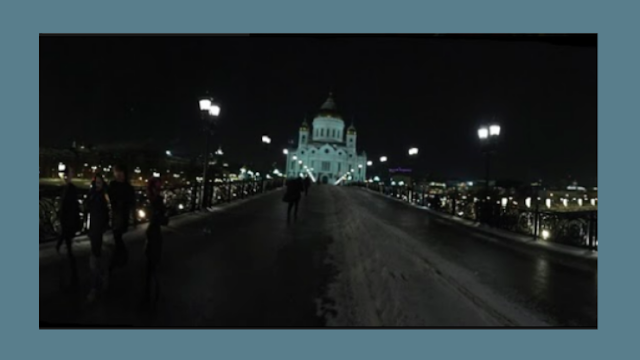 This was February 9, Day 229 of my streak.
In Moscow, pedalling across a bridge toward a luminous cathedral after Pecha—or Pekka—Kucha night. I wasn't even sure I'd keep the streak alive until my friend Pekka from Finland offered my his bike with minutes to spare before midnight. 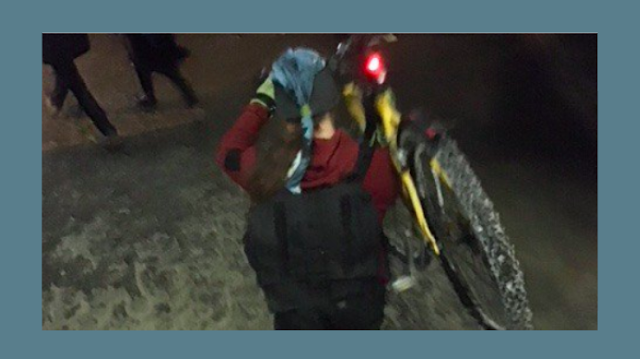 This is Pekka carrying his bike back down off the bridge when I returned, heart full, streak intact.
"Take my bike," he had said. "Ride out across the second bridge and stop for a view. We'll wait for you until you get back."
That we'll-wait-for-you-until-you-get-back kindness spread during my injury time off my bike. 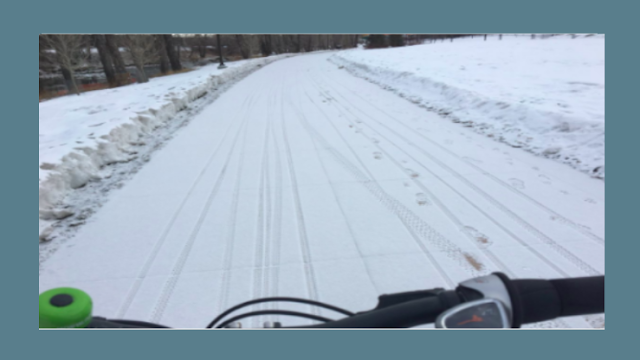 Friends gifted me pics of their rides to keep the streak alive.
This pic is for @kub64 whose goal of riding 365 straight days was derailed by injury, Tom from Calgary posted on Twitter. All those tracks in the snow are people riding for you.
April 5.
Day 284.
Of our streak. 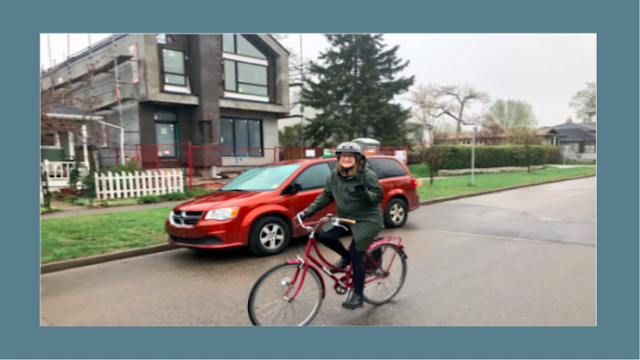 May 9, Day 318 of our streak came courtesy the @commit2commute team here in Calgary. Second last day of work before the baby comes, keeping your streak and my sanity alive!
Our streak, my sanity stayed alive thanks to pics from friends in Calgary, Edmonton, Minneapolis, Toronto, Washington DC, England, even Ho Chi Minh City. 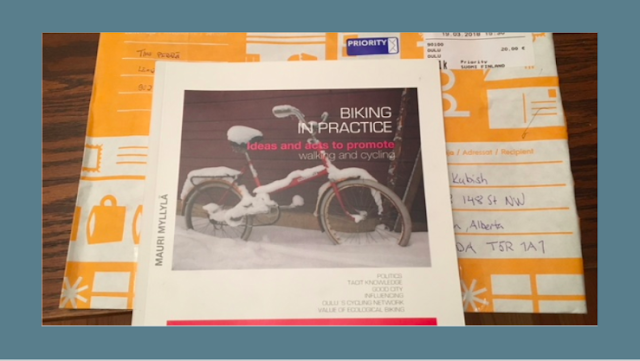 My friend Timo from Finland mailed me a winter cycling book.
As I opened the package, it struck me that my friends were carrying me, they were delivering me through my down time. 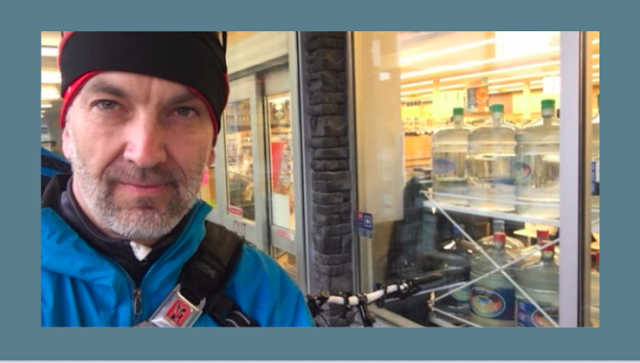 Until June 10, the first medically and spousally sanctioned ride since my fall. I rode for groceries, gingerly.
The rain was on my face, the wind was on my face. It was not snow, but I was back in my elements.
Day 349. 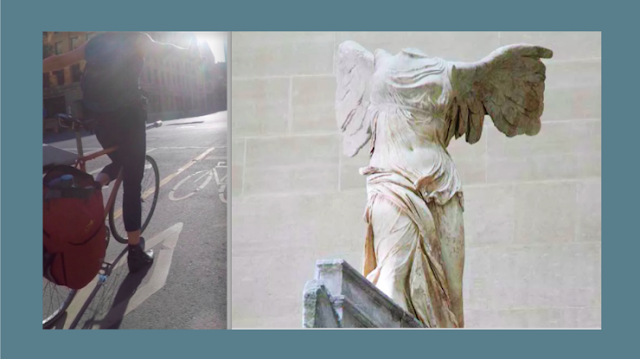 And then 365 days after the streak started, it ended, at a red light.
Stopped next to me, arms outstretched, shoulders strong, a fellow cyclist transformed right there on the 102 Ave bike lane in Edmonton into the famous winged victory statue.
By Nike, we did it together. 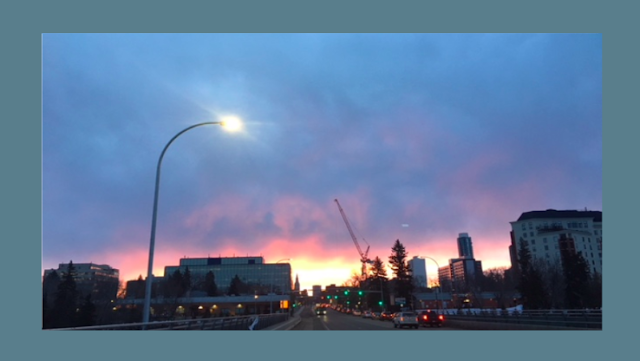 Rewind.
I took this pic four days before my fall. Maybe I knew the crash was coming.
"The sunrise," I wrote, "has touches of yellow and orange and gold and pink and blue and purple and black. Like a bruise. The day starts bruised."
Indeed, friends, the days start bruised. We are bruised. We may fall alone. But we can winter together.
Thanks.
blog Brett Bergie Calgary Commit2Commute cycling darren markland edmonton glenn kubish Pekka Tahkola Timo Perälä Tom Babin winter bike congress winter cycling