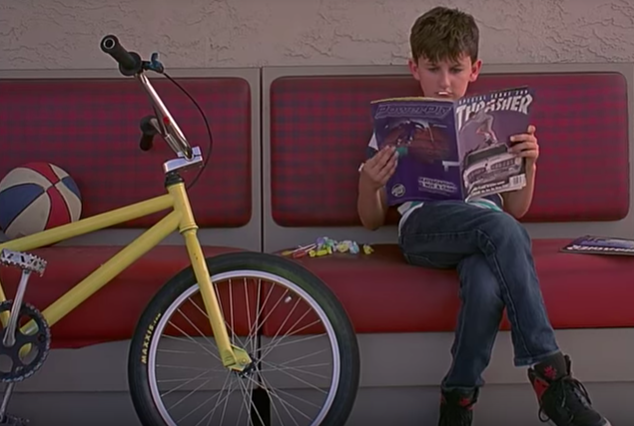 Hands up if you've used the word astride in conversation lately. Or ever? How about the first song that comes to mind that contains astride in the lyrics? Right. Just the Father John Misty fans. And a lone Walt Whitman disciple there at the back with an arm up.

Astride is a perfectly good preposition, It comes down to us from Middle English and preserves the meaning of "extending across" or "having one leg on each side of."  He sat astride a horse, for example. Chekhov stood astride the 20th century, for example. The sailors at work astride the spars, for example.

In our time, Pedro The Lion uses the old word in a new song about a beloved yellow bike from childhood. David Bazan sings:

But I remember what it was like
Astride my yellow bike
First freedom, second life
All the places I could ride...


It's a wonderful song that make me consider how truly I hear.

On first listen, it is a nostalgic song in the well-worn theme of the freedom of the first bicycle. In my memory's theatre, I screen by reflex my own version. In this remake, a green bike replaces Bazan's yellow bike, the alleys of northeast Edmonton stand in for the asphalt of Phoenix, and Bing's corner store on 66 St is the Summer Market on North 7th Street. We do this to songs, I suppose. Graft ourselves onto them, refigure and disfigure them.

After a few listens, you get closer to the quite clear and very obvious sad notes in the writing. This isn't just a song that recites bicycling's declaration of independence. There is regret in never going back home. There is a little ache inside. Now an automobile highway commuter, the grownup singer loves the road, but that road takes his memory back to the loneliness of the roads pedalled as a boy. When he had no one to  ride with, no one to ride to the playground to shoot hoops with, no one to ride to the store with. Astride a bicycle in those days, yes, but also pedalling divided and apart from a riding companion. Astride still works.


(After writing those words "Touring in the Rockies" in the paragraph above, I dug through my saved online photos and found this pic. It shows J and M looking back to my camera in the 80s as we headed from Banff to Jasper. Over time, the photo itself has taken on a quality of astrideness—existing across time, both there and here.)

In his great poem Crossing Brooklyn Ferry the immortal Whitman confronts gaps—the space between Brooklynites then and now who contemplate the same vistas. And the space between the reader who now reads the words written by the poet then.

What is it then between us?
What is the count of the scores or hundreds of years between us?


We living live across these mysterious divides. We exist astride time and place. Bicycle riders know this keenly. It's why the saying "you never forget how to ride a bike" resonates. Indeed, today, I am riding my fatbike through the snow on the Oliverbahn bike lane while, simultaneously, I also pump my seven-year-old legs joyfully and aim my green Mustang for the grey puddles on 67 Street. Writing tire prints onto the road. Now that my mother has said I can take out my bike after winter. As I pedal the Oliverbahn in the snow.

These remembrances of bicycle rides past are sweet, but tinged with sadness. The illusion that time stands still does break up. Years flow for the gutter and are swallowed whole by the sewer's gullet. I am now a 54-year-old pedalling in the snow. In Yellow Bike, David Bazan is a 42-year-old father reliving behind the wheel the loneliness first tasted on a bicycle.

The consolation comes, as it always has, from the writers who reach out from beyond space and time.


But if you keep your legs pumping
Despite everything
Well, you can take that sting...


It is not upon you alone the dark patches fall...


I am grateful for the astriders who still move among us.