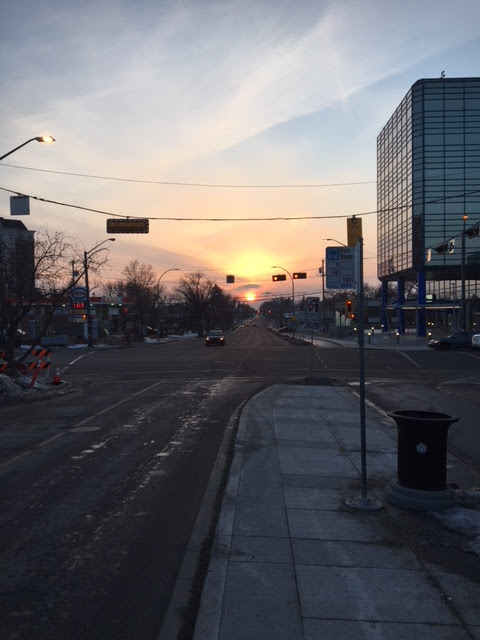 This was my view of Stonyhenge yesterday.

Stonyhenge would be exactly two blocks north on Stony Plain Rd as the setting sun at this time of year, the vernal equinox, plops right down the line of the east-west avenues in Edmonton, a city laid out on a precise directional grid. This was more 102henge. Not quite the wordplay.

I took the above pic at 7:35 pm as I watched the sun arrange itself down the avenue, the magic moment of harmony slated for 7:40 pm. The phenomenon of sun down avenue has been called Edmontonhenge, a tribute to Manhattanhenge, the term coined by Neil deGrasse Tyson, who likened the glow of light down the canyon streets of New York City around this time of year to Stonehenge, the ring of prehistoric monuments in England that draws archeologists and sun worshippers and mystics.


My view of the celestial-historic spectacle happened just off the bike lane on 102 Ave at 124 St. I pedalled there a few minutes early and stopped and stood and watched. This was the picture at 7:36 pm:


And then at 7:37 pm, as the sun commented on its punier versions:


A minute later the gauze of the low clouds had started to obscure the sun:


Then a minute later, the #1 rolled by right on schedule:


And then, at 7:40 pm on the dot, the setting sun had the avenue to itself, and its moment in the clouds:


It was all very thrilling to witness this cosmic equation play out. A kind of punctuation mark from the realm above. I tried to explain what was happening to a slightly startled stranger at the nearby bus stop.

Tonight is another chance to view the event. I will try to get to Stony Plain Rd!

Thanks to Janice for giving me the time of day. Above all, thanks to the sun.
blog edmonton Edmontonhenge glenn kubish Manhattanhenge Neil deGrasse Tyson Stonehenge