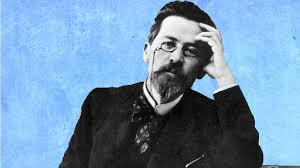 Here are four more from the forest of pages read. 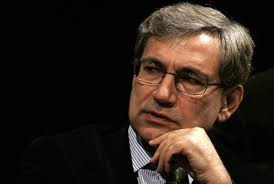 "It's as if the Venetian paintings were made to frighten us," said my Enishte later. "And it isn't enough that we be in awe of the authority and money of these men who commission the works, they also want us to know that simply existing in this world is a very special, very mysterious event."
- Orhan Pamuk, My Name Is Red
I love the final clause. No difficult words. No verbs more exalted than want, know and is. But a clause that forces you to mark it and write it out in pencil on p. 108 of Chapter 20. Because it is tuned true. 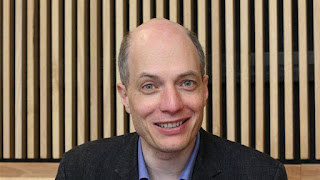 Thinking improves when parts of the mind are given other tasks, are charged with listening to music or following a line of trees.
- Alain de Botton, The Art Of Travel
I enjoy it when a writer can pull off the comma-separated repetition of are given, are charged. I admire it when a writer is confident enough to use to be verbs, and, no less, in the passive voice, twice. I respect a writer who can plant trees in a sentence. 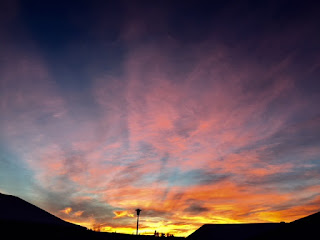 Wow! It looks just like the puzzle we're making downstairs!
- Eleanor Kubish, yesterday
My mom, Shelagh and I had just walked out the front door of my parents' house in the northeast end. My were cued by an alarm clock my mom had set to remind her to go outside to look for the big moon. We didn't quite get to the moon. The sunset got us first. My mother's simile reminded me of the many ways we re-key the natural outdoors into the artificial indoors. This practice used to trouble me.  Why as pretty as a postcard? why this reminds me of a movie? why, wow, that's like a painting? and so on and so on? But Pamuk's Tree, speaking about the thief who understood things, has, a point: "[He] had the refinement to realize that looking at the drawing of a tree is more pleasant than looking at a tree..." (p. 49).