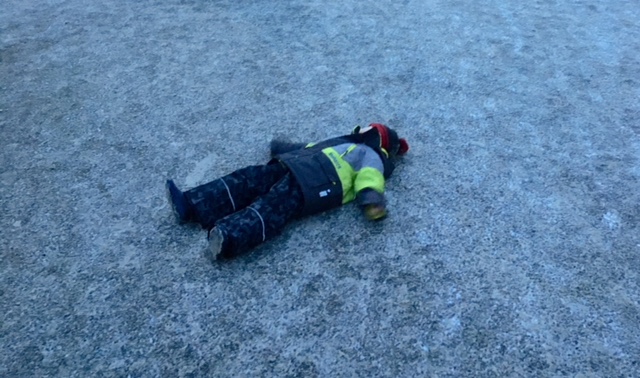 Nothing is wrong here. The boy lying in the middle of Alberta Avenue is making a snow angel on the asphalt. Why wouldn't he? There is snow. He is a child. His parents are busy with the other little ones. There is no danger. He got back up the second time his father called.

The avenue is closed for the Deep Freeze: A Byzantine Winter Festival. The celebration is the work of wonderful people in the community who work all year to program two days of winter spectacle for the rest of us.

Including the young boy whose view of the Alberta Avenue sky must have been marvelous.

The sight brought to mind the start of a paragraph from a book I have on the go. It's called The Hidden Life of Trees: What They Feel, How They Communicate. It's written by Peter Wohlleben. The passage I am remembering deals with dead trees.

Here is the start of the paragraph that I wouldn't do a good enough job trying to paraphrase.


The importance of trees for streams continues even after death. When a dead beech falls across a streambed, it lies there for decades. It acts like a small dam and creates tiny pockets of calm water where species that can't tolerate strong currents can hang out.

The author goes on to describe how the calm and clear water behind the dam of a fallen beech provides the conditions needed for the nondescript fire salamander to thrive. Stream of water, stream of traffic. Fallen beech, road-closed signs. Fire salamander, little boy. Tiny pockets of calm water for hanging out in, a section of asphalt safe for making snow angels. The equivalences are striking.

Roads aren't really closed for festivals. It's more like they're temporarily dammed so that other life can hang out for awhile.

This temporary damming happens in other ways, making other places, in time. A portion of 102 Ave is closed to allow LRT construction in downtown Edmonton—a road hockey game breaks out. 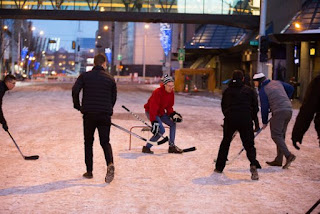 Who hasn't hit a crosswalk button every now and again to make the temporary space for a carefree, eight-block pedal? 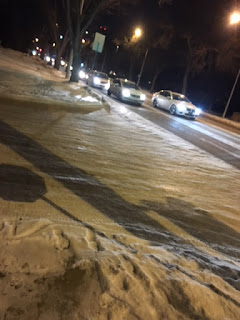 And then there's the mother of all berms, the one in the North Saskatchewan River that created Accidental Beach. 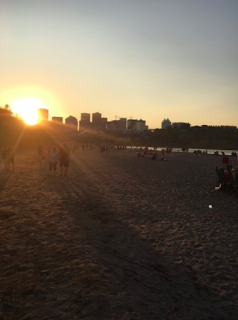