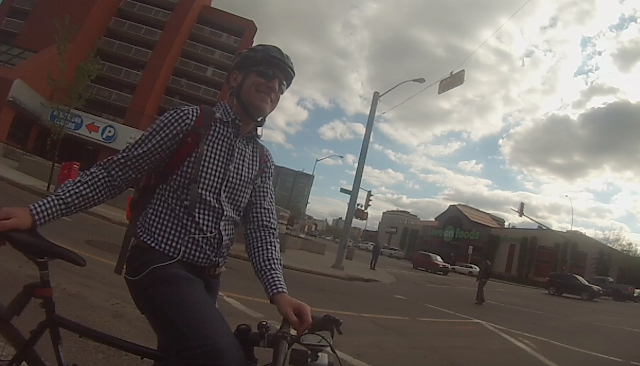 The examined ride is worth reliving.

It started when Tim caught up to me on Jasper Ave this afternoon. By the time we reached Railtown, we had had a good talk about our public duties as bicycle riders. He shared a story. I shared mine about the day last week I watched, while stopped, a fellow bicycle rider fly through a red light, oblivious to the couple who had the pedestrian-walk right-of-way, narrowly missing them.


I told him I was surrounded by a double dilemma before I could check to see if my Go Pro had captured the scene. First, I routinely share images of automobile drivers showing disrespect to bicycle riders and pedestrians. Left turners, crosswalk deniers, bike-bus-taxi lane interlopers, middle-finger wavers and the rest of the fish in the barrel. But what to do now? Here was a member of the club behaving badly. Do I share the image, or quietly censor it? Then, what to do about the actual bicycle rider? Do I try to catch up and share my thoughts? I did. And when I got home, I did share the image on social media.

I did and I did because what animates me in those situations is not cars versus bikes, or bikes versus pedestrians. It's power that can't correct itself.

Tim and I discussed these things as we pedalled together, and these things were still turning around in my head as I approached the stone bridge on 102 Ave. A bicycle rider a few feet ahead of me had pedalled onto bridge's narrow sidewalk and then hit the brakes to let a man and his two leashed dogs, walking in the opposite direction, pass by without colliding. The man tried awkwardly to pick up the dogs to protect them, but they squirmed free. They seemed skittish. He was frazzled. I was stopped at the entrance to the bridge and heard him quietly curse the bicycle rider who had not waited where I had stopped.


"At least one of you can read," he huffed. A sign, routinely ignored, especially when the bridge is empty of pedestrians, orders bicycle riders to dismount. This is bad design, some bicycle riders think. As he passed me, the man said his dogs are scared of bicycles. I nodded and said the bicycle rider in front of me had done good by not flying by him, but he was having none of it.

When I got to Glenora School, more inner urban drama was waiting. The traffic light was in my favour.  Eastbound and westbound automobile traffic stood artificially still while the pedestrian clock ticked down. I calculated and decided to go for it and I got across safely and as I looked up I saw a young girl on her bike on the opposite corner who knew enough to not do what I had done and her parents were with her and I thought I probably should have read the situation better and waited on the far corner and not provided a big example of what her parents had likely drilled into her to be an unsafe move. In a previous millennium, I was a young parent. It was tricky to teach the boys the ultimate danger of an open crosswalk bristling with stopped automobiles on countdown for re-ignition.


"Wow, nice bike," was all I could come up with. Everyone smiled.

The dogs, the girl, the light, the redlight runner, the battle with the censor, the talk with Tim—all of this sloshed in my head as I hit the 142 St bridge over the MacKinnon Ravine. A bicycle rider was approaching from the opposite direction. I stopped and waited for the rider to go by, resting my foot on the guardrail for balance.

And then on the bridge over the MacKenzie Ravine, another character decision as a pedestrian strolled off the bridge and through the concrete pillar gate. I stopped to let her get through, keen not to alarm her. She smiled.


There are bicycle commutes where the road travelled is simply a path to get from A to B. And then there are other days, like today, when the road is a stage that lets us see where we're at with each other.