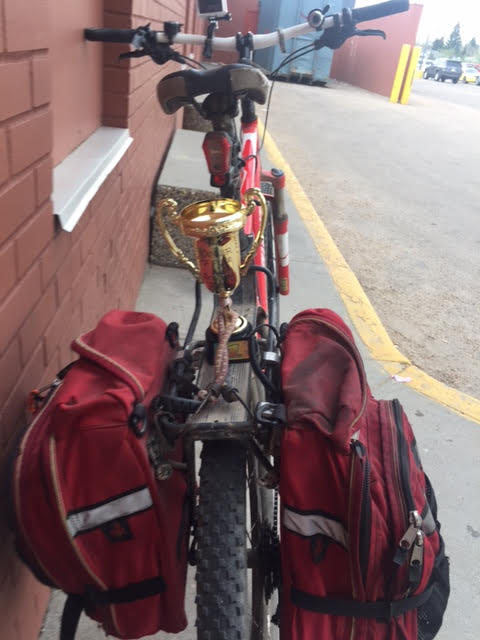 At Andy's IGA we glided to a stop and Shelagh went in to get some groceries for supper. I stayed behind to mark the bicycles.

A tall figure rattled his shopping cart past the bench I sat on. He had just finished his shopping trip. His cart was overflowing with plastic bags bulging with the shapes of concealed packages and cans and pieces of fruit. He had spent a lot of money, I thought. The man was pushing the cart, but he also seemed to be steadying himself with it. His tan jacket was unzipped even though rain was falling. His pants flapped around his ankles as the wind blew. The ashy, orangey tip of a cigarette looked like a dead fuse as it hung from his bottom lip. He coughed. He stopped in front of me. I decided to slowly pick up and go to cleaner air. I have a chronic bronchitis condition.

"What's the trophy for?" he asked, pointing at the back of my bicycle. His voice was lighter than I had imagined.

Earlier in the afternoon I was at a team-building bowling competition at the Bonnie Doon lanes. My friend Kellar had tricked up a toy trophy for the first round high score. My 187 was good enough for the hardware.

The man's taxi had arrived. The driver sounded the horn.

He was animated now. Even the cigarette looked like it had more life.


The man told me the key was to not look too far ahead. Don't worry about the pins, he said. Use the arrow markings on the alley, he said. And don't move your body too much. Keep it simple. He grabbed an imaginary ball from the air and, right there on the sidewalk in front of Andy's, delivered it with a three-step approach this way, and then threw the next frame back the other way, and then, so that his lesson took hold in me, back again the other way. It was sidewalk bowling ballet in three acts from a different time.

The taxi driver had gotten out of the vehicle and opened the trunk and motioned to the man to wheel the groceries over and load them into the trunk, open now and looking like a giant steel maw.

I have a chronic bronchitis condition, among other conditions.

I was nodding to myself in a bitter, silent conversation as Shelagh came back out of the store.