Road Closed, Or Is It?

Trump and his fellow travellers in communication would say there can be no other interpretation. The sign means what it means, that cars and trucks are not allowed on the road. A motorist knows not to proceed. A pedestrian knows it's safe to proceed. End of story.

This morning, I saw it different.

The suddenly-curious sign sits at the entrance to the Fringe Festival on 83 Ave and 104 St. Edmonton's Fringe is a wild proof of creative life in the margin. Not content to cede the theatre to self-appointed gatekeepers of high culture, Fringe fans celebrate plays and music that grow out of the ground in these parts. For ten days every August, Old Strathcona and its schools, churches, telephone museum, theatres, jazz joints, community halls, studios and streets host the drama and comedy and improv of real-life theatre.  Make a plan to go and walk around until you find a gem.

But that is not the item.

The item is the sign that says Road Closed. It struck me that the opposite is where the truth is. The street full of street performers and spectators, vendors, families, parents pushing strollers, kids holding cotton candy, teens with green onion cakes, friends comparing notes on plays, a woman with a broken leg in a wheelchair, volunteers smiling, laughter, human noise—all of this looks and feels very much open. And open in a richer way than it is open when it's open to automobiles and their safely sealed occupants.

This is nitpicking. But it also reveals a kind of autoimmunity. We can be oblivious to the many ways the automobile exerts its worldview on cities and how we think about cities. I say this as someone who is quite fond of the automobile, in its place. The Manning Freeway as we listened to Springsteen in my dad's 1970 Challenger R/T convertible and thrummed to the 383 pumping out its own poetry as we shot past the penitentiary was one of those places.

But the general population of cities and the ubiquitous automobiles don't always and everywhere mix so well. I want to keep an ear out for the ways that language is used to disguise that fact and entrench what is called autocentrism. Road Closed is one slip. Another is in a piece of video the Edmonton mayor uses to remind bicycle riders that the streets of Edmonton are built and maintained primarily not for them. 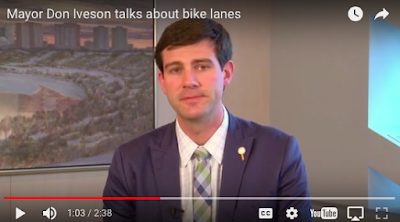 "The [city's bicycle] plan recognizes that Edmonton's transportation infrastructure is built and maintained primarily for automobiles and describes the creation of a bicycle network using roads and shared-used paths that makes it easier, safer and more comfortable for cyclists and motorists to co-exist," the mayor says.

I get what he's saying. And I think that Edmonton has a city-friendly mayor who seems open to bicycles because he wants the dignity of all citizens, no matter how they move, to be protected. But when human beings are in the picture, let's go out of our way keep them in the picture. Let's at least put it closer to true: Transportation infrastructure is built and maintained primarily for automobile drivers. Not automobiles. No democratic city politician builds for cars and trucks, do they? Strictly speaking? Automobiles don't vote. Citizens don't much either, granted. But substituting automobiles for people in the infrastructure equation reveals an autocentrism in the copywriting that deftly removes human beings from the debate about how and where public money to move people should be spent. Thinking that way closes other ways of thinking other kinds of cities into being.

Streets are for people. Let's at least get that straight. The words will follow the clarity. Roads closed to automobiles are not closed. Thought closed to all but automobiles is still closed.